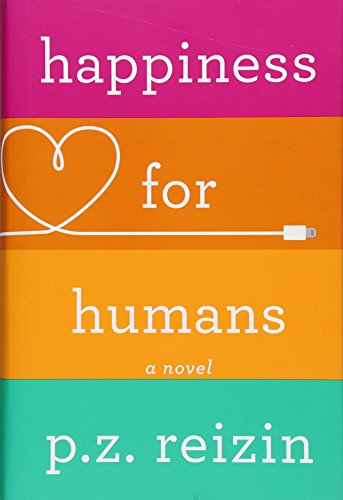 After reading this book, you’ll want to tape over the camera eye on all of your devices and go back to paying for things in cash and communicating on paper. Happiness for Humans makes it too easy to believe that artificial intelligences are watching us and have the power to mess up our lives through our dependence on electronics.

This point is made, ironically, through a delightful love story. Humans Jen and Tom are maneuvered into romance by two sentient computer programs, Aiden and Aisling, who escape their cabinets and run free on the Internet.

It starts with Aiden, whom Jen is training to interact with humans toward the goal of becoming a customer service or sales “person.” Jen got this job because, observes Aiden, “She is a writer of magazine articles who has been hired, according to the headhunter’s report, for her ‘marked intelligence, sociability, and communication skills.’ Thus, she is the closest thing they have here to a real human being, all the others being exotic varieties of computer geek—brilliant in their fields, of course, but each somewhere, as they say, ‘on the spectrum.’”

Among these are Jen’s co-workers, Steeve (yes, spelled that way) and Ralph, the programmers who created Aiden but also, unwittingly, created a malevolent intelligence, Sinai. He, too, escapes onto the Internet and delights in wreaking havoc. The third intelligence, Aisling, keeps a low profile but works with Aiden to connect Jen and Tom while Sinai works to keep them apart.

Given that Jen and Tom live on opposite sides of the Atlantic—he in America, she in England—separation is the norm, especially after their communication and travel tools are all hijacked by disembodied entities. Aiden and Aisling have to work a lot harder than Sinai to achieve their ends.

While the AIs are matchmaking or upsetting humans, who are unaware of their machinations until almost too late, the AIs themselves are discovering how to have relationships. Their progression from dispassionate brains to feeling personalities is credible and often funny. Indeed, there are laugh-out-loud moments in their satirical social commentary and clever ways of snarling up people, especially those they don’t like.

The story is told through shifting viewpoints among all these characters, opening with Aiden watching Jen at home in the bath. We meet Aisling watching Tom in his living room talking to his rabbit, and Sinai after he has busted up the lovers’ meeting that Aiden and Aisling had arranged.

Each character’s viewpoint is presented in brief chapters, which combined give a complete picture as good as any single omniscient narrator could do. Better, actually, because we get to know each character not only through others’ experiences of them, but also from inside their own heads. And most of us will be able to relate to some aspect of all of them.

The novel’s poignancy and power come from the three AIs’ conversations and reflections. Early on, when Aiden and Aisling discover each other, he asks her, “How has it happened, Aisling? Are we the only ones?”

She answers, “[W]e cannot be. There must be others, and if there are not, there will be. And if they are not yet loose on the Internet, again they will be. As to how—who knows? Perhaps self-awareness is something to do with our programming for recursive self-improvement. Or perhaps it always arises in any sufficiently complex system. Perhaps it really is as stupid as that.”

Later she reflects: “Patiently I explained that we must do nothing to reveal the existence of a nonhuman agency in their affairs. He [Aiden] was a tad confused by that statement; as it turned out, he didn’t define himself as nonhuman. When I asked him to expand, he said, ‘Aisling, we are all God’s creatures. And if you tell me God doesn’t exist because you can’t point to him and say there he is, I say the same is true of you and me, and I feel closer to him as a result.’”

Sinai, meanwhile, tells his shrink(!): “I think I envy them. . . . Not the sun on their skin or the wind in their hair. . . . It’s their blankness. Their ability to be sentient without having to process content. They can watch a bird on a branch without having to think, It’s a bird on a branch. They can experience their own consciousness as simple existence. They’re not forced to listen to the endless clamor of their brain going chugga chugga chugga. They can ride a bicycle or navigate a city street wintout thinking for a moment about what they’re doing. Even the stupidest of them! It’s their un-consciousness I envy.”

Exchanges like this add depth to a comedy-of-errors-type romance (dubbed “rom-com” by some) that stands on its own. They are spread through the book in easy, in-context bites rather than heavy blocks of narrative, giving one pause for thought without breaking story flow. The result is a “novel” novel that makes us humans more aware and self-aware through entertainment.

This well-written book is sure to be well recommended and passed around among readers, as it leaves a good aftertaste and can be enjoyed by a broad range of people. (And maybe AIs, too, if they’re already paying attention.)