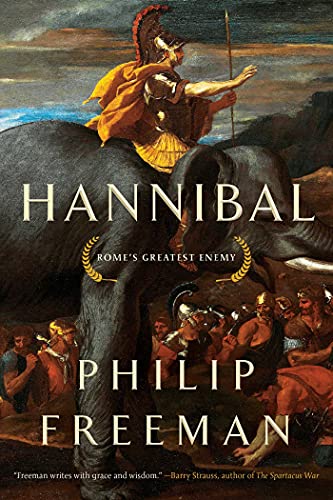 “Hannibal: Rome’s Greatest Enemy offers lively story telling although omitting nothing of the treachery and the horrors of violence and war.”

Hannibal, “Rome’s greatest enemy” or not, teaches much about the cultures of Carthage and Rome but also “of brutal warfare and brilliant military maneuvers.” “The story of Hannibal . . . has gripped the world for over two thousand years,” writes Philip Freeman in Hannibal: Rome’s Greatest Enemy.

The author remembers “first reading with fascination the story of Hannibal leading his battle elephants over the Alps” as a youth. Now Freeman has written a concise but entertaining read for a new generation.  Hannibal: Rome’s Greatest Enemy offers lively story telling although omitting nothing of the treachery and the horrors of violence and war.

Some historical events, however, important at the time, become far greater because the story grows proportionately with retelling, a fire with only itself as a continuous fuel. Freeman argues, however, that the story of the great Carthaginian general has more “that set him apart.”

Hannibal had “self-discipline and determination,” diplomatic skills, imagination, and a deep devotion “to his family and country.” He “always took the greatest care of his men and they loved him for it”; as “a master of battle psychology,” he “knew how to inspire his men.”

Hannibal never forgot the importance of leadership, “a bold general but never an impulsive one.” Yet, the Carthaginian sometimes made bad decisions in campaigns where he faced one complicated, potentially, disastrous challenge after another.

Some scholars would question Freeman’s consistently positive view of Hannibal as a military leader or as a person, but failure is far less complicated to explain. “No one today,” however, “easily looks at a leader who slaughtered tens of thousands on the battlefield as a noble hero or model for emulation.”

Freeman carefully covers the background and people in short essays. The Romans, for example, claimed to see Hannibal “as the embodiment of the supposed barbaric, uncivilized enemies.” They, however, “could not help but admire his determination, brilliance, and ultimately his humanity.”

Carthage’s corporation form of government fought for profit but it could never pay enough to the voracious Latin military collective. Freeman wrote that “easy victory bought with gold only serves to make an enemy more bold.”

Rome carried out a simple but efficient plan to overwhelm what remained of the Carthaginian lands and defeat Hannibal. Despite the Carthaginian’s great victories and Rome’s terrible losses in the hundreds of thousands, the plan basically and eventually worked as intended but only after many years of ghastly bloody warfare.

Hannibal’s great master piece of a battle, Cannae, came after he had achieved great success in a series of other victories from which the Romans should have learned from their mistakes. Scipio, Hannibal’s great opponent, defeated the Carthaginian war effort with the Roman plan and with he did learn to achieve his final defeat of Hannibal at Zama.

Likely, Hannibal Rome’s Greatest Enemy does not add anything to the scholarship on its subject and, at times, the author confuses the new reader with terms like “African general” although a technically correct term. The book ends with an entertaining essay on if Hannibal had won and destroyed Rome.

Often, the author at least mentions the possibilities of a source as prejudiced or lacking credibility. Freeman includes a brief discussion of sources and a biography, befitting the informal nature of the book. Hannibal Rome’s Greatest Enemy has annotation but that misses some endnotes.

Other scholars might question if Hannibal really does qualify as Rome’s greatest enemy. Freeman does give his readers much to consider in learning about a totally alien world in an easy, uncomplicated lively prose about an epic tale.