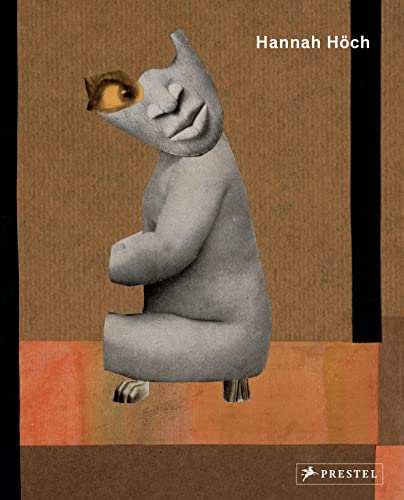 Hannah Höch is the paperback version of the catalog that accompanied a 2014 exhibition of Höch’s work in the Whitechapel Gallery, London. While a little bit after-the-fact, it’s still worth reviewing this artist. Of course, she still has things to tell us, even after all these years.

Höch (1889–1978) was a bit of a conundrum. One the one hand, three cheers for her witty intelligence, her strong character, and her philosophical pragmatism. Any woman who could take on the political discord, the sociocultural decline, and the economic hardship of Weimar Republic Germany (1918–1933) by engaging in some pretty outspoken art had to have some backbone of her own.

On the other hand, most of Höch’s bizarre oeuvre is impossible to interpret, as it is based on the long-forgotten current events of early 1900s Berlin, and the majority of her intelligence, character, and pragmatism go unseen. Höch was a woman of her times. She straddled the Modern Woman image promoted in German media with the reality of the firmly rooted patriarchal system. She was bold and inventive, yet remained in the background, plodding along eking out a career in the arts from 1910–1970s. Fortunately, Hannah Höch, the catalog, offers a translation of some of her pieces and builds up the context of life in Weimar Germany through a variety of essays.

Although her productivity extends beyond this, she is best known for her Dada-era collages. Höch’s cut-and-paste collection ranges from intense political satire (Cut with the Kitchen Knife through the Last Weimar Beer-Belly Cultural Epoch in Germany, 1919–20) to commentary on Feminism (Fashion Show, 1925). These topics are fitting for Höch. Her involvement in the Dada program seemed only natural at the time. Her collages, “reveal her sophisticated awareness of debates about the relationship between the sensual and the intellectual components of human experience and their relevance to her own position as in independent woman.”

The company that Höch kept was reminiscent of a surrealism rat pack with Jean Arp, Max Ernst, Raoul Hausmann, Otto Dix, Kurt Schwitters, and others bantering about current events around the coffee table like angsty revolutionary teenagers. “The Dadaistic person is the radical opponent of exploitation; the logic of exploitation creates nothing but fools, and the Dadaistic person hates stupidity and loves nonsense! Thus, the Dadaistic person shows himself to be truly real, as opposed to the stinking hypocrisy of the patriarch and the capitalist perishing in his armchair.” One can almost feel the feisty energy lingering in the cigarette smoke.

Harmless enough, but threatening nonetheless, Dada came to an end with the raising of a hand to Heil Hitler, forcing the group to disband and disappear to save their lives. Höch was not exempt from the Nazi surveillance machine and moved out of their line of sight, hiding herself in the country along with most of the Dada art. In spite of all the hardships and restrictions of those times, Höch was able to travel, explore her creativity, and experiment with gender roles and sexuality.

Hannah Höch may not be promoting a current exhibition, but the book is still a valuable read, helping to unravel the conundrums she exudes. Höch’s significance rests not only in her artwork, but in the way she lived her life and the unprecedented times she lived it in. Her life and her work need to go hand in hand in order to decipher the hidden mysteries of either. The essays and plentiful images in the Hannah Höch catalog serve as an entry point guidebook to exploring both Höch’s life and her artwork.