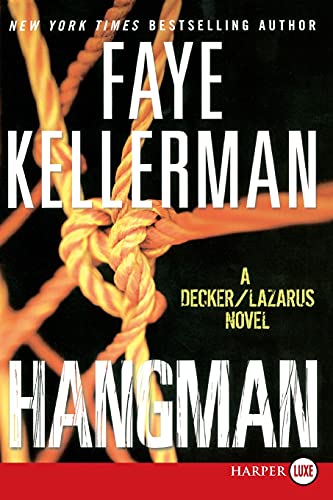 Beautiful yet vulnerable, Teresa McLaughlin knows how to push people’s buttons to get what she wants; she’s had lots of practice during her volatile fifteen-year marriage to Chris Donatti, who morphed from her high school sweetheart into a professional killer. That’s how she met LAPD Lieutenant Peter Decker, the detective working on Chris’ case shortly before Chris and Teresa were married. Now Teresa abruptly reappears in Decker’s life to ask a favor of him—a favor he knows will draw her sociopathic husband back into his life as well.

Reluctant to become involved, Decker asks advice from his wife, Rena Lazarus, knowing she will disapprove:

“A little late for that, don’t you think?”

Rina continues this back and forth with Decker, pointing out the reasons he should say no while emphasizing the reasons he cannot refuse to help Terry. At the bottom of her list is the fact that Terry is beautiful; the list is topped with Rina’s desire to keep her husband from being shot again. Then, too, what about the boy—Terry and Chris’s teenage son, Gabe?

Within hours, Decker regrets becoming involved. Terry is missing; Donatti disappears; and Gabe is homeless. Refusing to leave the precocious 14-year-old on his own, Decker and Rina take in Gabe temporarily. Now Decker worries about the father’s influence on Gabe; how safe is his family with the boy in the house? Will Gabe’s presence draw Chris to them, creating even more danger for Decker’s family?

Fate will not allow Decker to focus just on his family concerns or to bemoan the fact that he is on the verge of turning 60, nor that he sincerely wants to reunite Terry and Gabe; murders continue to happen. Throw into this turmoil a nurse, Adrianna, from St. Timothy’s Hospital, who is found dangling from the rafters in an upscale house under construction six hours after her shift ends. Decker calls in his team of topnotch investigators, led by Sergeant Marge Dunn, a large woman with an even bigger heart. While investigating Adrianna’s death, trying to determine whether it is related to her eclectic lifestyle or whether a crazed killer is on the loose, other murders by strangling occur; and where is Adrianna’s boyfriend?

The team is led from L.A. to Los Vegas and back, left wondering if there could be two serial killers afloat or just one with a long-term voracious appetite for human extinction. And where is Terry? Is she really in harm’s way, or could she have concocted a complex plot to leave her son with the Deckers, knowing Gabe will be well cared for while she escapes the deadly clutches of her husband? Too many questions, too few answers.

Just when the reader decides that one talented detective can’t possibly stretch himself far enough to solve all these crimes, Detective Peter Decker writes a report, that readers become privy to, in order to summarize everything that has happened, showing a satisfactory ending, not necessarily a happy one, for all concerned. The report hints at what lies in the future for those who remain alive and explains the whys and wherefores of the demises of those who have passed on.

Faye Kellerman does an excellent job of describing her characters making the reader feel connected to them; her descriptions of time and place excel as do the alternating scenes throughout the book to tie all action together so the reader is not lost in the maze or left mystified.

The one shortfall with Hangman is the truncated ending. After being spoiled, feeling like a participant in the investigation throughout the book with precise character development and meticulous detail of police procedures, the report summary gives one a sense of being left out of the concluding action. In spite of the one deficit, Hangman is a must read for fans of the thriller and suspense genres. They will find that even the ending, though less satisfying than the rest of the book, is a well executed way of wrapping it up and tying it all together.

Faye Kellerman has authored 27 novels, including 20 New York Times bestsellers featuring the husband and wife team of Peter Decker and Rina Lazarus. She has teamed with husband/author Jonathan Kellerman for two short novels and more recently with daughter Aliza to cowrite the young adult novel, Prism. The Kellermans live in Los Angeles and in Santa Fe, NM.