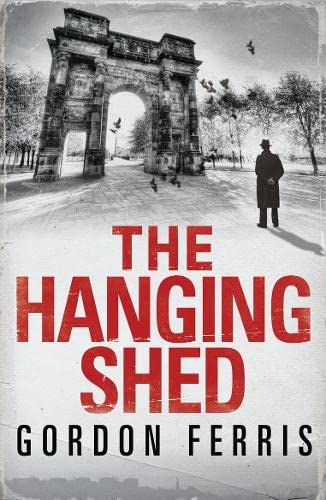 Every now and then you come across a writer and wonder—while reading his or her latest tome—how on earth you haven’t read their books before. The first page of The Hanging Shed by crime writer Gordon Ferris begins with one of the most chilling paragraphs to grace a crime noir book in years:

“There are no windows in a hanging shed. Only a sadistic architect would provide a last glimpse of the fair green hills. The same goes for paintings or potted plants. You’re unlikely to divert the condemned man from the business in hand with a nice framed ‘Monarch of the Glen’ or a genteel aspidistra. Besides, he’ll only visit once. Wearing a hood.”

Of course, it’s not too long before we discover that the hanging shed is an innocuous term for perhaps the most ghastly of places: the gallows, a genuinely deadly stage of no return.

Ex-policeman Douglas Brodie, now a reporter for the London Bugle, is thinking of the hanging shed while on The Royal Scot, the night train to Glasgow. It’s the year 1946. The last time Brodie was home in Scotland was in 1942, a proud young man in army uniform. A few days earlier while relaxing at home, Brodie receives a phone call from a ghost, Shug Donovan, a childhood friend/foe, now incarcerated for the most vilest of crimes: the rape and murder of a young local boy.

Brodie is somewhat shocked upon hearing the voice from the past, as he had been told Donovan was dead, killed in a flaming plane, years back, during the war. Brodie, at the time was actually heartened at the news of Shug’s death, blaming him for stealing his beloved girlfriend, Fiona, such was the bitter animosity he held against his one-time friend. Now, he was being asked to save him from the gallows, something Brodie doubts he really wants to do.

When Brodie finally meets Donovan at the prison it is no longer the young man he remembered from his childhood days, and Brodie thinks it would have been kinder for Donovan had he been killed in that flaming plane. What greets Brodie is a man who returned from the war unrecognizable: mutilated and horribly burned. It doesn’t help that Donovan had become a heroin addict on the outside, only venturing from his home to get drugs to deaden the pain of unbearable wounds.

Donovan claims he’s innocent, of course, but the mountain of evidence implies otherwise. Despite the hideousness of the crime, Brodie feels suddenly compelled to try and help Donovan. Working with advocate Samantha Campbell, Brodie trawls the mean streets of Glasgow’s tough Gorbals and the green hills of western Scotland in their search for the truth. What they find instead is an unholy alliance of troublesome priests, corrupt police and Glasgow’s deadliest razor gang, happy to slaughter to protect their dark and dirty secrets. As time runs out for the condemned man, the murder tally of innocents starts to climb.

As in the best of noir fiction, Brodie’s universe is devoid of moral certainties, and when Samantha disappears, it’s the last straw for Brodie as he reverts to his wartime role as a trained and lethal killer. The gloves finally come off.

The Hanging Shed is a must-read, and not simply because of Mr. Ferris’s distinctive style of writing, but also for the dark, subterranean, Scottish world he has stylishly created—and its disturbing insights into the dark side of the human psyche.

Riveting and arrestingly violent, it’s an on-the-edge-of-your-seat thriller, and Mr. Ferris has confirmed himself as an exciting and original voice in the crime noir genre.