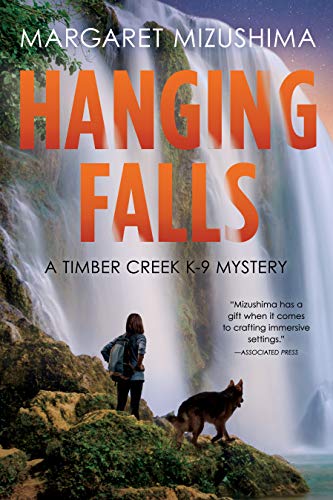 It’s a common theme in contemporary crime fiction for the protagonist to have a painful backstory that motivates them to pursue a career in law enforcement. They want to help obtain justice, peace, and safety in the world, to spare other people from the nightmares they experienced.

This motivation applies to Mattie Cobb, the protagonist of the Timber Creek Mystery series.

Mattie has found her place in the world in Timber Creek, Colorado, as a K-9 handler. Partnered with her German shepherd, Robo, an exceptional tracking dog, she pursues murderers as well as lost persons. In six volumes so far she has helped solve crimes and bring resolution to people hurt by them, thereby living her purpose.

This case opens with Mattie and a colleague discovering a corpse trapped in a tree fallen into a river during a spring deluge in the mountains. The body has to be retrieved before the roaring waters rip it away to be unfound again forever.

Mattie, a disciplined athlete, risks her life to extract the body, and thus enables an investigation to be opened. It leads promptly to another killing, giving Mattie and her office two murders to investigate.

Clues lead to newcomers into the area: a fictional version of Mormons, with old-fashioned clothing and technology, conservative religious views, and polygamous family relationships. They rub wrong against certain locals, introducing red-herring conflicts. Ultimately they invite suspicion when one of the murder victims is tied directly to them.

Mattie is interested in their affairs only in terms of how they might pertain to the case. She has her own relationship issues to deal with. Between a pending reunion with her long-lost family, and an edgily budding affair with the town’s veterinarian, Cole Walker, an on-call deputy who’s having relationship issues of his own with his daughters after his divorce, the inhibited and insecure Mattie is challenged to fit all this in around her official duties.

But duty comes first with Mattie, which keeps the story on its mystery track. The personal details help flesh out character development over what promises to be a long-running series.

The personal-to-professional ratio is what makes the series work. It is a police procedural at heart, and the author makes sure that procedure drives the story. She also makes sure that the animal aspect of it is spot-on.

Readers drawn to the series because of its canine quotient are not disappointed. Robo is as much of a character as Mattie and her friends, boyfriend, relatives, and colleagues; at the same time, Robo is clearly and realistically portrayed as a dog. The most interesting parts of the book are when Maggie and Robo interact, and he does what he’s trained to do. The process and results are believable and informative.

Also persuasive is the outdoor setting of Timber Creek. Much of the action throughout the series takes place in the Colorado mountains, where weather is a huge factor and people cover rough territory on foot or horseback. Hanging Falls, in particular, pits the characters against the elements in multiple scenes. We feel the wet, the cold, the danger of lightning, the ragged terrain underfoot, the constrictions of visibility when trying to find something or dodge gunfire. We see how easily one can get into serious trouble in a moment of distraction.

Tying it all together is the author’s straightforward voice. No “stylin’” in these stories. Sentence A leads to sentence B; plot development C leads to plot development D. Any sidetracks don’t go far and loop back to the central premise. In this respect Hanging Falls and its predecessors are coherent and reliable and easy to read, meanwhile delivering complex murder cases and interrelationships.

The combination makes for restful yet stimulating reading. It’s tempting to describe the book[s] as “vanilla” for lack of extras. But vanilla is the foundation flavor of ice cream, and sometimes it’s more tasty and satisfying than flavors loaded with candies and crunchies.