The Handsome Monk and Other Stories (Weatherhead Books on Asia) 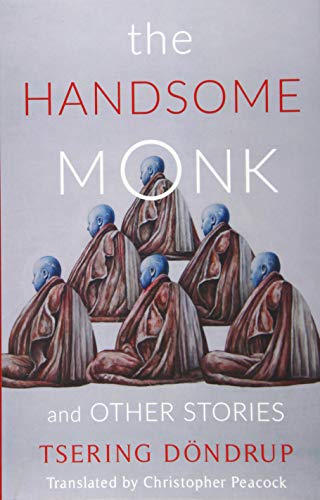 “The Handsome Monk and Other Stories is engaging, charming, and often dark. It offers a rare and apparently honest view of modern Tibet . . .”

Tibet’s mythic existence dominates its presence in the global mind. Tibet hovers above the mundane world, buoyed by prayer flags and weighted by disrupted independence. Westerners come seeking enlightenment, and they find it: “Wow! It’s really true what they say about Tibet being the last untouched holy land on earth. How incredible! Absolutely wonderful!” Better than a theme park, more “authentic” than any other potential destination, Tibet blurs its borders not with China but with Shangri-La (itself a Western fantasy of the last, most exotic Orient).

In his stories, Tsering Döndrup evokes a radically different Tibet. This Tibet isn’t frozen in the cultural moment before its 1950–51 rule by China; instead, it’s a living place, the territory of an official “cultural minority” that keeps mostly to itself and avoids Chinese contempt and bureaucracy as much as possible. Rural life still dominates, but urbanization pulls farmers and herders out of their traditional lives and into “Happy Ecological Resettlement Villages.”

Döndrup is part of a small but vibrant Tibetan-language literary scene. Though ethnically Mongolian, he was born in a Tibetan-Mongolian region where the people have gradually assimilated into Tibetan culture. Though the Tibetan language has a long poetic tradition, its body of prose fiction remains small. As such, Döndrup’s stories lay a foundation for what may come. Yet he manages to go beyond “slice of life” simplicity. His stories reveal the absurdities and frustrations of Tibetan daily life, and satirize both Western romanticism and Chinese exploitation of his home.

The best known of Döndrup’s stories is “Ralo,” the multi-chapter tale of a hapless man, orphaned early and wretched at school, who staggers through the life of his country with a cheerful suffering to rival Candide’s. Ralo’s presence is unmistakably repulsive: snot runs down his face, and his Tibetan braid is thick with lice. He embodies every negative stereotype, and yet his persistence is charming. He becomes a monk, thrice a husband, and a pilgrim. He suffers terrible losses, yet somehow survives, spending his last years living with a ragged dog he insists is the reincarnation of his mother. The neighbors who donate his remaining possessions to the local monastery regard Ralo’s death with wry inevitability: “’On mani padme hum,’ someone said on the way back. ‘Even if he’d left a will, that’s all there would have been.’”

That wry acceptance of suffering marks a tone that runs along the stream of Buddhism without ever touching reverence. The faith of Döndrup’s characters is cultural and steeped in cynicism regarding lamas who demand enormous gifts and flout moral righteousness in favor of fulfilling their own desires. Monasteries, meant to be destinations in themselves, become resting points in larger, more complex personal journeys, as in the title story. Its protagonist hovers on the brink of abandoning monkhood, loving a prostitute but unable to give up his robes.

The stories of human suffering are mixed with genuinely funny tales in which the faithful and the corrupt come before the Lord of Death for judgement. In “A Show to Delight the Masses,” a corrupt county governor dies, and before final judgment demands a full trial, wherein his virtues and sins are recited in elaborate verse. “One Mani” shows two friends awaiting judgement. One has recited 99,999,999 of the manis needed to attain the blissful realm. The other has, in his life, recited only one. Surely one of them could achieve paradise, if the math works out?

Other stories are less easy to classify. “The Story of the Moon” ventures into science fiction. “A Formula” moves with magic realist fluidity through decades in a moment. “Black Fox Valley” explores the aches of forced relocation, and the dark secrets of Chinese administration in Tibet.

The Handsome Monk and Other Stories is engaging, charming, and often dark. It offers a rare and apparently honest view of modern Tibet, one in which global politics are less urgent than the care of animals and pasture rivalries. The stories are distinctly un-western, but they remain accessible and fascinating. Döndrup’s fiction reveals the power of a literary tradition still in the process of defining itself and its possibilities.