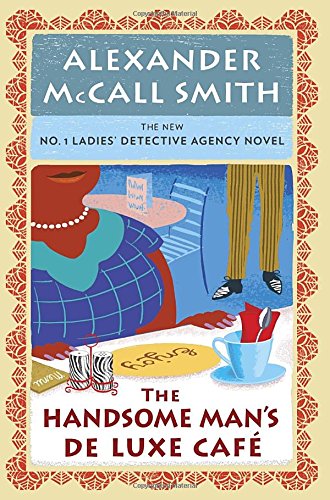 It’s hard to imagine that anyone who reads fiction hasn’t discovered this series. For those who know and love it, here is number 15, in all its gentle delight. For those unfamiliar, this volume is as good a place to start as any—though of course it’s always more meaningful to read a series from the first.

In all volumes, Alexander McCall Smith delivers quiet stories about everyday people through the investigations of the No. 1 Ladies’ Detective Agency, the only such outfit in Botswana, run by the “traditionally built” Mma Ramotswe.

Her investigations, aided by her secretary-now-partner Mma Makutsi, run the gamut of domestic conundrums. The pair always finds a solution somewhere, often unexpected, and always nonviolent. Technically, these stories are mysteries, but so different from the norm—even the coziest of cozies—that they fall into a class by themselves.

Mma Ramotswe specializes in helping people “see that the world was not always a place of pain and loss, but a place where our simple human affairs—those matters that for all their pettiness still sometimes confounded us—were not insoluble, were not without the possibility of resolution.”

Each book, including this one, comprises two or more cases, adventures, or situations. All are small in the grand scheme of things but important to the people affected. This time, the book has a more personal focus, with one client case taking background to two internal affairs.

In a series this long, characters and circumstances evolve. While Mma Ramotswe holds fairly constant, her supporting cast find their way into all sorts of dilemmas in pursuit of their ambitions. Mma Makutsi, now a wife and mother, undertakes opening The Handsome Man’s Deluxe Café. Being a babe in the restaurant world, she sets herself up for an embarrassing fall.

Meanwhile, Mma Ramotswe’s husband, Mr. J. L. B. Matekoni, is forced by slow business to lay off one of his apprentices, the useless but charming Charlie. Mma Ramotswe attempts to find him work in her detective agency, to a predictable end which leads, unpredictably, to a surprise resolution characteristic of these stories.

The client case involves finding the identity of a woman with amnesia. Mma Ramotswe solves it through her unique perspicacity and good old-fashioned footwork. She wonders, in the process, “How did one remember that one took sugar, or were there some things that the body knew? Did those things—and perhaps things of the heart—survive the loss of memory, so that part of you, at least, was still there?”

Philosophical questions and ruminations like this keep Mma Ramotswe going. For instance: “The world was not perfect—it never had been and never would be; it was full of pitfalls and problems, of fear, of regrets and of bitter tears. Here and there, though, there were tiny points of light, hard to see at times, but there nonetheless, like the welcoming lights of home in the darkness. The flames that made these lights were hard to ignite, but occasionally, very occasionally, we found that we had in our hands the match that could be struck to start one of these little fires.”

Such soliloquys lead often to reflections about her homeland of Botswana, a country not commonly discussed in the western world but deeply precious to Mma Ramotswe. She shows it to us as a peaceful, dry land filled with kind people, naughty people, poor people, upcoming people, generous ones and selfish ones, all of whom are split between holding on to the old ways and embracing the new.

The culture is why she feels secure in assigning Charlie to a stakeout. “Nobody took any notice of the young man under the tree or of his half-concealed van—why would they? Botswana was a country where people could still sit under a tree and look up at the sky if they so wished, or watch cattle as they moved slowly across the veld, or even just close their eyes and look at nothing because they had seen everything there was to see on their local patch of earth and did not need to see anything more. And even if the young man was dressed a bit loudly, that did not matter, as people could dress loudly if they wanted to, and it was no business of others to pass comment on what they were wearing.”

And so, framing everything within the context of this world, she finds happy resolutions to daunting problems. Following her through the experience keeps readers engaged and hungry for more.