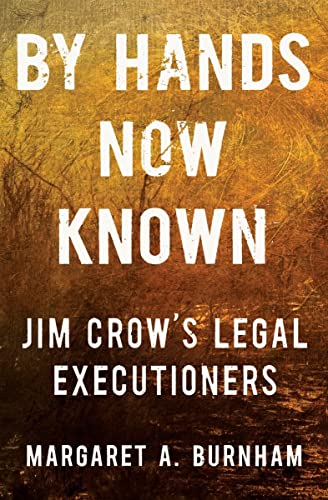 “By Hands Now Known makes an authoritative argument for reparations and restitution for the families and communities whose lives were destroyed by Jim Crow crimes, and for whom not just the personal pain but the economic and social impact of these killings continues to be felt in demonstrable and often quantifiable ways decades later.”

Like Richard Rothstein’s The Color of Law and Ira Katznelson’s When Affirmative Action Was White, Margaret A. Burnham’s clear-eyed and unsparing By Hands Now Known makes an airtight argument for the cumulative impact of state-sanctioned and supported racial injustice that demands reparations without primarily focusing on slavery-era crimes.

But unlike those books, which examined the multi-generational impact of 20th century housing discrimination, By Hands Now Known—subtitled Jim Crow’s Legal Executioners—exposes the sheriffs, deputies, judges, and other state-sanctioned actors with licenses to kill (like bus drivers and streetcar conductors) who murdered Black people with impunity or absolved their murderers throughout the Jim Crow era and the Jim Crow South and beyond.

“Lawless police acting on behalf of the state has defined how Black people experienced American law for two centuries,” Burnham writes, “and concomitantly, Black struggles for citizenship and meaningful democratic participation have always included radical demands for relief from such state violence. By Hands Now Known explores what prevented the federal government from stepping in to control police brutality at the local level: why the Justice Department refused to craft an effective campaign to abate the terror, and how the federal courts exacerbated the problem.”

When it comes to assigning blame and achieving some measure of justice for those who lost their lives or their freedom at the hands of this system, it’s easy enough, and not inaccurate, to blame the system itself. But perhaps where that system proved most effective was not just in aiding and abetting these crimes but in summarily sweeping them under the rug, to the point at which identifying the individuals involved in cases whose details have been willfully obscured becomes increasingly difficult.

Just as often, the reason a case was buried was because it never entered the legal system at all; instead of laws being applied unequally in the courts, they simply weren’t enforced when it came to white-on-Black crime. “This rule of nonenforcement,” Burnham writes, “rooted in well-known historical, visceral social norms, reinforced the profound alienation of Blacks from law and revealed the symbiotic relationship between formal and mob law in the Jim Crow South.”

Written by a one-time SNCC staffer, longtime civil rights lawyer, judge, and founding director of the Civil Rights and Restorative Justice (CRRJ) project at Boston’s Northeastern University, By Hands Now Known confronts the problem of exposing individual perpetrators of Jim Crow justice head-on. The book draws on hundreds of interviews and years of exhaustive investigation into the “forgotten history of racially motivated homicides,” with teams of researchers at CRRJ under Burnham’s direction, and at MIT under the supervision of Burnham’s research partner, political scientist Melissa Nobles.

By Hands Now Known also serves as a companion volume to the CRRJ Burnham-Nobles Digital archive, “a collection of public documents and interviews that capture, through over a thousand homicides, the grim history of antiBlack violence in the Jim Crow South.”

The book explores an array of appalling and revealing cases that routinely erased “the boundary between lawfully constituted authority and raw racial violence,” beginning with an exploration of rendition, the convoluted legal process through which states petition for the return of citizens for criminal prosecution, incarceration, or enslavement. These cases range from the familiar saga of escaped slave Anthony Burns to the lesser known struggle of Viola Washington Edwards, a nurse and hospital proprietor who fled to Detroit after her unpopular acquittal in the death of a white woman on whom a member of her staff had performed an abortion, left her with little choice but to abandon her home and family to escape Pensacola, Florida, in 1927.

By Hands Now Known also recounts anti-Black violence on buses and streetcars, where drivers and conductors were frequently armed and deputized to act as agents of local police to maintain Jim Crow segregation on public transportation. Burnham discusses in particular the treatment of Black soldiers on buses, and the retaliatory violence they often faced simply for wearing their uniforms, which implicitly conferred dignity and citizenship (and occasionally, worst of all, superior military rank) even on those deemed lowest caste by regional custom.

Among the more striking cases described is that of Booker T. Spicely, a U.S. Army Private executed on the street outside a Durham, North Carolina, crosstown bus in 1944 by driver Herman Lee Council. After a brief confrontation over Spicely’s refusal to move to the Black seating area, Council ordered Spicely off the bus, shot him, returned to the bus, and continued his route, leaving Spicely dying in the street. (According to local lore, the extent of the provocation for the crime came when Spicely, in uniform, replied to Council’s demeaning racial insults with “The only difference between you and me is you’re 4-F,” although his response is slightly less pointed in Burnham’s account.)

A case rarely discussed, even in Durham, and not widely known in detail prior to the publication of Jerry Gershenhorn’s history of Durham’s Black newspaper and its publisher, Louis Austin and the Carolina Times in 2018, Spicely’s summary execution is rendered with particular poignancy in By Hands Now Known. Burnham provides useful context, describing the prosperous Black business community that prevailed at the time in Durham’s Hayti district, drawing acclaim (along with Miami and Tulsa) from the likes of Booker T. Washington as the home of one of America’s Black Wall Streets. She also identifies the entrenched Black social hierarchy and power structure that existed during the Jim Crow era with the prominence of the North Carolina Mutual Life Insurance and its eminent founders, who insisted on calling the shots when it came to any sort of Black resistance.

Just as compelling is Burnham’s account of the events that followed, in which local tobacco warehouses burned (though no connection to Spicely’s murder was ever proven, area Blacks responded in this manner to other racist killings over the years—see Timothy B. Tyson’s Blood Done Sign My Name), and the War Department opened a wide-ranging investigation into the matter.

Significantly, the purpose of the investigation was not to determine Council’s guilt, or to explore similar incidents or systemic issues on North Carolina buses or the treatment of Black soldiers at Camp Butner or other Southern bases. Rather, the Department dispatched a Black undercover investigator to Durham to determine “whether or not negroes were being influence [sic] by agitators to misconduct themselves.”

Surviving Intelligence Department files on the case contain less information about Council and his actions than Spicely’s alleged reputation as a troublemaker. Burnham continues to track the case for years thereafter, revealing the dogged efforts of Spicely’s siblings to achieve justice for their brother.

Instances of Black resistance—and violent white reaction—also step to the fore in parts of By Hands Now Known, particularly in sections discussing labor organizing in Alabama, and challenges to laws dating back to the declining years of Reconstruction that re-enslaved Blacks through convict leasing and debt peonage (see Douglas A. Blackmon’s Slavery By Another Name), and the violence and abductions through which whites forced and intimidated Blacks into compliance.

Burnham digs into the nature of kidnapping law and its inconsistent and often absurd application to Black Americans, what it says about their citizenship status, and its undeniable reflection of slavery’s legacy. “Although we will never know the real numbers, between the time of the Klan’s post-World War II renaissance and its gradual demise after 1965, a reasonable conclusion is that thousands of Black people across the South were dragged away from their homes or jobs, carried into some remote woods, flogged with straps, pistols, rubber hoses, or cat-o’-nine-tails, threatened with death, and then let go. These narratives of captivity underscore that even at the end of the Jim Crow era, personal liberty was, as a matter of law, shaped by slavery.”

But the overarching purpose of By Hands Now Known—repeatedly, emphatically, and clearly stated—is twofold: first, to say their names, and raise public awareness of not just victims of racial violence consigned to the dustbin of history but, just as importantly, the individual perpetrators of that violence and the state actors who ensured that their crimes would go unpunished.

In fulfillment of its second purpose, By Hands Now Known makes an authoritative argument for reparations and restitution for the families and communities whose lives were destroyed by Jim Crow crimes, and for whom not just the personal pain but the economic and social impact of these killings continues to be felt in demonstrable and often quantifiable ways decades later. Burnham identifies the legacy of Jim Crow justice manifested in a country defined by vast, racial economic inequality; the world’s most massive carceral state; rampant police violence against Black Americans; and state-level efforts to suppress an honest reckoning with the country’s racist past in its educational system (or much of anywhere else).

In that respect, she argues, the United States lags far behind other countries who have actively engaged with “the project of the twenty-first century”: coming to terms with injustices of the past. “Reparation is an interdependent bundle of gestures and practices that involve recognition, truth-telling, apology, and payment—owed to all the victims of Jim Crow injustice,” Burnham writes. “Indeed, the enduring presence of slavery in American structures and institutions militates in favor of reparations, both to address the wounds of enslavement and to dismantle systemic racism. But we need not determine the full reach of a reparations project to agree that the families of victims of lynching and racial murder, whose cases are the subject of By Hands Now Known, constitute a distinct and distinctly deserving subset of victims. Their claims for reparation should be promptly addressed, particularly because the generation most affected by these crimes is aging.”

Documenting the historical truth behind these claims and bringing them to light is a critical step in the process. In By Hands Now Known, Margaret A. Burnham has taken that step. It’s up to her readers to take the next one.