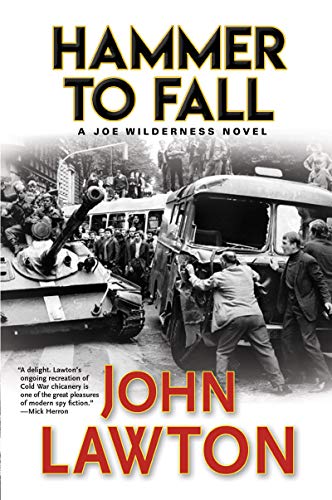 “The final scenes lead dramatically to a high-tension Cold War quandary that promises more to come in this entertaining series.”

John Lawton’s British detective fiction has reached the height of being predictably stirring, powerfully written, and cleverly knit together in terms of both plot and the painful personal wounds of World War II. Number eight in his Inspector Troy series won high acclaim and appreciation.

Now his second series, featuring MI6 spy Joe Wilderness, digs into London life (and murder) in the 1960s. Hammer to Fall is the third to feature Wilderness, whose previous lives as a cat burglar and then a coffee smuggler in divided Berlin give him skills the espionage agency is glad to take advantage of. As Joe himself describes his position, “He still told lies, but now he lied for England. And of course he lied to England.”

But now, having lost or misplaced a Soviet agent from a Berlin handover, Joe gets a brief visit home to his wife and kids, then a “punishment” assignment to terrain where it’s assumed he can’t or won’t get into diplomatic trouble again: remote northern Finland, trapped in Arctic weather and half-year darkness. What Joe’s superiors neglected to consider, though, is that Finland shares a border with the Soviet Union, and both smuggling and the presence of spies quickly re-enter his life. What, you thought he’d be happy just showing British comedy films from a generator-powered projector in frozen villages? Not Joe.

To his astonishment, a Soviet officer pops across the border to make a cash offer to him, presumably for some of the vodka he’s now smuggling. It’s the Russian Joe knew in the past as Kostya, and when he reports the contact to his local espionage ally, nothing makes much sense:

“Pastorius pulled a face. Wilderness knew why and spoke for both of them.

“’It doesn’t ring true, does it? American dollars? Sounds like a seduction. Visiting in person when he could run all this from Russia, and if not from Russia then from some spot only metres from his hole in the fence? He may well want the vodka, but it’s handy cover for what he’s really after.’”

While Joe works out the real goal of Kostya’s Finland visits, he opens up a crisis with major wartime and destructive implications. Meanwhile, Lawton layers in scenes from Vienna, where a former and significant flame of Joe’s is also working along the frayed edges of diplomacy and espionage: Nell, whose loyalty is now to a German leader on the rise, Willy Brandt. The passages don’t always work well in parallel—too often, Lawton allows disconcerting lurches of motive and suspense as he skips from one locale and persona to the other—but when the action becomes intense, the powerful attraction between Joe Wilderness and the love of his past raises everyone’s risk levels, and promises both crime and murder in the run-up to the Cold War’s “Prague Spring.”

As a crime novel or work of espionage, Hammer to Fall isn’t a simple read. It demands some historical grasp of the reader, and patience with the curling plot. But there are intermittent sweeteners of humor and affection, and the final scenes lead dramatically to a high-tension Cold War quandary that promises more to come in this entertaining series.