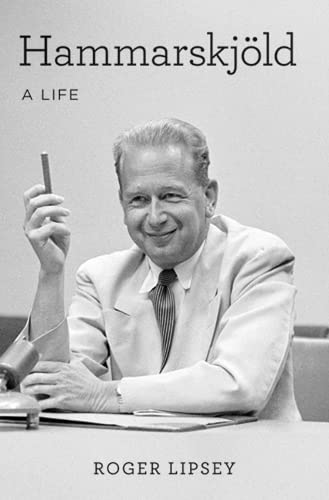 Dag Hammarskjöld served from 1953 to 1961 as Secretary General of the United Nations. He is forgotten by many today, but as Roger Lipsey points out in his magisterial Hammarskjöld: A Life, this forgetting is a great loss to those of us who might benefit from Hammarskjöld’s twofold legacy.

On the one hand, as the second person to serve as Secretary General, he was a peacemaker in a turbulent era fraught with risks of violence between nations.

On the other hand, he was a profound individual, a man whose inner searching brought him to the highest levels of conscience and made him willing to subordinate himself to what he perceived as greater—the need for peace in the world and the God that he discovered within.

The United Nations had only been created in 1945 as the terrible suffering of a second world war in four decades drew to a close. By its charter, the United Nations sought to promote peaceful international relations among member nations, affirm fundamental human rights, promote social progress and standards of freedom, and establish conditions in which the justice flowing from treaties and other sources of international law could be upheld.

These idealistic goals, similar to the goals of the failed League of Nations, became all the more important in view of the creation of the most terrifying weapons ever known—the atomic and hydrogen bombs—and the Cold War pitting the United States and the Soviet Union against one another in innumerable arenas.

Into this crucible came Hammarskjöld. His father had been prime minister of Sweden during the Great War. The son, an economist by training, became a rising light in the government of Sweden. His name came forward late in the process of choosing the Secretary General.

Nothing about him offended the major powers or suggested that he would focus on political, as opposed to administrative, matters. When offered the position, his replying cable evidenced his characteristic humility, “With strong feeling personal insufficiency I hesitate to accept candidature but I do not feel that I could refuse the task imposed on me . . . ”

Once in office, the challenges to peace came without cessation. The Korean war was already winding down and, soon after Hammarskjöld took office, an armistice was signed on July 27, 1953. Hammarskjöld spoke in a UN Radio address of giving up “the unconditional surrenders of old wars” and acceptance of “a peace without vengeance.”

The Suez Crisis in the fall of 1956 saw hostilities between Israel and Egypt followed by a joint British and French effort to seize control of the Suez Canal from Egypt. Since Britain and France were permanent members of the United Nations Security Council, the situation called for extraordinary diplomatic skills that Hammarskjöld showed himself to possess.

One aspect of rolling back the aggression was historic: a peacekeeping force called the UN Emergency Force (or “UNEF”) was voted into existence by the General Assembly without a negative vote being cast. Drawn from the member nations, UNEF soldiers wore blue helmets to distinguish themselves from combatants.

As the enemies disengaged along the Suez Canal, UNEF created a buffer to help ensure that peace would be viable. The remarkable success of UNEF as a concept is shown by the fact that in June, 2011, “115 member nations were contributing some one hundred thousand soldiers, police, and military experts to worldwide peacekeeping initiatives.”

On June 30, 1960, the Congo joined the many colonial territories in Africa that became independent nations. Ruled by Belgium after having effectively been a fiefdom of Belgian’s King Leopold, the Belgians had done nothing to prepare the Congolese for independence. The result was a chaos caused by a lack of responsible leaders, European and great power meddling, and the secession of the mineral rich states of Katanga and South Kasai.

As Hammarskjöld sought a path through this complicated and at times violent crisis, the Soviet Union continued an ever more hostile campaign against him in the chambers of the United Nations. He bore this difficult pressure well and, despite setbacks, moved the Congo in the direction of peace.

It was in service to this process of peace that Hammarskjöld, on September 17, 1961, embarked on a flight from Leopoldville to Ndola in what was then Rhodesia. The airplane crashed under mysterious circumstances that the book explores intelligently and at length. Whether the cause was pilot error or an attack by another aircraft (questions to which answers are still being actively sought), Hammarskjöld was no more.

It would be a grave failure to leave Hammarskjöld’s life at this. Yes, his peacekeeping efforts were remarkable and deserving of praise. But also remarkable was his largely hidden spiritual life, the process of making the inner man. This became clear after his death when his selections from his private journals—titled Markings—were published to wide acclaim.

Hammarskjöld was deeply influenced by medieval Christian mystics such as Meister Eckhart, Jan van Ruysbroeck, and Thomas à Kempis. Particularly, The Imitation of Christ by Thomas offered a model that Hammarskjöld embraced with the deepest humility. Markings reflected both the richness and loneliness that he often experienced: “I realized . . . that the only elevation possible to man lies in the depths of humiliation. After that, the word ‘courage’ lost its meaning, since nothing could be taken from me.” He goes on to say that in the model of the unique experience of Christ, he learned the meaning for himself of “the prayer that the cup might pass from him and his promise to drink it.”

Much more could be said, but the success of Hammarskjöld: A Life is that it offers enough of Hammarskjöld that his death brings a grief both palpable and intense.

Through its deep mining of an unusual man’s inner and outer passages, Hammarskjöld: A Life offers a detailed view of the way in which Hammarskjöld moved—and through this book moves us all—toward his “fuller understanding.”