The Hall of the Singing Caryatids 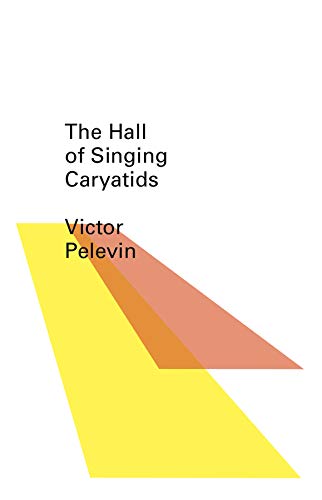 “At barely more than 100 small (four and a half by seven inch) pages in Andrew Bromfield’s excellent English translation The Hall of the Singing Caryatids succeeds both as a novella of ideas and as a science fiction work of fantasy, and is recommended to all readers enamored of thought provoking fiction.”

Russian writer Victor Pelevin’s latest work of fiction to appear in English is a feminist literary science fiction fable that employs the setting of a secret Moscow underground brothel/gentleman’s club—whose entrance is located on a heavily guarded military base—to sardonically examine the role of feminine beauty amid widening income disparities in post-Soviet Russia. As a high-ranking official explains to its employees prior to its opening, the club’s success is a matter of national security:

“. . . in the course of a predatory and criminal process of privatization, the wealth of our country fell into the hands of a bunch of oligarchs specially selected by agents operating in the dark wings of the international stage, on the basis of their spiritual squalor. Not that they're irredeemably bad people, no, you shouldn't think that, papa mama nuthouse eighteen. They are more like little children, incapable of striving for any goal except satisfaction of their constantly shifting desires. Hence all those soccer clubs, giant yachts, 20,000-Euro bottles of wine and other ghastly aberrations, about which I think you have already heard more than enough . . .

“. . . we must create conditions under which these infantile knuckleheads can no longer disgrace our country abroad. We must, so to speak, recreate here, on our side of the border, the stupefying mirage that attracts them to the West. Thus we shall ensure the security of the Fatherland’s strategic reserves and at the same time retain, here in Russia, the immense financial resources that the oligarchs waste on their perverse pastimes. This, we can say, is one of today’s absolutely top-priority national projects—although, for obvious reasons, you won’t hear a single word about it on TV.”

The book’s third-person narration is told from the point of view of Lena, a young woman who, in the book’s opening pages, passes her audition for the job by singing while standing naked on a desk with one leg raised. Lena “had long ago accustomed herself to the idea that on the path to success she would have to undress in front of strangers.”

The job in question is to be one of a dozen Singing Caryatids of the Malachite Hall. In architecture a caryatid is a statue of a woman that is used to support a roof or beam.

The club’s Singing Caryatids are women who wear nothing but green marble-looking paste, wigs, and wings, and emulate statues by standing perfectly still with their hands above their heads touching a marble slab while purring one of two tunes--the theme from Swan Lake and the song Mondo Bongo--until one of them is spoken to by a customer, at which time she goes with him, engages him in conversation, and should he express such an interest, perform whatever sexual favors he desires.

In order to stay motionless, the Caryatids are injected with Mantis-B serum, which is derived from the substance that enables praying mantises to remain motionless for hours. The serum is injected into the back of the head, and while administering the serum the security service officer jokingly compares the women to the Polish officers whom the Red Army murdered at the Katyn forest in 1940. The dozen women are divided into three crews of four who work for two days straight and have the next four days off.

“In all, there were twelve girls in the small conference room—they were all beautiful, but different, as if they had been specially selected for contrasting types of physical appeal that would reinforce the overall impact. There were two black girls, one mulatto, two dusky girls from Central Asia, two with narrow slanting eyes (Asya was more beautiful than the other one), and five generally European-looking girls: three blondes (Lena included herself), one brunette, and one with chestnut hair.”

“The most important thing you must realize is that, despite the apparent—ambivalence, let us say—of your work, it is every bit as important as a tour of duty in a nuclear submarine that forms part of our nation’s defensive shield. Perhaps even more important, because today’s war is not the war of fifty years ago, and is fought with quite different means. The country needs a new kind of defensive shield, one that protects our frontiers from within, and you girls will be the ones to bear it!”

Each Caryatid crew is driven to and from the club in a limousine-style minivan, and during the ride they discuss the nature of their work:

“Lena frowned.
“‘We’re not prostitutes,’ she said. ‘We’re more like geishas, really. We sing. We recite.’

“’Oh yeah, not just a plain glory hole,’ said Asya. ‘There’s a pair of earphones and a soundtrack as well. So the price is different. …I don’t get you girls; I don’t see why we should have any complexes about the job. Because everyone’s a prostitute nowadays, even the air—for letting the radio waves pass through it.’”

The Caryatids and other USAs’ supervisor is a short rotund middle aged man named Uncle Pete who wears black t-shirts with parodies of Western designer logos, such as the Nike swoosh with the words “Just Did It” and

During breaks the employees can relax and eat in a cafeteria on whose walls are written sayings by Dostoevsky, Larry Flint, and Kate Moss; motivational slogans such as,

“THE SUPREME SIGNIFICANCE OF RUSSIAN LIFE IS
THE CALM, PATIENT GILDING
OF A BOUNDLESS ICONOSTASIS;”

and clippings from the Russian press, including this paragraph to which Lena took particular offense:

“The fundamental quality that a modern Moscow girl cultivates by the age of twenty is the naïve readiness for elite hyperconsumption (in today’s Russian this is known as ‘pussyness’). Any fool knows that no one is going to let these legions of pussycats anywhere near a glamorous sugar daddy, he’ll simply mess with their heads and then dump them. Basically, that’s the way it’s always been, throughout history. But today the means you have to use to mess with a girl’s head are so crass that the reward awaiting you for this dirty, heavy work pales into insignificance. Especially since these efforts not only offend the moral feelings of a decent, Christian human being, but are also extremely expensive—and the true market price of the anticipated reward is significantly less than the bill for the first dinner in a good restaurant. And discussing the possibility of spiritual affinity with one of these Prada-wearing amoebas would simply be a waste of time . . .”

On their commutes to and from the club the mini-van provides magazines with patriotic motivational propaganda:

“Practically all the information that Lena came across was imbued with self-assured pride in the country’s success. Everything was permeated with it now—even the weather forecast and the blurbs on books—and that made the world outside her window a little more comfortable.”

Mr. Pelevin provides an example of such a book blurb:

“In his autobiographical dilogy Black Earth and Downfall into Brooklyn, the Moscow correspondent of TIME magazine, Andrew Shmaier, investigates the cultural and psychological shift taking place in the Russian consciousness, as a result of which a poorly paid western journalist (in former times the object of girls’ dreams and an almighty figure with the attributes of a deity) loses his attractiveness as a potential sexual partner and, in the eyes of the compradorist Moscow elite, is transformed into a banal cocktail reception parasite, who is dreary and depressing to talk to and absolutely good for nothing.”

To further motivate the employees after the club experiences some initial mishaps—a female USA working in the Billiards Room loses her eye to a hostile customer’s pool cue and one of her colleagues meets a violent death whose cause is a matter of controversy (management declares she was a secret Muslim convert and suicide bomber, but her co-workers insist she was murdered)—further motivation is provided in the form of an ideologist who addresses the staff.

The ideologist appears to be a contemporary version of the political commissars of the Soviet era who were assigned to every army unit and factory floor except that the new ideologist’s ideology is a mixture of laissez faire capitalism and anti-Western paranoia. He concludes his initial remarks,

“There is an undeclared war going on, and every time we feel in our hearts a pang of apparently just resentment at the excesses of our wealthy Russian knuckleheads, the oligarchs in London rub their sweaty hands together and laugh. . . .”

But none of these motivational efforts counterbalance Lena’s growing disappointment with human reality compared to her drug induced insect consciousness. On the job the Mantis-B serum not only enables Lena to hold a pose for hours at a time but also fills her with a sense of bliss as she perceives herself as a praying mantis and hallucinates that she sees another giant five eyed praying mantis (with an eye on each of its sides and three on its forehead in the form of video screens on which animated movies play) in front of her with whom she has silent mental conversations.

“The mantis . . . removed the barrier separating its consciousness from Lena’s, and something absolutely incredible flooded her.

“It could be described approximately as follows: whereas the last time Lena thought that the world around her had turned into a Windows Media Player, now she herself became the visualizer, and the world disintegrated into a host of discrete aspects that taken separately seemed absurd, astounding, impossible, and terrifying, but together somehow balanced each other out in a calm and happy equilibrium that settled into her head.”

On each shift Lena’s hallucinations grow stronger. She imagines she has a second pair of legs. The Malachite Hall is the last of the club’s rooms to receive customers, and when Botvinik, one of the country’s wealthiest oligarchs, makes a reservation he specifically requests Lena. To steel herself on the day of the visit Lena requests a double dose of Mantis-B, which intensifies her hallucinations. Anyone familiar with the mating habits of praying mantises can predict how this will end.

The Hall of the Singing Caryatids was originally published in Russia in a collection of Mr. Pelevin’s short stories, but Russian is a more concise language than English (for example, it has no articles). At barely more than 100 small (four and a half by seven inch) pages in Andrew Bromfield’s excellent English translation The Hall of the Singing Caryatids succeeds both as a novella of ideas and as a science fiction work of fantasy, and is recommended to all readers enamored of thought provoking fiction.