The Half Sister: A Novel 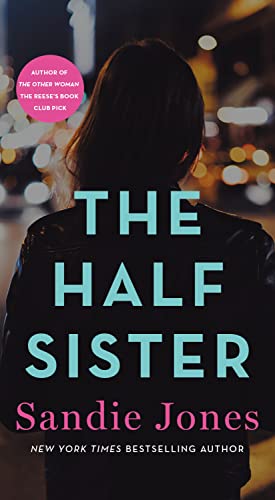 “Jones moves the story along at an intriguing, fast pace, making for an entertaining, fun read. Recommended for all who enjoy twisty thrillers and clever, smooth writing.”

It has been almost a year since Kate and Lauren’s father Harry died. Since then, they try to keep up their weekly dinners with their mother, Rose, but each week becomes more contentious as they envy each others’ lives. Kate, on round three of IVF with her husband, Matt, wishes for the children Lauren has no trouble conceiving, although she doesn’t at all feel jealous of Lauren’s controlling, selfish husband. Lauren, on the other hand, sees Kate’s life as one of agency and fun, with Kate’s travels for her journalism job and her ability to move about as she wishes without interference from Matt. The families are suffering through yet another uncomfortable dinner when the doorbell rings. A young woman named Jess asks if Harry is home.

“‘And what do you want with Harry?’ asks Rose shakily.

Jess eyes her warily. ‘I need to talk to him. It’s really important.’

Kate looks to Rose. ‘I’ll let him know you came by,’ she says, as her mother’s and sister’s heads turn in her direction. ‘What should I say it’s about?’ she goes on, ignoring their perplexed stares.

The woman looks down at the floor again, as if summoning the courage she needs to say what she’s about to say.

The sisters react differently, and Jess is sent away. Kate, having already held back the information that Harry is dead, sees no reason to entertain Jess’s declaration, and says they should just ignore her and forget she even came by the house. Rose agrees. Lauren, feeling the distance between herself and Kate, is more open to the idea of another sister, someone who could be family.

Behind the others’ backs, Lauren seeks out Jess, allowing her into her family’s life in secret, listening to Jess’s stories of her experiences in foster care and, more recently, college. Kate, not believing Jess’s accusations, decides to use her training as a journalist to investigate Jess’s past. She has to prove the young woman is lying.

‘Well, then you’re going to need to find out exactly what grounds that theory is based on,’ says Matt. ‘Because DNA doesn’t lie.’

‘Okay,’ says Matt. ‘But if you’re going to dig around, be careful.’

‘You might discover something you don’t want to find.’”

Kate and Lauren approach the problem differently, and each finds herself examining not only Jess, but her own marriage, career, and personal demons. What does it mean if their father had an affair? Is he still the man they remember? Does their mother’s resistance to finding the truth mean she believes Jess, or sees no reason to even consider Jess could be telling the truth? Will the appearance of a third daughter destroy the fragile bond they hold onto with each other, or make them stronger? Who exactly is Jess, and where did she come from?

Sandie Jones weaves an intriguing story together with alternating chapters from the two sisters’ viewpoints. We see into their lives and thoughts in a way that allows us to identify with each, highlighting not only their personal issues but also the mystery of Jess from opposite points of view. Jones moves the story along at an intriguing, fast pace, making for an entertaining, fun read. Recommended for all who enjoy twisty thrillers and clever, smooth writing.