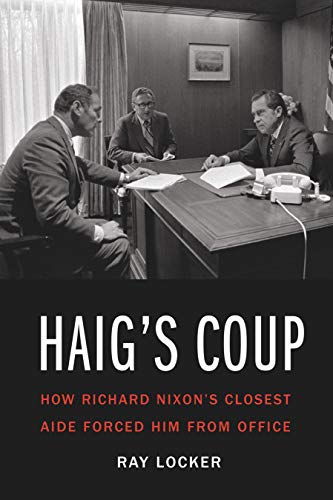 “Haig’s Coup will also appeal to a broader audience, painting a picture that is tantamount to a wreck on the freeway from which we cannot avert our eyes. It is Watergate Political Conspiracy Theory 101.”

Just when you thought you had heard it all about the Watergate scandal, someone comes along with a new premise that dredges up everything you thought you knew and forces you to look at things through a new lens. That’s exactly what Ray Locker has done with his intriguing new work, Haig’s Coup: How Richard Nixon’s Closest Aide Forced Him from Office.

According to Locker, General Alexander Haig, acting as Nixon’s chief of staff, orchestrated leaks and other strategic disbursals of information to trap Nixon into a corner from which his only escape was resignation from office. Haig’s motive? Not the best interests of the country, as one might expect from a military man like the good general. Rather, it was to cover up his own secret involvement in a spy ring overseen by Defense Secretary Melvin Laird that pilfered secrets from the White House for the benefit of the Pentagon.

Haig’s Coup proposes that, upon assuming the role of chief of staff from his predecessor, the disgraced Bob Haldeman, Haig “very quickly realized the president was guilty and most likely not going to finish his second term in office.” He then consolidated power in the White House, influenced Nixon’s choice of adjutants, as well as his personal lawyer, and then “closed off access to the president.”

Operating from the inside, Haig controlled the flow of information, both to the Oval Office and from the Oval Office, sometimes surreptitiously, such as leaking the fact that the Oval Office had a taping system, and sometimes openly, such as when he met regularly with Watergate Special Prosecutor Leon Jaworski, who had replaced Archibald Cox during the infamous “Saturday Night Massacre.” In fact, Locker contends that Haig, in effect, manipulated Nixon into those events that dealt a death blow to his presidency.

“Haig not only pushed Nixon into the crisis but also consistently lied to Nixon and [Attorney General Elliott] Richardson, telling the president that the attorney general agreed to fire Cox when he clearly had no intention of doing so. Haig’s machinations had succeeded in getting rid of a nemesis, Cox, but had the collateral effect of further weakening the president he was meant to protect.”

The Saturday Night Massacre was perhaps Haig’s crowning achievement, the culmination of a master plan that started almost from the day he accepted the position as Nixon’s chief of staff. He calculated each release of information to cover up his involvement in the spy ring and to create scapegoats, while at the same time maneuvering Nixon toward the inevitable resignation.

As Nixon became increasingly mired in scandals—not only Watergate but the mess created by his vice president Spiro Agnew, who was dealing with bribery charges from his gubernatorial days in Maryland—and beset by personal demons, drinking heavily, and teetering on the brink of a mental breakdown, Haig “fed Nixon’s paranoia” and became the de facto president. Locker reports that on one occasion, upon first hearing of a conversation Nixon had with Senate Majority Leader Mike Mansfield, Haig stated, “I run this White House and don’t you ever forget it.”

On some occasions, Locker takes leaps of faith toward his conclusions, although they are arguably based in fact. For example, he reports that, notwithstanding today’s conventional wisdom that former FBI associate director Mark Felt was “Deep Throat” to the Washington Post’s Bob Woodward, much of Woodward’s information could not possibly have come from Felt. Instead, often it “bore the unmistakable fingerprints of Alexander Haig.” While he states that “it is not a great leap” to believe that Haig was using Woodward as a conduit,” that acknowledges that it was, nevertheless, a leap.

According to Locker, Woodward protected his source, Haig, whom he had first met several years earlier when Woodward, at the time a navy lieutenant, worked in the Pentagon communications office, although both men would later deny knowing each other.

At one point, Woodward even sat on a scoop about the military spy ring for months even though publishing it “would have exploded the White House.” If that had happened, “then Haig’s role in the spy ring would have been revealed, a betrayal that would have forced him out of the White House, ended his career, and perhaps led to prison. Woodward put keeping Haig’s secret ahead of informing his readers.”

“No one did more to force Nixon from office than Haig. Haig’s coup, however, was not made for policy reasons but for self-preservation,” Locker says. Ultimately, Haig protected his secret long enough for the threat of exposure to lapse by virtue of Nixon’s departure from the White House, which he, himself, orchestrated for the purpose of protecting that secret. And that puts a new slant on the whole affair.

For students of politics, history, and political history, this book is a valuable addition to their libraries. Haig’s Coup will also appeal to a broader audience, painting a picture that is tantamount to a wreck on the freeway from which we cannot avert our eyes. It is Watergate Political Conspiracy Theory 101.