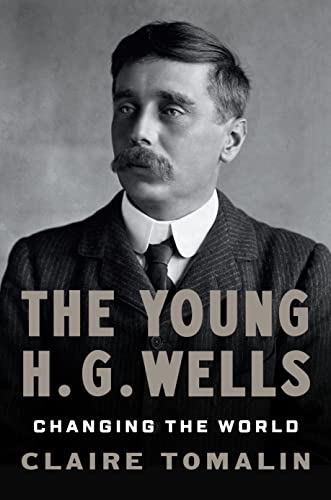 “A thoughtful and admiring account of a young British man’s rise from lackluster roots to world fame as a science fiction writer.”

In 1895, when the first installment of H. G. Wells’ The Time Machine appeared in Britain’s New Review magazine, its editor told Wells the story was “so full of invention . . . that it must certainly make you a reputation.” For Wells (1866–1946), then 29, sickly and impoverished, yearning for literary success, the work did indeed mark a stirring debut in print. He soon began writing War of the Worlds—a story suggested by his brother Frank—and began his ascent as an iconic science fiction author.

In her quiet but assured The Young H. G. Wells, which covers the author’s first four decades, Tomalin, a noted biographer (Charles Dickens, Samuel Pepys) and former literary editor of The New Statesman, makes clear how young “Bertie,” the fourth child of Joseph Wells, a gardener, cricketeer, and failed shop keeper, and Sarah Neal, a former maid, struggled to find his way from humble beginnings.

Facing financial difficulties, the family placed their children in apprenticeships. For Wells that meant spending several miserable years folding clothes in Hyde’s Drapery Emporium and other shops. The work was “wretched,” and he hated it. He fled his nascent career in dry goods for teaching posts in boarding schools.

Several events pushed him toward a life of the mind. Awarded a year of study with the celebrated scientist Thomas H. Huxley, friend of Darwin, Wells found himself immersed in an anatomy lab with unusually bright students. He also discovered and read a trove of classic works by Plato, Voltaire, Swift, and others in the library at Uppark, a country house in Sussex, where his mother took a job as a lady’s maid.

From early on, Wells was ambitious, “taking on too much,” from writing to debating to conversation, sometimes writing (between reviews and novels) 7,000 words a day, writes Tomalin. He had vowed to “succeed and sell” his fiction. By the age of 30 he was being compared to Swift and Defoe.

Despite his frantic pace and recurring lung illnesses, he was having fun. In War of the Worlds, he relished placing the arrival on Earth of invading Martians near his home in the London suburb of Woking. He set out to “completely wreck and destroy Woking, killing my neighbors in painful and eccentric ways—then proceed via Kingston and Richmond to London, which I sack, selecting South Kensington for feats of peculiar atrocity.”

Tomalin notes neither The Time Machine nor War of the Worlds has ever gone out of print. Both have attracted “ever more admiration as the years have gone by—and several screen versions, none of which get near Wells’s narrative skill.”

A “sense of entitlement” led Wells to deal ruthlessly with agents and publishers and may even have encouraged his serial philandering following an unsatisfying wedding night with his first wife, a cousin. His “extraordinary” literary production occurred at all hours. “Ideas came into his head, some to be quickly made into short stories, others to develop slowly, worked, reworked, changed, abandoned, redrafted. Keeping track of his writing is difficult, and it is sometimes quite hard to believe he could possibly be working on so many different projects at once,” says Tomalin.

Projects ranged from novels (The Invisible Man and The Island of Doctor Moreau), to histories, to casual essays, to political tracts. A socialist bent on fixing the world, he was always worried about money.

Wells often thought of himself as an “elderly invalid,” yet he managed to make a two-month trip to the United States, where he encountered another socialist writer, Maxim Gorky, visiting from Russia. In England he cultivated friendships with writers including Stephen Crane and George Gissing (New Grub Street). His visitors included Henry James, Joseph Conrad, and others.

Tomalin faults Wells as “unreliable, selfish, and even vengeful.” But despite her original intention to focus only on his early years, she continues into his forties. He was “too interesting to leave: ambitious, generous, hardworking, and astonishingly energetic and original in his thinking.”

A thoughtful and admiring account of a young British man’s rise from lackluster roots to world fame as a science fiction writer.