Guts: The Endless Follies and Tiny Triumphs of a Giant Disaster 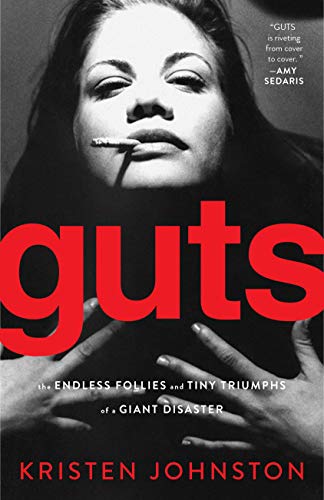 “. . . never before has anyone, to this reader’s knowledge, made such a harrowing a story as downright funny as this. . . . Those who know Kristen Johnston, most especially from her many wonderful performances on the New York stage, already know what others can now discover from reading Guts: that she is someone special and that what she has to say in that husky, cynical author’s voice of hers is well worth noting, reading, and celebrating.

Also worth celebrating is the fact of her survival, which is no small thing.

The world would be less without her.”

“It felt like I was speeding on the Autobahn toward hell, trapped inside a DeLorean with no brakes. And even if I could somehow stop, I’d still be screwed, because there’s no way I’d ever be able to figure out how to open those insane, cocaine-designed doors.

“It was indescribably awful. I felt no hope, no joy, no nothing.

“Only a powerful and all-consuming hatred for my own guts.

“Which is especially fascinating when you take into consideration that my own guts hated me right back, a fact I became aware of only when they blew themselves up in a brutal and shocking act of revenge.”

So begins actress Kristen Johnston’s retelling of the story of her own addiction to alcohol and drugs, of her near brush with death as a result, and of her ultimate recovery in her new memoir, aptly called Guts.

Seldom has an author, most especially a show business personality, had the courage to speak with such candor on the subject of addiction. (She reveals, among other things, that, during her addictions, she stole pain medication from her mother after the mother’s hip replacement surgery, as well as from her own dog, before adding, “Thank God they weren’t beef flavored, because that would have been really embarrassing.”) And never before has anyone, to this reader’s knowledge, made such a harrowing a story as downright funny as this.

Those who remember Ms. Johnston from her work on “Third Rock from the Sun,” are already aware of her off kilter comic timing and her jaundiced tonality. But those reading Guts soon meet a very different Kristen Johnston:

“Coming from a deeply private family, I now know that somewhere along the line I had lost the very important distinction between privacy and secrecy. And since both brought me nothing but confusion, anxiety, and misery, I’ve decided to try something new. I’m giving up on trying to control your mind.

“Last year when someone suggested I write a book, I pooh-poohed it at first. But then I started to warm up to the idea. After all, any bonehead can write a book these days. Who’s to say mine would suck any worse? Besides, when I took a gander at the overflowing ‘drunken celebrity memoirs’ section, I got the feeling there just might be room for one more poorly written, terribly reviewed, slightly funny, and occasionally moving look at recovery and redemption through the eyes of a giant-Freak-ex-alien-recovering-addict-cellulite-ridden-has-been-actress.”

While the author seems to be immunizing herself against (a) her book disappearing amongst this year’s ever-increasing supply of celebrity memoirs and (b) being hated by the media and readership alike, the book is funny, moving, harrowing and an easy, breezy read (large print helps), and despite her fears is getting a really great review here.

While the book starts out a bit slowly (an insecure child, a misfit, partly because she grows to six feet tall while still a young teen, goes to New York to find success, gets success in Hollywood on a hit TV show, only to find that she is ill-equipped to deal with celebrity), once what happens happens (the book is called Guts for more than one reason), there is no turning back, and no setting the book down even for a moment until you read how it all comes out (even if the fact that Ms. Johnston obviously survived to write it gives you a rather large clue).

But what is it that happened? Well, as the author begins her tale:

“My life changed forever in London on December 4, 2006, when I was thirty-nine years old.”

That quote appears on page 83 of the book. It might have been more powerful to begin the book with it, instead of “Thank you ever so much for buying my book,” but who’s to say who is right or wrong about these things.

“Opening night, and we were a smash hit. The place was packed, and the reviews were glowing. We stayed up into the wee hours getting trashed and celebrating out awesomeness.

“The next night, my intestines ripped open.

“I swear. I was at my flat, after the second night’s performance, sitting on the loo, when I remember feeling a terrifying rip in my stomach area, and I’m convinced I actually heard a horrible ripping sound. This rip was immediately followed by a hurt so powerful, so all-consuming, that, to escape its clutches, I did what any sane person would do and passed out. I had, of course, been endlessly peeing right before said moment, and I barely had time for this quite heroic and even Schultz-like thought before I plowed headfirst into the white tile: Uh-oh, I must’ve really pulled a stomach muscle or someth—”

To get the reason behind the reference to Sargent Schultz and “Hogan’s Heroes,” you’ll have to read the book.

But there are better reasons of reading Guts, and plenty of them.

There is, for example, the story that Ms. Johnston relates about watching the movie Papillon on New Year’s Eve in her London hospital bed and the literal fireworks that accompanied it, or the tremendously moving anecdote that she relates about her experience being helped with as simple a thing as a bath in the aftermath of her surgery.

Better still perhaps is the way in which she deals simply and honestly (and with sense of humor intact) about the challenges of sobriety after years of addiction. Best of all perhaps are the simple words of earned wisdom that she has to offer others who finally agree to enter rehab, as she finally did, after her near fatal attack of acute peritonitis and her months of recovery:

“Shut the fuck up and listen for once in your life.”

As advice goes, either seems fine.

Those who know Kristen Johnston, most especially from her many wonderful performances on the New York stage, already know what others can now discover from reading Guts: that she is someone special and that what she has to say in that husky, cynical author’s voice of hers is well worth noting, reading, and celebrating.

Also worth celebrating is the fact of her survival, which is no small thing.

The world would be less without her.