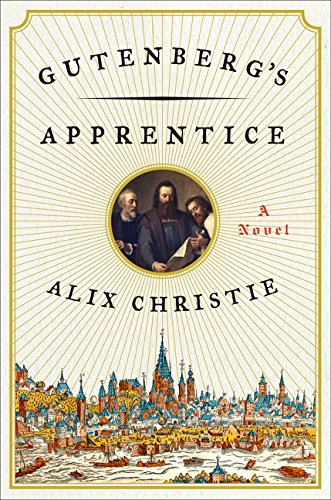 “This ambitious but beautifully executed historical novel captures the life and times of half a millennium ago, and with the above parallels, draws us closer to today’s publishing revolution.”

Author Alix Christie takes the reader on a four-year journey in her debut novel, Gutenberg’s Apprentice. Long thought to be the sole achievement of Johann Gutenberg, the history-changing achievement of inventing moveable type was actually the work of three collaborators: Gutenberg himself; apprentice Peter Schoeffer; and Shoeffer’s foster father, Johann Fust, who financed the project.

Fust called Peter back from his work as a copyist to embed him in Gutenberg’s workshop. The very gifts that Peter thought he was giving up were the ones that proved to be the tipping point in the success of this project. Fust needed backup at close hand to manage the mercurial Gutenberg.

The years span 1450–1454, a time of great unrest in the printing industry. Apprentices carved wooden pages out of a single block of wood. Furthermore, as the face of literacy changed, the church lost control over public knowledge and as result, contemporary thought. (We see this same phenomenon in France, leading to the revolution and among the followers of Martin Luther as he nailed his Ninety-Five Theses to the church door for all to read in Germany)

Told in a style of retrospective dialogue taking place many years later, Peter and Abbot Trithemius, of Sponheim Abbey in Germany, review the entire situation from 1450 to 1454.

Ms. Christie provides painstaking detail about the development of these presses and the techniques necessary to create models for each letter and then gather them into a matrix to complete a page.

Yet not everyone was enamored by this technique. Many feared it as an act of deviltry. The widespread adoption would put the sacred word of God, now reverently copied by monks, into mechanized and secular hands. Even Peter Schoeffer himself was against the practice, until he experienced his own epiphany:

“The chunks of metal with a letter on their tip were no prettier than they had been before, but for the first time Peter understood—in the plain act of molding and of making—that what they did was utterly astonishing. . . . He screwed his eyes in concentration, hearing nothing, seeing nothing but the motion of his hands. He shut the box and tipped the ladle—and in so doing, tipped and emptied out the roiling in his soul.”

There was unrest in the church as bishops competed for power selling indulgences and other ecclesiastical merchandise. But this was only the beginning. The bishop of Mainz was evasive and chose not to use Gutenberg for his work of printing indulgences and other items of “commerce” in that time period. It was only then that Peter and Gutenberg settled on the Bible as their project to demonstrate moveable type, which did not require the sanction of the bishop as the bible belonged to everyone.

The author captures the agonizingly slow passage of time to completion of the work with financial setbacks, raids, destruction, betrayals, and endless resetting of vellum pages—at great expense. Only the workers in Gutenberg’s workshop knew what was really happening.

Allegiances, even among the three key players shifted; a shroud of secrecy weighed heavily on everyone. The wolf was constantly at the door. The Guilds, silenced initially by generous dues paid, soon grew tired of the unknown and began to require more specifics—and guilders. The actual work was covered up by making trinkets and mirrors for pilgrims. All work was sequestered each night as the exacting progress dragged on. A complete version of the Bible would number greater than 1,200 pages.

The tension never lets up, and Ms. Christie includes enough human interest detail to create a lifelike picture of Mainz during this time. This includes the Pope’s emissaries threatening a crusade after the fall of Constantinople, which would have drained off every able-bodied male in Mainz, (including the men in the print workshop).

The goal of completion eluded them constantly. Still, with the end in sight, they set out for Frankfurt in 1454.  Suffice it to say that a hard won victory came with its own massive price. Neither closure nor settlement was complete for any of the three key players—a lesson.

In separate remarks, Ms. Christie likens the print revolution of 500 years ago to the e-book and publishing revolution of today.  (Gutenberg to Zuckerberg!) Both changed publishing forever. In the early instance, much of what remained about books stayed the same for more than 50 years.

Ten years into the e-book revolution “a radically different reading experience has yet to appear.” Today’s e-books essentially replicate the form that came before. “Whatever comes next must fundamentally alter how we experience written knowledge. It could be 50 years—as it was with the printing press—to fully realize the impact.”

This ambitious but beautifully executed historical novel captures the life and times of half a millennium ago, and with the above parallels, draws us closer to today’s publishing revolution. What the future will bring to the experience of reading has yet to appear. Ms. Christie sets the stage. The reader awaits.