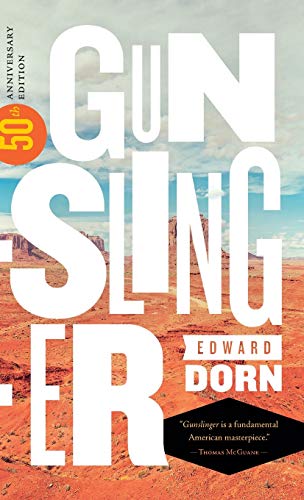 “an essential piece of American literature, already, and the further we descend into an age of circuses without bread, the more poignant will be our Slinger’s aim on the true heart of the West.”

Edward Dorn was an American writer. His biographies tell of a lanky, young ruffian coming of age in a one-room schoolhouse in Illinois, as though we were reading of a romanticized Abe Lincoln transposed on the Depression-era Midwest.

First, he knew poverty, and then came to know labor in his adopted home of Washington State. He wrote By the Sound, an autobiographical novel of working-class life in the Pacific Northwest, in the late ’50s, and thereby swung his trajectory toward the academic, taking a teaching position at Idaho State University in 1961. This was also the year of his first poetry publication, in the form of a manuscript entitled Wild Dog.

Dorn would go on to teach writing at the University of Essex, the University of Colorado at Boulder, and the Paul Valery University in Montpelier. His travels in England and France made his story multifarious in marriages and creative overlaps with prominent writers of the era.

He published widely, established himself as a long-faced Lothario of the literary world, and even served as inspiration to the post-human art-rockers known as DEVO. But, by a long shot, his most celebrated ram down the canon is the novel-length narrative poem, Gunslinger.

As told by a narrator named “I,” Gunslinger takes us on a semi-psychedelic tour of the West. It’s not a literal, geographical West (though it sometimes is) but a composite of American iconography, from simple road signs to cartoons to events that appear place-fixed, but time-aberrant.

We travel with a posse, of course, including Madame Lil (a stand-in for the worker?); Kool Everything (an acid-toting miscreant); Claude the Stoned Horse (who talks, bleakly and often); and the Slinger himself, an otherworldly being who sooth-says and surmises and slides through this post-epic with liquid proficiency. They are on a rambling path toward the “inscrutable Texan” called Howard Hughes, though this nomenclature is evidently symbolic, as—we come to understand—all persons of this name might actually be.

Dorn’s narrative is at once on-the-nose and broad as the horizon, and perhaps reflects the poet’s own aversion to tribe or party. He is speaking of plastic American culture, of the overlap of myth and suburban banality, of Capital and its homogenizing effect on the most rugged landscapes. But just when the reader is feeling this scope and gravity, they are also struck by the humor of his treatise:

“What happened to I she asked

I is dead, the poet said.

Shake him no more then!

we’ll keep him with us

for a past reference”

The more one reads, the more Dorn’s stanzas all seem to unfold like this: as little mechanized things unto themselves, half ontology and half joke. It is this level of craftsmanship—at a cool removal—which makes Ed Dorn a writer’s writer. J. H. Prynne praised his “rare precious quality of absolute independence of voice,” and Stephen King has used epigraphs lifted from Gunslinger in at least two novels.

Now with a timely foreword by Marjorie Perloff, Gunslinger has been re-released in a 50th anniversary edition by Duke University Press. The layout is active and appropriately tragi-comic, and might remind those holding the print edition of classic City Lights or Black Sparrow releases. It’s an essential piece of American literature, already, and the further we descend into an age of circuses without bread, the more poignant will be our Slinger’s aim on the true heart of the West.