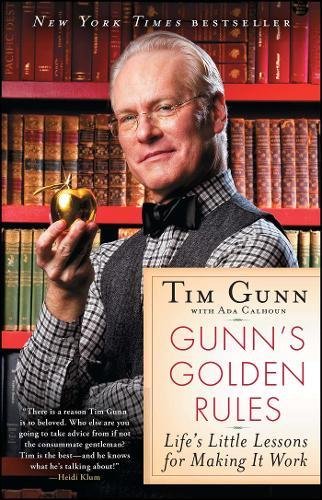 Some books are works of fine literature. Others are insightful and educational works of nonfiction. Still others are just a hoot to read.

Gunn’s Golden Rules is a hoot. In the guise of a book on etiquette, it is instead a hodgepodge of sense memories and True Tales of the New York Fashion Industry, with just a bit of “Project Runway” gossip thrown in for good measure.

As mentor to the contestants on once-Bravo’s-and-now-Lifetime’s “Project Runway,” Tim Gunn has become beloved in a way of very few reality television hosts. And for good reason: always polite, often fatherly, and amazingly knowledgeable, Gunn weekly dishes out large portions of emotional support and creative challenges. But here, in the pages of his second book, he just dishes.

And while that it a fun enough ride to keep a reader occupied for a few chapters, by the time Gunn begins to pad the text with his lists of “Five Top Movies About Fashion” and the like, a certain disconnect occurs.

This is not to say that there is not a good deal of fun to be had in reading Gunn’s Golden Rules. There is. Gunn—whose core message can be summed up as “Play Nice”—can be surprisingly bitchy when writing about the fashion business. Among the highlights, we are treated to the True Tale of Anna Wintour being carried down five flights of stairs by her bodyguards because she will not get into an elevator with other people, and a True Tale of Martha Stewart, in which Stewart fires both epithets and employees when Tim Gunn is found drinking a diet coke in the Green Room of her TV show. Tossed in for good measure are hissy fits from Andrea Leon Talley and Isaac Mizrahi.

Once he gets going, Gunn reaches far and wide to take all those to task who are not playing nice. With surprising grumpiness, he reduces both America in general and New York City specifically into groups of those who are surprisingly nice and those that who are better to avoid. In keeping with Gunn’s own tendency to organize his thoughts in lists, here are a few lists concerning Gunn’s Golden Rules’ content:

• People Who Do Not Tip Enough in Restaurants

• Lindsay Lohan (For Being a Bad Designer)

• Bette Midler (If You Don’t Buy a Tree)

• People Who Are Rude to Waiters

• Bravo, Now that “Project Runway” Is on Lifetime

• People With Big Backpacks on Airplanes or in Narrow-Aisled Stores

• People Who Do Not Say “Good Morning” to Doormen or Baristas

• Kenley from Season 5 of “Project Runway”

• The Countess from “Real Housewives of New York”

• Parents Who Endanger Their Children’s Lives While Crossing Streets

• People Who Are Polite to Bartenders

• The Movie Valley of the Dolls

• The Porta-Potties of Greenwich, Connecticut

People on the “Surprisingly Insightful/Do Not Mess With” List:

People Who Are Surprisingly Absent From All Lists:

Between lists and tips, we also get all-too-brief glimpses of Gunn’s distant mother and his disapproving father, a macho man who worked as a ghostwriter for J. Edgar Hoover. (Through his father’s connection, Gunn, as a young boy, is taken to meet comedienne Vivian Vance of “I Love Lucy” fame in Hoover’s office. It is only later, as an adult, that he figured out that Vivian was very likely Hoover in drag.)

Perhaps one day Gunn will stop giving us lists and, instead, put his efforts into writing a real memoir. There is much pain between the lines of Gunn’s Golden Rules, especially when he speaks about his personal and family relationships—suggesting that there is more to him than his Miss Manners guise would suggest.