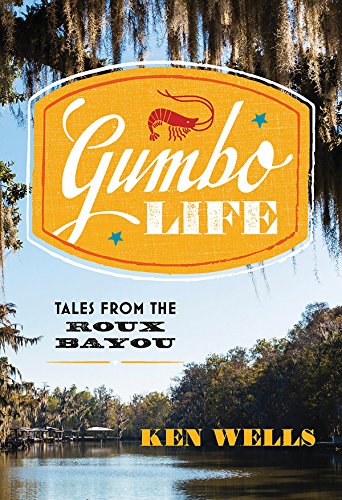 "Ken Wells, a career professional journalist, set out to tell a personal story of all things culturally connected with gumbo."

Gumbo is important to the culture of Ken Wells' Houma, Louisiana, "a drowsy Cajun hamlet" "proudly proclaiming itself 'Oyster Capital of the World.'" Wells fondly and entertainingly shares his rural upbringing in "Gumbo's Pantry, the great sweep of woods, fields, bayous, bays, marshes, and swamps," as well as of mules.

The author writes, "babies eat gumbo as soon as they go off the breast or the bottle." Gumbo Life tells this story around this hot spicy okra and rice soup that has so many variations. Ken Wells, a career professional journalist, set out to tell a personal story of all things culturally connected with gumbo. In Louisiana's Gumbo Belt "eating out is somewhere between pass time, sport, and religion."

"Louisiana gumbo is at least 250 years old, perhaps much older." Going back to at least 1764, "it's a cultural metaphor and anchor." Its "recipes and methods hand come down through generations, passed on almost exclusively by word of mouth."

Gumbo is "fusion" food, Mediterranean cooking using African and Native American flavors and ingredients. It likely began as an African okra stew but bouillabaisse "served as a pathway to some of the more complex versions of gumbo."

Historically, gumbo has included varieties of sea turtle gumbo and use of bear grease as lard. Native Americans used ground acorns, deer, and buffalo meat. They contributed smoking meat and the use of filé, ground sassafras used as a thickener. (The word gumbo may come from the Choctaw Indian word kombo, meaning sassafras.)

"These days, London, New York, Paris, Toronto, Madrid, Sydney, Copenhagen, and Tokyo are but some of the world's great cities with Cajun and Creole restaurants" that celebrate it and such dishes as boudins and "etouffees, jambalayas, courtbouillons, sauce piquant, fricassees." "Gumbo's creation, evolution, and triumphant ascension is a beautiful story with a happy, ever-evolving plot line."

Gumbo Life expalins how "the Gumbo Diaspora began as a trickle and then turned into a rollicking flood." It has become a growing billion-dollar industry and "while New Orleans is the hub, [the industry] includes many lucrative satellite operations."

The author's Cajun generational ties came through his mother's "large, extended, French-speaking Toups family." Wells' mother taught him in college that the roux ("flour browned in hot oil") "is the soul of the gumbo" but often served with "the Trinity" of "diced onions, celery and bell pepper."

"Gumbo, if you just stuck to the plan with love and attention, transformed itself into good magic." It has, however, required condiments: "Tabasco sauce; a bottle of home-made pickled pepper-infused vinegar; a jar of filé or ground sassafras leaves."

Wells grew up in a society where "if we didn't do for ourselves, we did without." These people knew poverty and lived what the author calls "the Gumbo Life much as my mother's and my grandmother's generation had experienced it."

On a six-acre farm, he grew up "fishing, hunting, and trapping" with his father and five brothers well served by his mother's traditional Cajun cooking. They lived "intricately woven by history, culture, and geography that gumbo could only have come from there."

Wells makes no pretense of objectivity: "My mother made the best gumbo on earth." For the general reader, the author includes "Some Helpful Definitions" to guide the novice to "South Louisiana's Gumbo Belt."