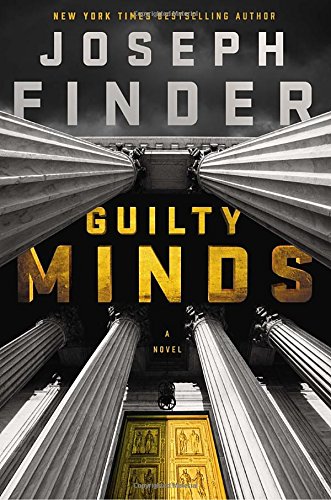 “Guilty Minds crosses the finish line a winner—suspenseful, swift, surefooted, and entertaining to the end.”

The clock is ticking even before “private intelligence operator” Nick Heller is officially on the case.

Heller flies from Boston to Washington, DC, to meet with legendary lawyer Gideon Parnell, a storied civil rights hero and now powerbroker and quintessential DC insider. Parnell wants to hire Heller, the best in the business, to stop a career-destroying exposé about to break in a Gawker-like gossip website that aims to take down one of Parnell’s clients.

The staff of Slander Sheet are sharks. They go for the jugular and never back down. But that doesn’t deter Heller. What does give him pause is Parnell’s reluctance to name his client and the mysterious client’s refusal to meet with anyone who could help him, even under a blanket of confidentiality.

But two can play at that game. After all, the clock is ticking. Heller signs on conditionally—only if Parnell’s client agrees to a private interview.

The client relents, and he turns out to have an extremely good reason for his reticence: He’s Jeremiah Claflin, Chief Justice of the Supreme Court.

Claflin is about to be accused of meeting a high-priced call girl not once, but three times, at a posh DC hotel, all compliments of a billionaire businessman whose enterprise benefited greatly from a decision handed down by the high court.

To further complicate Heller’s assignment, a former Washington Post reporter whose own reputation was destroyed when she stepped over the ethical line will publish the piece under her byline, hoping to redeem her reputation by breaking the biggest story of the year about one of the capital’s biggest names.

So with only 48 hours remaining, Heller must find cracks in the unmovable rock that is Slander Sheet.

Joseph Finder’s Nick Heller is a smooth operator. Part PI, part spy, he is an investigator for the new millennium. And like the best spies, he prefers to work in the shadows. He avoids the limelight. Clients find him by word of mouth.

“Lies are my business,” Heller observes in the book’s opening line. And, before turning her back on him, a woman admirer notes his propensities for privacy: “You’re, like, one of those deepwater fish . . . that live a mile down, where’ it’s almost totally dark . . . You prefer the dark. You’re all about keeping secrets.”

Which is true, to Heller’s advantage and detriment.

This third entry in the series, after Vanished in 2009 and Buried Secrets two years later, ratchets up the tension with a polished slight of hand. Guilty Minds crosses the finish line a winner—suspenseful, swift, surefooted, and entertaining to the end.