Guilty Admissions: The Bribes, Favors, and Phonies behind the College Cheating Scandal 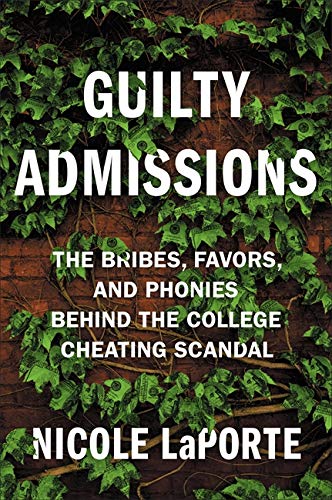 “To be able to brag that your son or daughter was accepted at Harvard or Yale or Stanford checked off a box for status-hungry parents. Anything less was tantamount to failure for your child—failure that somehow, in some warped mindset, tainted the parents.”

In the olden days, when dinosaurs roamed the earth and this reviewer was dipping his toes into the uncharted waters of college applications, the process was simple: go to high school and make good grades, take part in extracurricular activities, decide where you want to go to college, and submit an application. Of course, those were also the simpler days of rotary phones, three television networks, and Watergate.

Flash forward to the present, the era of smart phones, unlimited cable channels, and Capitol insurrections, and preparation for admission to college now starts with toddlers, or maybe even at birth. It’s a mind-blower, but author Nicole LaPorte deftly charts a course through today’s obstacle course of college applications in her fascinating expose of Rick Singer and the so-called “Varsity Blues” scandal that captured America’s fancy. If you wondered how it happened, and why, Guilty Admissions: The Bribes, Favors, and Phonies behind the College Cheating Scandal has the answers.

Somewhere between landlines and wireless internet, as the number of available slots in colleges only inched upward while the applicant pool grew almost exponentially, acceptance rates decreased dramatically, filling parents of even very young children with anxiety. As the author writes, “there is a budding industry of kindergarten-prep tutors and companies—the toddler version of independent college counselors—marketing themselves to freaked-out parents.”

And lest you doubt the line at the beginning about the process starting at birth, consider this from Guilty Admissions about a Los Angeles nursery school with a waiting list: “[M]any mothers call to procure a spot from the hospital, after delivering their child. . . .”

Of course, parents everywhere want to give their children every possible advantage, to preordain their future success. But for some parents, it isn’t enough for their kids to get accepted to “good” schools; it has to be the “best” schools. To be able to brag that your son or daughter was accepted at Harvard or Yale or Stanford checked off a box for status-hungry parents. Anything less was tantamount to failure for your child—failure that somehow, in some warped mindset, tainted the parents.

But as acceptance rates declined, a couple of shifts created additional obstacles to getting into those top tier schools. One was a shift by many colleges “to enroll more first-generation and underrepresented minority students in order to better reflect the country’s demographics.”

As LaPorte writes, “This shift has sent privileged parents into a tailspin, worrying that their accolade-drenched white kid from an academically rigorous school has become a tad, well, boring, in the eyes of an admissions officer.”

The other was a shift from the desire by colleges for well-rounded students to a desire for students who are “specialists.” Or, as the author describes it, “[S]omeone who takes his or her singular passion and turbocharges it in creative ways.” Take enough specialists, with a variety of specialties, and you now have, as one independent college counselor puts it, “a well-rounded class, not a well-rounded student.”

The result works to the detriment of students who are “generalists,” who simply can’t compete for the limited spots as jacks-of-all-trades but masters of none. And so, parents began to panic, seeking to get their kids in, literally by hook or crook. Hook or crook means the potential for scandal. And sure enough, that potential was realized, with Los Angeles—and its convergence of wealth, prestige, and naked competitiveness—as the epicenter when into its midst walked a prescient con man named Rick Singer.

LaPorte details the emergence of Singer as a powerful force in the world of college admissions counseling, falsifying applications for clients, “nailing a score” on SATs—sometimes by having a surrogate take the exam for a client, while at other times taking advantage of “test taking anxiety” as a disability to allow clients to take tests at home or under the less-than-watchful eye of one of Singer’s proctors.

Singer first plied, and perfected, his trade in other parts of the country before heeding Horace Greeley’s call to “Go west, young man.” He knew the right people on the inside of the right colleges and which side doors would open for his clients when front doors wouldn’t.

Those side doors operated on “donations” that were nothing more than bribes and kickbacks, blatant lies on applications, and non-athletes posing as athletes, at least on paper, to obtain the blessings of coaches and athletic department officials who greased the skids with admissions departments. And it worked. At least for a while.

Is it any wonder, then, that some offspring of the privileged exhibit a sense of entitlement when their parents were willing to lie, cheat, and steal—even if the stealing was for their children, robbing more deserving students of admissions—to ensure success for their progeny? It remains to be seen whether that conduct, ironically, sets up their children to fail when they find themselves in rigorous academic programs they are ill-equipped to master and there is no way left to game the system.

So, how did Singer’s scheme come unraveled? Surely, he was not betrayed by the parents, his co-conspirators in the fraud to give their offspring advantages that only wealth can buy. After all, that would implicate them, as well, and possibly their own children. The author concurs. “Singer’s assumption that parents would stay mum proved correct. A careless text message would not lead to his undoing.”

No, the ultimate turncoat was a sole parent who found himself implicated in a fraudulent pump-and-dump stock scam. In exchange for leniency, he ratted out Singer and brought his admissions fraud. It goes to show that you just can’t trust a criminal.

The book’s ending is somewhat unsatisfying as it leaves open what ultimately happened to Singer and many of his co-conspirators. We know some of it from news stories that have played out in front of cameras, about celebrities such as Felicity Huffman and Lori Loughlin, but the story is unresolved as to Singer.

In a true Hollywood cliffhanger ending, the author closes the book by teasing the moment that a prosecutor approached the cameras at a press conference: “The world was about to be introduced to Rick Singer.”

Guess we’ll have to wait for the sequel.