The Guilt We Carry 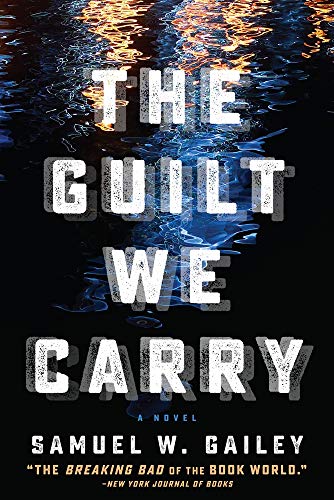 “the Breaking Bad of the book world.”

This is author Samuel W. Gailey's second book (Deep Winter was his first), and his screenwriting skills couldn't be more apparent in this superexcellent read that is right on in plot, pacing, and development of the protagonist. It's a book that will stay with you long after you turn the last page.

Guilt can kill and it very nearly kills 15-year-old Alice O'Farrell after her rambunctious little brother accidentally dies while in her care. With grief and despair forming a toxic mix that wafts into the very air she breathes, she runs away from home. With nowhere to go, she falls into a life of booze and depravity she can't seem to crawl out of. Six years later, gutsy, street smart Alice is forced to go on the run.

Alice is a bad girl with the unfortunate magnetism that attracts those even worse than herself. Such as 15-year-old Delilah who latches on to Alice early on in the book. Now you have two runaway bad girls who end up on the run, but you'll cheer for them every step of the way, because they're not nearly as bad as those they encounter. The police are after one of them, maniacs after the other.

True, Alice makes some imprudent decisions in her attempt to reach safety, the consequences of which fall into the category of no good deed goes unpunished. But they're decisions we ourselves might make under the same circumstances.

Gailey has structured the novel with a few backflashes to the inciting incident and its aftermath. But the transitions are so well done and clearly defined, readers always know where they are, never having to reread previous passages to ground themselves in place and time.

Olympics fans will especially enjoy the opening chapter describing a competitive swim meet as seen through the eyes of the swimmer, but they may be put off when they get to the second chapter and see that swimming is not mentioned again.

Until the end, that is. But heed this warning: DO NOT PEEK AHEAD to the oh-my-god ending, or you'll miss some outstanding plot twists; clever turns of phrase; characters that are written to life; vibrant settings you can see, hear and smell; and some of the gosh darn best writing out there today.

The author's description (with apologies to Amtrak) of a train ride is (pardon the pun) spot on: "The seats looked and smelled dirty. The material a tropical pattern. Blue, green, yellow and orange. All the colors faded and worn, covered with grime, coffee stains and old pieces of pink chewing gum. The windows were smudged by the hands of children and uncovered sneezes, the headrests stained by greasy heads."

Here's another: "Forty-three bucks barely covered two nights at the crap motel she'd been staying at for the last few months. The Comfort Manor—minus any degree of comfort and about as far from a manor as a cardboard box—did the majority of their business on a by-the-hour basis. . . . walls were paper thin, giving Alice an unwanted front-row seat to the obligatory moans of prostitutes banging their johns in the rooms on either side of her. The roaches were the size of rats in the summer, and the rats the size of cats in the winter."

The story is told from Alice's point of view. However, POV purists will surely cringe at the POV slips in places other readers will choose to forgive, ignore, or not even notice.

This book is an RCR and a BBE—a Roller Coaster Ride and a Best Book Ever. Relish in the reading of it, take your time even through the breathless parts, and enjoy every word. It's the Breaking Bad of the book world. A delish read with surprises to the very last page.

But the title could have been better.