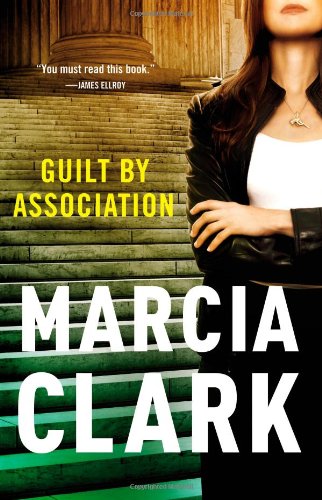 It may be a shame that Marcia Clark spent so many years as a prosecutor for the County of Los Angeles. I say this because she’s such a talented writer, as is made quite clear by this romp of a criminal justice novel. Because the book’s protagonist, Rachel Knight, just happens to be a Deputy District Attorney who works in the L.A. County Criminal Courts Building (CCB) one would think that there’s a bit of Ms. Clark in this character. Maybe, maybe not. . . . Rachel Knight may be a bit more daring than Ms. Clark was in real life.

One surprise is to be noted up front. This is not a courtroom novel. No scenes take place inside of a courtroom, so this is not a Scott Turow-style read. Basically, this is the story of a prosecutor who decides to become a criminal investigator, off of the time sheets and without the approval of her supervisors.

As Guilt by Association begins, Knight is celebrating a victory with fellow DDA, Jake Pahlmeyer and LAPD Detective Bailey Keller. It’s not long before Pahlmeyer is found dead downtown in a seedy hotel room with a 17-year-old boy; and there is a nude photo of the boy in his suit jacket pocket. Knight’s supervisors quickly tell her to keep her “hands off” of the murder investigation involving her best friend in the criminal justice system.

Being a bit of a rogue, Knight involves Bailey in her effort to clear the late Pahlmeyer’s name in a city where scandals are less than a dime a dozen. And as she does so, she also has to take over one of Jake’s cases: one that involves the rape of 15-year-old girl, the daughter of a very prominent physician.

Are the two cases somehow related? Maybe, maybe not. . . . You’ll have to read this criminal justice system mystery to find out, and to learn the meaning of the rather intriguing title.

You never know what’s coming around the curve. . . . Reading Guilt by Association is like taking a ride down the virtually mythical Mulholland Drive in a new Tesla roadster.

This reviewer does offer a prediction for the future of this protagonist. My money is on Rachel Knight’s getting fired by the D.A.’s office and working as an embittered, newly licensed private investigator who uses every contact in her address book to solve some of the county’s toughest and meanest crimes. Not only will it mean a series of great reads, but quite possibly a new hit TV show. “Rachel Knight, PI”—it somehow sounds just right!