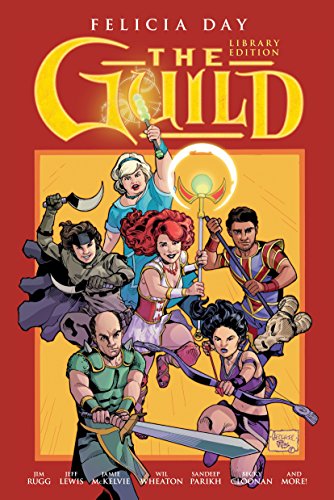 Chances are if you’re reading this you’re not what one might consider a comics reader . . . “typical” or otherwise. Although graphic novels have been the fastest growing category in bookstores over the past few years, the bays of manga and colorful superheroes perhaps do little to entice the casual reader.

Maybe you just never thought there was a book in there for you, maybe you’re willing to let your pop culture curiosity get the best of you but have no idea where to even start, or maybe I have you pegged wrong and you love comics. No matter the case, Felicia Day’s The Guild might be a book to consider.

Based on the popular web series of the same name, and penned by star Felicia Day herself (Dr. Horrible’s Sing Along Blog), The Guild serves as a prequel for the hilarious series and stands alone as its own story without any prior knowledge of the characters required, as well as adding a level of enjoyment for fans already familiar with the show. Additionally, the title tweaks the interest of the casual and committed fan alike, for the book delves into the interesting and bizarre gamer subculture of the MMORPG—Massive Multiplayer Online Roleplaying Game (World of Warcraft and EverQuest are popular examples)—and the awkward fine line fans walk between hobby and obsession.

We follow along in the life of Cyd Sherman and the slow disintegration of her relationship with her “chew-her-up-and-spit-her-out” musician boyfriend. At once both strung along and cast aside by the man she can’t help but love, her loneliness inspired desire to reinvent herself is what initially causes her to retreat into an online gaming universe and ultimately to the extremely odd community virtual friends she makes there.

Accessible to the layperson, but with plenty of “insider” humor for the diehard MMORPG fan, the book focuses far more on the mindset and dynamics of these offbeat characters than any actual fantasy adventure, and does so with a stylish witticism any fan of “The Office” should appreciate.

Day writes with clear and distinct voice, and as a fangirl herself, spins a very cringe-worthy tale of a dejected girl’s process of replacing her less-than-stellar real life with a more attractive fantasy one, and does so with an authenticity one really only expects to hear from the therapist’s couch. Few people are as aware of how seemingly pathetic their obsessions are than said nerds themselves, and Day is able to capably weave all those awkward, quirky, and anti-social traits into a carefully crafted character-driven narrative that throughout is as insightful as it is humorous.

Additionally, the genuineness of Day’s writing (particularly of her protagonist) makes this a very accessible title for women readers, another potential hurdle for half a planet’s worth of non-graphic novel readers triumphantly cleared.

Equal parts geeky love letter and cautionary tale, the seemingly simple premise of one girl’s introduction into a virtual life that may not be exactly healthy for her succeeds on a number of nuanced levels and should appeal to most readers, regardless of their own backgrounds in pop culture.

Who knows, maybe this is the book that gets you started being a fanboy/girl yourself. Be careful though, there’s enough awesome stuff out there to last for a lifetime. And it’s only fair to give people a heads up that they may like something too much. And like this book tells us that when you do . . . all you can do is smile.