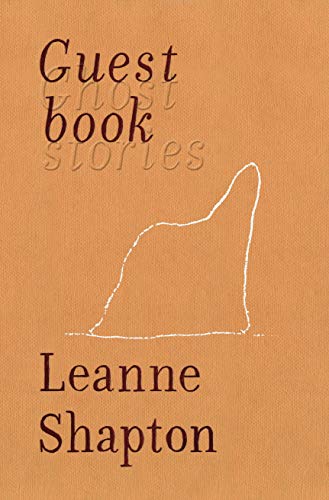 “Guestbook is best appreciated as a portable art installation. The book is enigmatic at every turn, but gorgeously realized. It pushes the boundaries of both ‘ghost’ and ‘story, . . .’”

Guestbook is strange in the way that being haunted must inevitably be strange. The book arrives with an unexplained photo tucked inside, the first of dozens of small mysteries that lurk around this uncomfortable volume.

This is not a conventional collection of short stories, though it is divided into titled segments. Like much of Leanne Shapton’s other work, there is a powerful visual component. Shapton is widely recognized as a designer and illustrator, and Guestbook is best understood as a bound art installation rather than as a book of fiction.

The first piece, “S as in Sam, H, A, P as in Peter, T as in Tom, O, N as in Nancy,” presents four human portraits, each apparently a found photo. Sam, the first, “has blue eyes. Ex-Royal Canadian Air Force, flew a B-25 bomber in World War II. Likes his sherry and salted butter and conservative politicians. He wants to cheer her up.” Peter is “the one who keeps her safe.” Tom is “mischievous with her fate,” and Nancy “is the one who makes her heart beat louder.” It’s unclear whether “she” is the haunter or the haunted. In this piece as in others, haunting is oddly recursive: Whether one is the haunter or the haunted one depends entirely on perspective, and perspective is in constant flux.

“Billy Byron” is more clearly a story, though much of it is visual. Billy, a tennis prodigy, appears through childhood pictures and parental portraits, each accompanied by a forensic comment. Billy’s parents smile through a history of violence: “Janine Wilmington and Ted Byron in 1978. . . . An order of restraint was issued against Byron after several incidents of domestic violence. They divorced in 1984.”

Ted vanishes from the story, replaced by coaches and, more urgently, Billy’s imaginary friend Walter. Walter is a sketch, a child’s creation, and for much of the story he appears only in implication. Billy’s coach observes that “the boy seemed to have an uncanny sense for where the ball was going.”

The sequence balances that “uncanny sense” with the bourgeois enthusiasm of competitive tennis. Walter, the increasingly intrusive companion, lurks behind promotions for Rolex and Perrier. Billy conceals his face behind towels and his own body. After childhood, he never again looks at the camera.

Billy’s tennis acumen is magnificent and destructive. He breaks down emotionally and physically even as he triumphs. Walter’s “presence” is the only force in Billy’s life never photographed. His existence is documented largely in Billy’s increasing physical and psychological agony, itself masked by the elaborate, performative emotions of sports photography.

“Eqalussuaq” is less narratively driven, but equally horrifying in its balance of self-satisfied materialism and grotesquerie. This story juxtaposes accounts of the Greenland shark, an almost-immortal, little-known deep-sea creature, with the deliberately “charming” menu suggestions for a private retreat or cruise. At left, a 19th century news account of how to enjoy the shark’s liver: “It is usually prepared as food by a process of fermentation, the flesh being buried in the ground. When fermented the meat is slimy and jelly-like.” At right: “At cocktail hour, a varying plate of charcuterie would be ideal. . . . Complicated cocktail party canapés are not our style, so please don’t devote time to them!”

Some stories are less clear in their purpose. “A Geist” presents a series of captioned photos of an actor at public events. Its presence in the book suggests haunting, but little in the sequence actually reinforces that idea.

Other pieces are anti-stories. “Natura Morta” presents vintage photos as Instagram-style images, complete with numbers of likes. “Who is This Who is Coming?” offers only images of a shroud, alternating with irregular blank pages. The human figure sustaining the shroud is entirely absent. Here is the classic figure of a ghost, but completely without context. Its strangeness is its entire story.

Guestbook is best appreciated as a portable art installation. The book is enigmatic at every turn, but gorgeously realized. It pushes the boundaries of both “ghost” and “story,” and the discomfort that it creates crawls beyond the covers of the book and into the mind, haunting long after the last page.