Guardians of the Trees: A Journey of Hope Through Healing the Planet 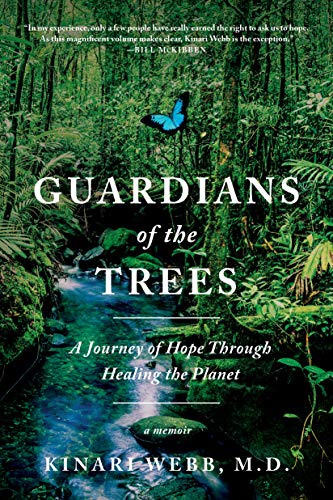 “Perhaps the most important story is Webb’s own, as she shows that we are all imperfect people capable of creating a more perfect world.”

Kinari Webb has a knack for surviving experiences that would kill most people, so perhaps it’s not surprising she forged her own path to championing the health of people and the planet.

Going to Borneo as an undergraduate to study orangutans, Webb fell deeply in love with the beauty of Indonesia’s rain forests. Guardians of the Trees is graced with descriptions of the diversity of life even within small spaces: “Every possible space is filled with vegetation: trees, vines, bushes, lichens, mosses, and epiphytes. And every bit of vegetation is covered in ants and insects; clumps of leaves sometimes release clouds of bats when bumped; every dangling vine looks like a snake, and some actually are."

Seeing massive logging occurring everywhere she looked, and talking to local people about their needs, led Webb to an unorthodox conclusion. The way to save the rainforest was to save the local people who logged for quick cash to pay for vitally needed but scarce medical care. Webb returned to the U.S., became a doctor, and came back to Indonesia to found ASRI, a holistic program of low-cost or barter-based medical care combined with community-created incentives to reduce or end logging. Through “radical listening,” ASRI followed the lead of local people to implement effective, grassroots solutions from training in organic farming to chainsaw buybacks. Logging dropped, community health rose, reforestation regenerated thousands of rainforest acres, and communities that left logging for sustainable economies thrived.

A scientist who came to a deep spirituality, Webb’s near-fatal encounter with a box jellyfish prompted years of ill-health and soul searching that ended her marriage but deepened her commitment to protecting and restoring the world’s rainforests: “Yet like the pain I found in the deepest throes of death, when I truly looked at the pain of the earth and finally let it sink in, I began unexpectedly to have hope for our future. The human species may be deeply flawed, but we also have the capacity for beauty, transcendence, and unexpected rapid change.”

Toward the end of Guardians of the Trees, Webb recounts when her flashlight batteries died stranding her in a pitch-black forest, hours from the research station and unlikely to survive the jungle night. Realizing the path to the station was too foot worn to glow with the jungle’s phosphorescent fungus, Webb followed “a ribbon of pure black through the distant galaxy of starlight on the forest floor. I followed the darkness, and after many excruciating hours of making my way along that fearful journey, it led me to home and safety.”

While Guardians of the Trees is a path through our planet’s climate darkness, Webb arguably covers too much ground too shallowly. The dynamics of locally based, radical listening deserves its own book or two. Webb recounts her tumultuous childhood, marriage, and medical and spiritual journeys with an understandable discretion toward family and friends that nonetheless obstructs deep reflection.

Yet the strengths of this much needed book are many, from showing the daily and often dangerous difficulties of research work to the life- and world-changing importance of not “educating” local people but instead collaborating with them in creating economic and medical systems that make habitat protection and restoration part of community life. Perhaps the most important story is Webb’s own, as she shows that we are all imperfect people capable of creating a more perfect world.