The Guardians: A Novel 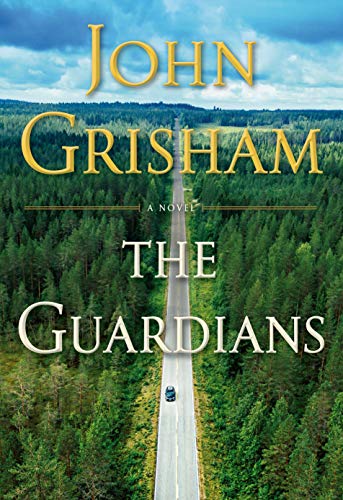 “With The Guardians, John Grisham is back in top form with his latest legal thriller. . . . The Guardians is as gripping as it is shocking, with plenty of twists and turns you never see coming.”

Thirty-eight year old Duke Russell is eating what possibly could be his last meal of steak and fries, on Alabama’s notorious death row. He was hoping to wash the meal down with some nice cold beers, but the Warden didn’t see the funny side of that last request. Although totally innocent, Duke’s been fast-tracked for lethal injection, having been on The Row for only nine years. Only nine? The average in Alabama is 15 to 20 years.

Standing beside him during his last hour is Cullen Post, a lawyer who, for the last four years, has fought to prove Duke’s innocence. Cullen travels the country fighting wrongful convictions and taking on clients forgotten by the system.

Duke was charged with rape and murder of a woman called Emily Broone, but Cullen believes the man was steamrolled by a corrupt system. Prior to all this, Duke’s only brush with the law had been a few speeding tickets and two DUIs. Violence had never been part of his modus operandi.

Cullan is still haunted by at least one innocent man executed by the system, and vows to do all in his power never to let it happen again:

“I’ve watched one of my clients die. I still believe he was innocent. I just couldn’t prove it in time. One is enough.”

As the clock ticks away the last few minutes of Duke’s life, Cullan is hoping for a reprieve for his client. He is not confident of that happening and says a silent entreaty to the Big Man Upstairs, hoping that being an Episcopalian pastor might just sway the decision in favor of Duke and stop the clock ticking toward death.

While watching Duke eat his last meal, Cullan thinks back to years prior, after becoming disillusioned about his role as criminal lawyer, walking out of court one day vowing never to return. A nervous breakdown followed the breakdown of his marriage, he was looking into the abysses of psychosis and hopelessness when he met Father Bennie Drake, an Episcopal priest at his hometown church. Influenced by Drake’s words and actions, Cullan eventually found his calling and was himself ordained.

Shortly afterward, he meets Vicki Gourley who would come to be as big an influence over him as had Drake. Gourley is the founder of Guardian Ministries, and runs it from an old warehouse in Savannah, Georgia. The Ministries is made up of a tiny group of understaffed and underfunded attorneys and investigators seeking justice for those who the legal system has failed, hoping to exonerate prisoners wrongfully accused and convicted, most of whom are on death row or serving life sentences.

They only accept a few innocence cases at a time and are inundated with hundreds of letters from prisoners all professing their innocence. It would be an understatement to say the task of deciding who exactly may be innocent is overwhelming.

Back at death row, Cullan’s cell phone vibrates in his pocket. It’s the call he’s been waiting on from a law clerk at the Eleventh Circuit that will determine Duke’s fate. Duke looks at the expression on Cullan’s face trying to read something from it. It’s blank. A few tense seconds go slowly by before Cullan nods to Duke.

“You got a stay. No needle tonight. How long will it take you finish that steak?”

After leaving a grateful and relieved Duke alone with his thoughts, Cullan heads two miles down the road and stops at a closed country store to make a call using a burner. He checks to make sure he’s not being watched, then calls the number he obtained illegally.

“‘You don’t know me, Carter, but I’m calling from the prison. Duke Russell just got a stay, so I’m sorry to inform you that the case is still alive. Are you watching television?’

“‘I’m sure you’re watching the TV, Carter, sitting there on your fat ass with your fat girlfriend hoping and praying that the State finally kills Duke for your crime. You’re a scumbag Carter, willing to watch him die for something you did. What a coward.’

“‘Oh, I will Carter, one day in a courtroom. I’ll find the evidence and before long Duke will get out. You’ll take his place. I’m coming your way, Carter.’”

Cullan quickly ends the call, not wishing to push his luck with his recklessness. Eleven years ago, Mark Carter raped and murdered Emily Broone, pinning the blame on Duke. Now all Cullan has to do is prove it. Easier said than done, of course.

Mentally and physically exhausted by the last few days of fighting for Duke’s life, Cullan knows he can’t rest on his laurels. He has other clients on death row, and quickly focuses his attention to Quincy Miller.

In the small Florida town of Seabrook, a young lawyer named Keith Russo was shot dead at his desk as he worked late one night. The killer left no clues. There were no witnesses, no one with a motive. But the police soon came to suspect Quincy Miller, a young black man who was once a client of Russo’s.

Quincy was tried, convicted, and sent to prison for life. For 22 years he languished in prison, maintaining his innocence. But no one was listening. He had no lawyer, no advocate on the outside. In desperation, he wrote a letter to Guardian Ministries.

Cullan was assigned the task, and with his usually steely determination, sets about trying to prove Quincy’s innocence.

However, with Quincy Miller, Cullan will soon learn that he got far more than he bargained for. Powerful, ruthless people murdered Keith Russo, and they do not want Quincy Miller exonerated. They killed one lawyer 22 years ago, and they’ll have no qualms about killing another to hide their secrets. Cullan is now in their sights, and a finger is slowing pressing on the trigger. . . .

With The Guardians, John Grisham is back in top form with his latest legal thriller. Based on the true story of James McCloskey, founder of Centurion Ministries, The Guardians is thinly disguised as fiction. To date, 63 men and women owe their freedom to Centurion Ministries, a shocking number when you realize all these people were innocent and could so easily have ended their days on death row, labeled guilty. The Guardians is as gripping as it is shocking, with plenty of twists and turns you never see coming. Grisham is our modern-day Dickens and Twain with a social conscience and message, but always the master storyteller to entertain. The Guardians is proof of that.