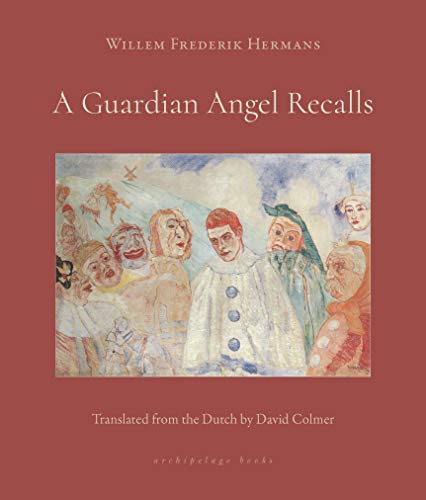 “Hermans has written a classic with this book, a scathing exploration of human nature, of the small pettiness that consumes people even in the most dramatic of situations.”

One of the Netherlands’ most acclaimed writers, Willem Frederik Hermans is barely known in the United States. This superb translation of his novel, A Guardian Angel Recalls, by David Colmer should change that. Hermans was a keen observer of human nature and in this previously untranslated work, he takes a chaotic, complicated situation—the Nazi invasion of his country—and presents it in keen, telling details.

The story is told through the point of view of an angel assigned to protect Alberegt, a public prosecutor. Though his life’s work centers on upholding the law, on being aware of the difference between right and wrong, Alberegt is woefully blind to his own hypocrisy. The book opens with him putting a German Jewish woman on a boat headed for England. Alberegt selfishly requests her to sstay with him, reviewing their four months together when she had become his lover while he used his status to protect her. Was the sex an exchange for security? Was there a real relationship given the power imbalance between the two? Alberegt allows himself a glimmer of honesty, one he quickly shuts down:

“Without him she would have been taken back to the German border, handed over to the Germans, and, who knows, maybe tortured to death by the Gestapo. Wasn’t it possible that this act could have aroused her love? Was he such a monster that her departure had revealed the truth? She’d been grateful for a while but had never loved him. . . . His sorrow was immense, but it was the sorrow of a respectable man.”

The angel tries to keep Alberegt from listening to the devil and continually casts Albergt’s choices and actions in the best light possible, even when Albergt makes the angel shudder in shame. The worst is when Albergt drives erratically, causing a terrible accident that kills a child. This incident drives the bulk of the narrative as Albergt is consumed by guilt and fear of being discovered. Even as the Germans invade, as his office is bombed, and colleagues are killed, all he can think about is the body he’s thrown into the bushes and its possible discovery.

The mundane ways that life goes on even under the most horrendous upheavals is part of the brilliance of this story. As the angel describes it, war is simply another form of human behavior:

“War is just an optical illusion that afflicts earth’s mortals. It is a red mist that covers the windows, through which everything can still be seen as before, or a constant ringing in the ears while all other sounds continue as usual. War is in agreement with all the laws of God and nature. If the devil, in his arrogance, thinks otherwise, such thoughts could never be entertained by an angel. War changes nothing about the essence of life and nothing about the singularity of death. . . . War doesn’t change morality either, as necessity knows no law and earth is no paradise, so there is always necessity.”

Hermans has written a classic with this book, a scathing exploration of human nature, of the small pettiness that consumes people even in the most dramatic of situations. At the same time, he provides a vivid depiction of the confusion of war as conflicting rumors and fears motivate his characters. As relevant as the day it was written, this book should become part of the literary canon taught in colleges, one of those stories that should be read as widely as possible.