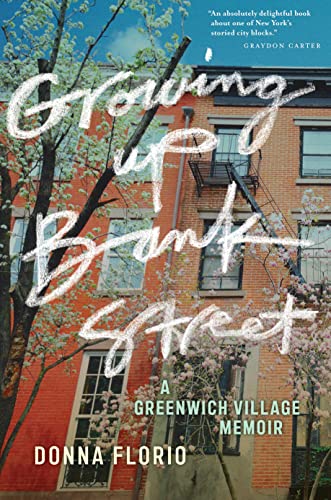 “’Being an opera singer was fun, but the people on Bank Street, caring for and about each other, taught me what it means to be human.’”

What do journalist Charles Kuralt, actors Jack Gilford and Theodore Bikel, John Lennon, Sid Vicious (of Sex Pistols fame), the infamous Harvey Weinstein and author Donna Florio have in common? At various times throughout the 20th and 21st centuries, they all lived on Bank Street, a six-block long canvas of brilliant colors in Greenwich Village, as depicted in Growing Up Bank Street.

Donna Florio was born in the mid-1950s, the only child of opera performer parents. Her mother, Ann, was an opera singer, and her dad, Larry, was an aspiring theater director.

Donna made her debut at four in Madame Butterfly, in a local theater, wearing a kimono and flip-flops.

Eventually, Ann, along with Donna, sang at the Metropolitan Opera, with Leonard Bernstein leading. “No one else in junior high had a life like mine.” And she was witness to numerous opera-employed backstage child predators during “those dismally incorrect times.”

There were always the characters on the six-block-long Bank Street who served as her family when her parents were too busy working. “Being an opera singer was fun, but the people on Bank Street, caring for and about each other, taught me what it means to be human.”

The eccentric woman who was the real Auntie Mame, an ancient Buddhist on whom the musical and movie were based, babysat young Florio, a few doors down at 72 Bank. She entertained Florio with strange visitors and an old trunk full of twenties’ Shalimar-scented flapper garb, boas, and tiaras.

The mother of the producer of the TV show, Captain Kangaroo, was a neighbor who, while Florio played in the local park’s sandbox, confided in Florio’s mom, the reason for the creation of the Mr. Greenjeans character: “. . . the Captain was too plastered to go on the air, which apparently hap­pened with cheery regularity.” Thus, the farmer Greenjeans often filled in.

Bella Abzug, mother of the feminist movement, rented in a brownstone at number 37. “She was a fierce, scary neighbor, sort of a two-legged nuclear plant, radiating power.”

In 1971 Florio had a close encounter of the former-Beatles kind. John and Yoko, who lived at 105 Bank St., were strolling by under Florio’s fire escape, as she became distracted and poured water on them below. “Was there even a category for stupid enough to pour petunia water on a Beatle?”

Florio left for Boston University, traveled extensively in Italy, and returned to marry her high school boyfriend. They soon divorced and she had many career turns, including a master’s degree and then TV production. She lived for a spell in Asia but always returned to Bank Street. She lived through 9/11, a few blocks away, holding a student whose mother died in Tower 2.

In the ’80s, AIDS arrived in the Village, massacring many of Florio’s dear friends. “The arts world collapsed.” Theatrical pal Billy urged Florio to help where she could, while issues such as contagion and treatment were still unknown.

Intricate details of life on Bank Street allow the reader to share the author’s historical perception of her small corner of heavenly nostalgia. “This building, I came to realize . . . holds the story of America.” Exciting photos in the centerfold place faces with names.

With “Spaldeens” from the five-and-dime store; the drug store’s ice cream counter; deceased Sid Vicious and oh-so-many celebrities—both notorious and infamous; the Commies; the alcoholic hoarder; the butcher shop; and Italian restaurant, Florio provides a taste of not only her building at number 63, but of a most colorful piece of Greenwich Village, Manhattan real estate, filled with eccentric and perhaps the most diverse characters in this universe.

In Growing Up Bank Street, Florio shows the reader that “I love NY” is not just about Times Square. “Every street in America is a Bank Street in its own way.”