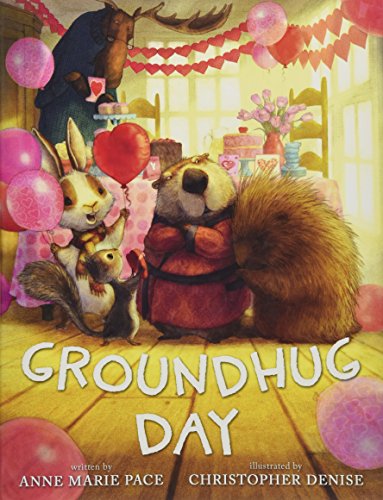 “Clever . . . a nice addition in preschool, kindergarten, and first grade classrooms or on a child’s bedroom bookshelf.”

Moose wants to have a Valentine’s Day party. Squirrel, Bunny, and Porcupine are all in, but Groundhog might not be able to come. If he sees his shadow on February 2nd, he will have six more weeks of winter, and he will miss the party!

Moose and the gang devise ways to keep Groundhog from coming out of his hole. But they argue all night and don’t notice that Groundhog has already come out, wearing his robe and carrying his coffee cup. Now that he has seen his shadow, the gang realizes that Groundhog is afraid of shadows. The four members of the forest gang come up with four ways to show Groundhog that shadows are fun. The only bothersome part of the story is that Groundhog stays above ground for the day, playing with shadows. Would a groundhog that has seen his shadow do that? Bright kids will wonder, too.

Groundhog gives hugs all around, except to Porcupine (too prickly), and after a nose kiss for his spiky friend, he goes back into his warm hole.

When he emerges six weeks, later, Groundhog suggests a St. Patrick’s Day party. But now Bunny is missing. And this is the best part of the story: He is busy painting Easter eggs for his favorite holiday.

The concept of animals in the forest planning their holidays to include everyone, and the problems they run into, is a fresh idea that works well. It is interesting that Bunny was not Rabbit, to match the formality of the other animals, but it is necessary for the punchline on the last page.

The illustrations are top-notch. Some of the highlights, besides Groundhog in his robe with piled-up newspapers at his door, are Moose’s glasses and textured turtleneck sweater, Porcupine’s adorable face, the animals’ chalkboard thoughts, the clever shadows, the earth tones with popping colors on the animals’ clothes (yes, some wear clothes), and the muted backgrounds.

Many pages have spot art to move the story along, since it covers several weeks. The book only has three double spreads and seven single spreads. It works with lots of white space around the words. Even Grandma or Grandpa will be able to read the book in dim light with the black ink popping off the white pages.

Like Donald Duck, the animals only wear a scarf, or a coat and hat, or a sweater. None of them wears any bottoms. And Squirrel and Porcupine are naked. Bright kids will notice.

The best spread is the last one, where Bunny is delicately painting a pink egg with the help of a magnifying glass and a huge desk lamp. Shelves filled with finished eggs are shown behind him. The end papers are red on pink: balloons, Valentines, and lots of hearts. The book is good for four holidays, and teachers can read it from February until Easter. Very clever.

Jewish families won’t relate to the Easter part. Maybe Disney can do an alternate edition with Passover where Bunny is setting his Seder table.

Little girls might notice that three of the five animals are males. It might have been nice to have a female animal in there somewhere. Squirrel and Porcupine (the naked ones) are gender fluid.

The title is catchy but not accurate. The book is about much more than Groundhog Day. Groundhug Day will be a nice addition in preschool, kindergarten, and first grade classrooms or on a child’s bedroom bookshelf.