The Grind: Inside Baseball’s Endless Season 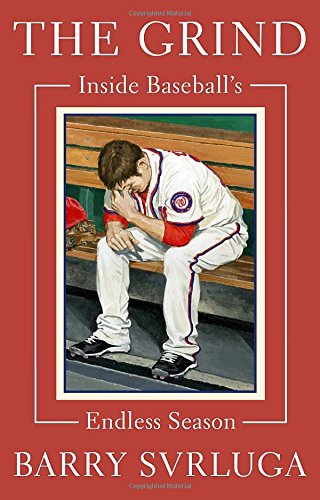 No other professional sport relentlessly pounds away at all its participants like the 162-games of a major league baseball season, and author Barry Svrluga’s book, The Grind: Inside Baseball’s Endless Season, artfully captures the shared as well as the individual tolls paid by the players, their families, and the game’s executives over the long march that comprises a major league baseball season.

Prompted by a series author Svrluga wrote as the beat reporter for the Washington National’s baseball team, despite everyone featured being members of the Nationals baseball team family, a fan of any MLB team will immediately recognize and identify his favorite’s team’s corresponding cast of characters due to the universal nature of the game.

While most baseball books generally document a team’s successful or failed championship chase, Svrluga’s short tome is a page-turning, behind the scenes story about those who make baseball their daily life’s overriding experience. Each “player” covered in the pages of the book continues to come face-to-face with the enormous pressures they undergo in performing their respective roles within the drumbeat of nearly a game every day over the course of the season, with little or no respite from “the grind.”

His book brings to life a part of the game most fans may intuitively acknowledge, but few stop to ponder, rather focusing their gaze on the trappings and fame enjoyed by those who take to the field for the three-hour shifts that comprise most games played. Svrluga provides an entertaining read in understanding how everyone associated with the game in every aspect of it, comes together to launch a major league season and bring it home to port.

Starting with the player’s early preparation in navigating his way through the marathon of the coming season, he begins with their winter conditioning through the need for ice baths, heat treatments, stretching, weight-lifting, all timed and methodically executed, to fortify the players for stretches that include 25 games over a 26-day time period, while also knowing there may still be more than 130 or more games to play.

A good portion of the book covers veteran player Ryan Zimmerman who is entering his ninth full season with the anticipation and excitement of another year chasing a championship. This overall goal squats in the future, but for the veteran, it comes with a knowing understanding that even for a player in his late 20s, young by normal societal standards, he must view the game with the squinted eyes of a man who knows what happens to a person’s body when faced with the physical as well as the psychological demands of living through 162 games of baseball.

From the veteran through others like the 26th man, a player who bounces back and forth from the minor leagues to the majors, to the relief and starting pitchers, each skillset and experience is carefully critiqued and analyzed by Svrluga as to the individual nature of the role to its part of the overall structure within the great game.

He also expertly shows how each of the various player roles, while part of the whole, brings its own set of skills, responsibilities and expectations to the park each day. He notes the subtle differences in how a player interacts with the game as a batter who can redeem himself from a 0-4 day one game to the next by driving in the winning run, while a starting pitcher who fails in his last outing has to deal with the five days off before he gets his chance to re-stake his claim to being a contributing teammate. Showing again, the collectiveness yet unique aspects of what makes up a major league roster of players.

Svrluga deftly combines the telling to also include other individuals, like the player’s wives, the talent scouts, general managers, and possibly the most important, yet underappreciated by the fans, the clubhouse and team operations managers and staff whose talents and endurance also lend their cadence to the beat of a season.

Throughout it all, there is a recurring theme. For all participants within the daily grind, baseball remains king, and all who serve under its royal rule, endure by sharing one trait: an absolute love for the game. Svrluga’s book clearly shows that without that abiding passion for the sport, the game could not continue to exist.