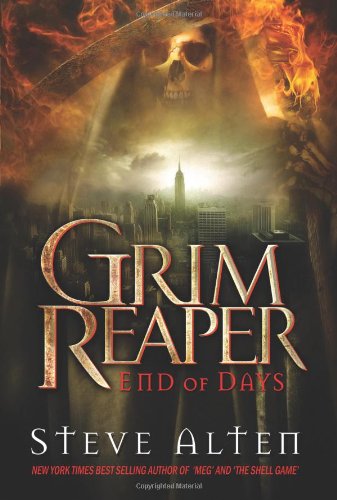 In Grim Reaper: End of Days, Steve Alten offers up an ambitious tale of a hero’s journey through Hell. In this case, Hell comes in the form of a plague-infested Manhattan. Mary Klipot, a microbiologist working for the Department of Defense’s biological weapons program, develops an enhanced, fast-acting version of bubonic plague called “Scythe.” Unfortunately for New York, Mary is delusional, believing that God has commanded her to unleash the virus in the city. In the Manhattan VA hospital, Patrick Shepherd, Iraqi War veteran and amputee, is trying to piece together his shattered memory, with the hope of reuniting with his estranged wife and daughter. During his convalescence, Shepherd is approached by military brass who plan to use him in their propaganda efforts. Once Scythe is unleashed, however, Shepherd finds himself on the run and in possession of the only known antidote. With an aging, shamanistic hippie as his guide through the complete social disorder that grips Manhattan, Shepherd will confront gang-bangers, looters, religious fanatics, rogue agents, and his own past lives as he races to deliver the antidote to his wife and daughter. Alten sets the stage for a gripping techno-thriller with some time-tested elements—Manhattan as a sealed-off prison, an apocalyptic virus, shadowy government entities, a flawed and reluctant hero. All of this is fine, even welcome, given the title. Alten, however, doesn’t trust his readers to understand metaphor and symbolism, preferring instead to flog them with a diatribe about the pitfalls of modern society and the rise of the “military-industrial complex” (a phrase that sees repetitive usage). Some of the minor characters, such as a mysterious Eastern monk, are fascinating while others are stock. All of the characters seem desperate to live and breathe, poking through occasionally between lengthy exposition. When at last they are given the chance to do so, the book takes off, with the action coming at a breakneck pace. Eventually, it becomes an allegorical retelling of The Inferno. Even the guide’s name is Virgil, just as it is in Dante’s epic poem. Alten’s modern-day morality tale feels like three different books—cautionary essay, fast-paced thriller, and a cosmologic acid trip with a host of supernatural beings. The narrative is confusing at times. Minor characters and subplots arise at inexplicable moments. Few of those are brought to any satisfying conclusion. That said, there are enough twists and turns to keep readers guessing until the final pages. While some of the plot devices have been seen before (think: The Andromeda Strain, Escape from New York, I Am Legend), and Alten has chosen to echo classic literature, there is enough originality for fans of this genre to remain engaged. And for those who can’t get enough, take heart: This is the merely the first volume in a planned trilogy.