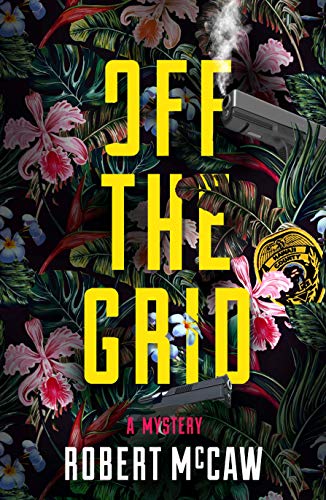 “Off the Grid is flush with action and vivid descriptions.”

This book, set on the Big Island of Hawai'i, starts off with a bang. Literally!

A Honda Civic is upside-down in a ditch crunched under the front end of a county dump truck. Fire has broken out and oily smoke blossoms into the air.

Hilo Chief Detective Koa Kane isn't usually called to traffic accidents, but the driver of the dump truck has gone missing. Watching the firefighters battle the flames, Koa's mind is filled with thoughts of the enormous litigation the county will face if the driver of the truck, a county employee, has left the scene of a fatal accident.

Kane approaches the crash, but is stopped in his tracks when he hears a stomach curdling scream:

". . . Someone—it sounded like a woman—had survived the accident only to be trapped in the flames. . . . Acting on impulse, Koa sprinted toward the vehicles. It was a stupid move . . . but he barreled ahead . . . He was twenty feet from the smoldering wrecks when they exploded in a fireball.

"The front end of the dump truck rocketed upward, absorbing most of the force of the explosion. Still, the shock wave spread like a tornado, slamming him to the ground. An explosive thunderclap deafened him, so he barely heard the whine of flying metal, but something hammered his left shoulder and pain spiked down his arm."

Author Robert McCaw is skilled at using these kinds of you-are-there descriptive passages throughout the book, deftly placing them in the text in a way that draws readers into the action at the same time they are admiring the writing.

". . . The two firefighters knocked down by the blast had lost control of the fire hose which thrashed back and forth like a mad python, threatening to decapitate anything in its path. The hose swung away, smashed into the ground, and whipped back toward Koa with deadly force. Only his combat training saved him. He dove to the ground and heard a whistling noise as the nozzle slashed through the air just inches over his head."

Chances are the author has not actually seen a fire hose break away like that, and here's betting only a handful of readers have witnessed it, but author McCaw draws the kind of word picture that makes readers think they are actually on the scene.

And just wait for the hot lava scenes. They'll definitely make you feel like you need to lift the soles of your shoes away from burning coals.

No sooner does Detective Kane begin to suspect the dump truck accident was staged when he gets a 701 call on his radio—701 is police speak for first-degree murder. A dead body has been found in a lava flow.

What follows is a bit of history about the Kilauea Volcano that destroyed an entire subdivision back in the eighties. Molten rock pushed through the streets consuming homes, cars, and everything else in its path, burying it under more than one hundred feet of lava, leaving only remnants of rooftops and isolated stop signs sticking out of solid rock. There are numerous photos on the Internet of the volcano's aftermath. McCaw describes how some residents have remained in their homes on the scattered islands of land not touched by the flow even though surrounded by lava that still smolders and bubbles in places.

It's into this environment of active lava that Kane and his crime scene techs are called:

"Deep crevices, many large enough to swallow a man, separated lobes of ebony rock. Porous charcoal-like stubble coated the recently cooled lava, and brittle bubbles of rock left by air pockets crunched beneath their feet. The smell of sulfur gas came and went with the wind gusts."

Det. Kane had seen dead bodies in Somalia during his military service but had to fight off those memories when viewing this one.

"The shriveled, naked, partially burned corpse lay in an irregular gap between two lobes of lava rock. . . . Birds had pecked out the man's eyes, leaving gory sockets. Heat had seared the man's flesh . . . His lips had shriveled and his mouth hung open in a grin . . . The hot rock must have ignited the deceased's clothes, leaving burnt scraps of blue denim . . ." One of the victim's arms is entombed in the hardened lava and there was only one way to remove it.

Kane rightfully suspects the murder is somehow connected to the car accident.

Author McCaw has drawn Koa Kane with tremendous depth of character, traits that made him a good detective. He's honest, ethical, hardworking, courageous, a man who would make a great neighbor or a terrific friend or a solid son-in-law. But Kane has a secret he hasn't shared with anyone. He's killed a man and gotten away with it. Read on to see what the murder victim did to end up dead.

Off the Grid is flush with action and vivid descriptions. This unputdownable book is sure to make a mark in the literary world.