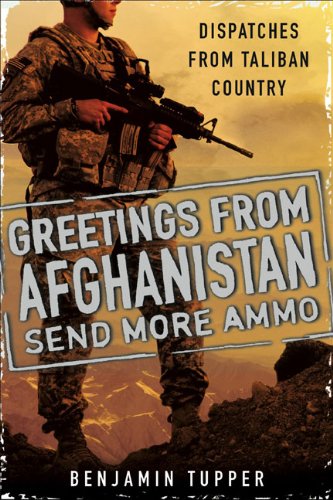 Army National Guard Captain Benjamin Tupper brings us this important collection of blogs and essays from his year-long tour in Afghanistan. Tupper was part of an Embedded Training Team (ETT), a small unit tasked with training and advising divisions of the Afghan National Army. His observations are frank, insightful, and offer a detailed account of the current situation in a theater where American soldiers are giving their lives right now.

Anyone who wants a better understanding of what is happening in Afghanistan should read this book.

Tupper’s position as an ETT soldier is arguably one of the most dangerous jobs in the current War on Terror. ETT members are separated from the main U.S. forces and sent out in groups of two to live and fight amidst Afghan units of approximately 100 men. These warriors experience combat without the protection of well-trained, well-equipped U.S. comrades at their side; in fact, they become the main targets of their adopted units, sticking out like sore thumbs in their American Humvees.

Tupper wrote this book in real time from May 2006 to May 2007 as a blog followed by thousands of readers. His stories range from amusing but frightening tales of Afghan soldiers dutifully laying unexploded mines at his feet to graphic transcripts of combat action pulled from a fellow soldier’s home video camera. Readers will marvel at the bravery of ETT soldiers and Afghan regulars facing down the Taliban and then cry as they witness the suffering of Afghan children through Tupper’s eyes.

In the final chapters, Tupper recounts his fight in one of the hardest battles faced by American soldiers throughout history: the battle against Post Traumatic Stress Disorder. He describes the nightmares, losses, and daily challenges of living with this debilitating disorder. In the end, Tupper leaves the reader with a better understanding of the combat faced by today’s soldiers and the burdens they will carry long after the bullets stop flying. Tupper’s writing is superb.

Greetings from Afghanistan, Send More Ammo belongs on bookshelves alongside such well-received works as Flags of Our Fathers and Battle Cry of Freedom. Students of military history or history in general would be remiss if they overlooked this book. That is not to say that this book is for young students. Tupper’s work is as graphic as one might expect from uncensored combat reporting, but that is as it should be. This book is pure, powerful, moving history, our current history, and we should strive to understand it.