The Greeks: A Global History 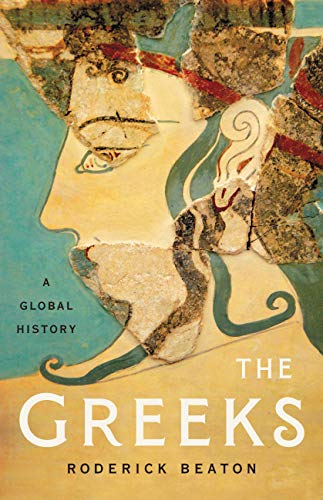 “An expansive history . . . with concise clarity, managing to capture the uniquely Greek identity throughout.”

Roderick Beaton, an Emeritus Professor at King’s College London, writes an expansive history of the Greeks from antiquity to the present day. He covers a lot of territory and does so with concise clarity, managing to capture the uniquely Greek identity throughout. For millenia, the Greek language serves as a guidepost for the unique accomplishments of this people. As Beaton explains in the preface:

“During that time, Greek was used at first to keep bureaucratic records, then to preserve for posterity the heroic epics, the Illiad and the Odyssey of Homer, that have been read with wonder by every generation since. It was the language of the world’s first fully alphabetic system of writing. It was in Greek that the foundations for modern philosophy and science were laid, and later that the apostles of Christianity would disseminate the new religion through the New Testament. The original Greek text of the Gospels is still read aloud in Orthodox churches around the world. Evolving as all human speech does over time, Greek in its present-day form is the official language of the Hellenic Republic and one of the two official languages of the Republic of Cyprus.”

This encapsulates well the main achievements of the Greek cultures. Beaton himself insists on the plural nature of this as he traces “the multiple ways in which Greeks have interacted with all manner of outsiders over more than three millennnia.” From the development of the alphabet to literature to forms of government to science to religion to art, the world has taken a lot of the treasures the Greeks have invented and expanded upon their gifts. The picture Beaton paints of ancient Greece will be familiar, but what he does exceptionally well is to describe how the Greeks continue as a culture through early Christianity and the Byzanine empire to the Enlightment and beyond. The chapters on the Ottoman Empire and Greek self-determination are especially interesting, a less well-known part of their history:

“For the first time in centuries, Greeks were ready to seize their political destiny and take their future into their own hands. During March and April 1821, all of the Danubian principalities, most of what is now mainland Greece, from Thessalonica in the north to the southern Peloponnese, and many towns and islands across the Aegean rose up in response to this call. Nothing on such a scale had ever happened before. The Ottoman state had been facing internal challenges to its authority for a number of years, not least from Muslim warlords in the Balkans. . . . But these had been essentially local upheaveals; none of which would have any lasting effect on the integrity of the Ottoman Empire. The Greek Revolution, as those proclamations show, was different—because it was never intended to be a matter for Greeks alone.”

In fact, men from all over Europe were drawn to fight for the Greek cause as an essentially noble mission. Among them was Lord Byron, who ended up dying there (though from disease, not fighting). The reason the Greek fight drew so much international attention was precisely because their culture had become synonymous with western civilization itself. Beaton explores the many ways Greek thinking and values have spread around the world (the reason this book is a “global history.”) He ends with present-day issues, the many refugees flooding Lesbos, the place Greece holds as a gateway to Europe. It’s a fitting image for the outsized influence the Greeks have had, so much bigger than the small slice of land they occupy.