The Greek and Roman Myths: A Guide to the Classical Stories 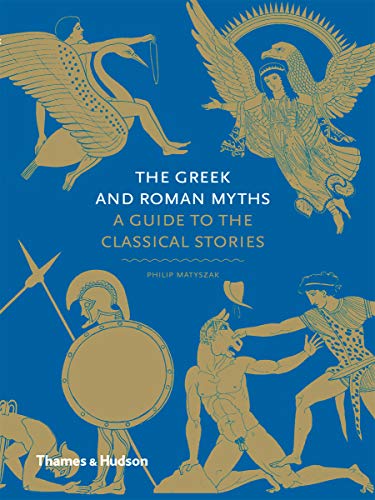 What are the Northern Lights? Why might a tornado demolish one house and leave another unscathed? Centuries of research and observation have provided answers to some stubborn enigmas, but what do we do when those answers are so seemingly inaccessible we can’t possibly begin to understand their origins to begin with? The most ethereal, most immeasurable response most likely rests upon faith or religion. Not so different from how the people of antiquity coped with external influences in their own lives.

The Greek And Roman Myths: A Guide to the Classical Stories is the erudite equivalent of having a field guide in your backpack when hiking or traveling in a foreign country. Philip Matyszak does a remarkable job in coalescing not one but two entire pantheons of gods and ancient myths into a compact, utterly enjoyable read. Through his work we can see the interaction Greeks and Romans had with their gods as a means to engender a rationale for both the natural and unnatural forces around them, to bring civility to a period that could be often barbaric and chaotic.

Homer (the Greek poet of antiquity, not Simpson) introduced many of us to these myths via his epic poems, the Iliad and the Odyssey. Matyszak has, in a contemporary sense, given us the means to more easily comprehend these myths and their widely varied casts so we may more fully appreciate just how ingrained they are in modern life.

Forget that these myths, gods, goddesses, titans, heroes date well before what historians and scholars consider the common era (B.C. E.); to this day their influence permeates our everyday lives, such is their power. Astronomers navigate the constellations when searching the heavens, using names like Leo, Perseus, Andromeda, Aries, Cassiopeia, and Pegasus; auto makers have given us the Saturn, the Orion, and the Cressida; almost every planet is named after a Roman God; Internet companies like Juno and Delphi; recording company Mercury hefts its name from the Greek god Hermes (using the Roman name Mercury); the goddess of victory, Nike, lends her name to the ubiquitous athletic clothing company; even Aetna, the child of Uranus and Gaia (the mother from whom all life comes—mother earth—lends her name to a mountain and an insurance company. Continents and days of the week bear the names—or at least derivatives of names—of ancient deities. The stories behind some of these names are fascinating and layer a colorful dynamic upon a nomenclature we all but take for granted.

Both the Greeks and—later—the Romans, believed their deities to be more immanent in nature than entirely within themselves. The author provides a host of snapshots that bring these stories into relief, fleshing out the anamorphic from the ethereal. The evolution of civilization suggests that centuries of polytheism slowly gave way to more prophet based, monotheistic cultures, and the deities of old became interpreted as symbolic of human nature. Matyszak provides plenty of grist for such an idea when presenting allegories like the Neoptolemus Principle (the harm one man does to another will always come back to him) and a Sisyphean Labor (any fruitless or endless task). Both have their basis in Greek lore, but have morphed into descriptions of concepts we now apply to our own time.

Far from being dry, The Greek And Roman Myths: A Guide to the Classical Stories is, frankly, a fun if legitimately educational romp through the mists of antiquity.

The subject matter is handled respectfully and with an underlying scholarly approach, but sans heaviness which some volumes imbue their study of the period with. The content is well structured and easily accessible, albeit abridged for brevity’s sake. The true meat-and-potatoes of these apologues are served for the reader’s considerations, but those desiring a more granular view of these myths may be disappointed; the book wasn’t intended to be a treatise on myriad facets each myth provides. Instead, it brings a greater scope of understanding without being too expansive in its approach. My reading of the Iliad back in high school would have been much more enjoyable had I had a guide such as this to refer to.

The complexity of Greek and Roman mythology is broken down into an easily palatable tapestry of the major plots and characters, providing a brief look at how many of the venerable narratives have influenced literature and art throughout history--a remarkably fun, illuminating read.

From Apollo to Zeus (Jupiter), Prometheus to Pandora, Hera (Juno) to Hades (Pluto)—all the interesting stars of Greek and Roman mythology are here and anyone with even the slightest curiosity about them will find a wealth of delights among these pages.