Greedy Bastards: How We Can Stop Corporate Communists, Banksters, and Other Vampires from Sucking America Dry 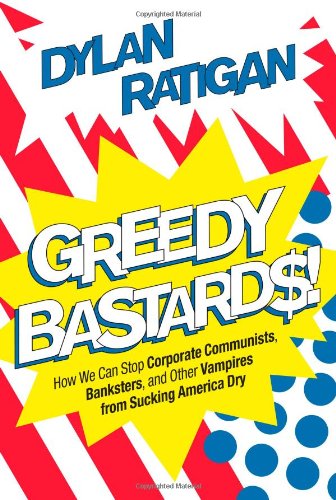 “. . . with a title paying tribute to vampires, this is a book you can sink your teeth into. . . . Floss will be useless for clearing out the debris.”

There is Glenn Beck, Bill O’Reilly, Keith Olberman, most of the evening lineup of MSNBC, and virtually every radio talk show host in America.

Dylan Ratigan, who once did a fair simulation of financial journalism on CNBC but then moved to MSNBC, is the latest gunslinger in Dodge. He well understands that to thrive in the AI, a man must become an industry unto himself.

Mr. Ratigan has seen Glenn Beck’s web channel; he understands ancillary product strategies as well as Sean Hannity (who has made near-manic holiday concert tributes to the armed forces his particular forte); and he watched Mark Levin’s Liberty and Tyranny dwell at the top of the New York Times bestseller list for months.

He said to himself, “I can get me summa that.”

And so he has.

Greedy Bastards: How We Can Stop Corporate Communists, Banksters and Other Vampires from Sucking America Dry is the consummate platform for a new entrant into the AI.

The book has been timed for publication with the grace of the heavens above as the Occupy Wall Street movement muddles its way across the media landscape. Indeed, Mr. Ratigan knows a demographic when he sees it. He is, in fact, been alleged to have provided pro bono media counsel to the OWS crowd.

Each big issue gets a rundown on what is wrong, unfair, outrageous, etc., etc., ad infinitum. The complaints are familiar to anyone with a passing acquaintance of a daily op-ed page.

Then Mr. Ratigan provides us his solution to each problem. There are nifty cartoon flowcharts illustrating the bromides for readers too impatient for prose. (I’m certainly one of those types.)

It is a remarkable piece of work, a kind of unified theory of every American gripe with an easy answer for each—free of any unintended consequences, downside or risk . . . kind of like Obamacare, collateral debt obligations, and Sarah Palin’s media empire.

There will, of course, be supercharged book tours supporting Greedy Bastards because Mr. Ratigan is a supercharged kind of guy. Still, every soul needs an angle; a true competitor in the AI must brand himself with a moment that’s truly defining.

For Keith Olberman, it was his stalwart May 14, 2008 “Address to President Bush on Iraq” (which you do remember, if you think really hard).

For Mr. Ratigan, it was a bilious, spouting two-minute TV rant reminiscent of the mad newsman Howard Beale in Paddy Chayefsky’s Network.

In fact, Beale is the model for all players in the AI—the first fictional character to inspire what is now a bedrock of our gross domestic product.

You might think I’m unfair to Mr. Ratigan. You are correct. I apologize.

If I have given the impression that Greedy Bastards is anything less than rigorous and well sourced, by way of penance I offer up Mr. Ratigan’s citations for the first two pages of his work:

As such, with a title paying tribute to vampires, this is a book you can sink your teeth into.

Floss will be useless for clearing out the debris.