Greatness in the Shadows: Larry Doby and the Integration of the American League 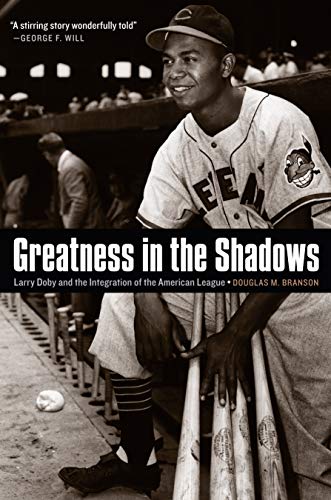 Douglas M. Branson’s book, Greatness in the Shadows: Larry Doby and the Integration of the American League, chronicles the career of the first African American baseball player to integrate the American League, shortly after Jackie Robinson broke the color barrier with the National League’s Brooklyn Dodgers in the summer of 1947.

More than a routine examination of the Cleveland Indians’ Larry Doby’s career, Branson attempts to explain why he believes there is such great disparity between how the history of baseball views Doby versus the overwhelming attention devoted to Robinson’s place as the man who became the first African American major league baseball player.

While acknowledging the second person to do anything historically significant is almost always relegated to the realms of the ignored, the author’s book explains there are other reasons he believes Doby’s breaking of the color barrier in the AL just eleven weeks after Robinson did it in the NL, has been ignored beyond him being the second person to achieve this.

He properly gives credit to Doby, the seven time All-Star and member of the Baseball Hall of Fame as a man who rightly deserves to be acknowledged on the same level as Robinson as Doby’s battle with the racial slurs and insults hurled at him were just as dire and intense as what Robinson experienced.

Doby was the front line pioneer who endured the same abuse Robinson endured since Doby was the first to experience it in many AL cities and ballparks where Robinson would never play.

In addition, Branson points out that Doby actually may have had a tougher road to travel during his inaugural year and the years to come compared to Robinson since Doby played with fewer African American ball players in the AL than Robinson did in the National League. Because of this fact, Doby became a more personal target for a longer period of time for the racial insults and threats. As Larry Doby put it himself, “Nobody said ‘We’re going to be nice to the second Black.’”

For the true baseball fan, it is all pretty interesting material as Branson also takes time to chronicle Doby’s statistical credentials that clearly prove Doby’s career adequately compares to many of the period’s best ball players and thus his “second-place status” wasn’t due to Doby being an inferior baseball talent.

Among some of the reasons Branson notes that Doby has been ignored by sports historians is that Robinson’s career was launched by Branch Rickey, one of baseball’s aristocracy members and owner of the Dodgers versus the more pedestrian persona of the Cleveland Indians owner Bill Veeck.

Cleveland sports fans will assuredly accept one of his other assumptions that Doby made his historic appearance in Cleveland, Ohio, which gets little love from sports writers compared to one of the big media markets like New York, Boston, or Chicago.

Branson also includes chapters on some of the day’s most popular players like Mickey Mantle, Joe DiMaggio, and Willie Mayes whose careers paralleled Doby’s and whose personalities overshadowed the quiet and reserved Doby as additional reasons why Doby has been slighted.

The only negative to the book is Branson’s habit of repeating anecdotes and statistics that he used in earlier chapters, which is annoying and detracts from the overall story.

Still, the book is an interesting sports read and Branson makes a strong case that Larry Doby, despite being the second man to integrate Major League Baseball, rightly deserves to be remembered and discussed with the same respect and reverence as Jackie Robinson as one of the true pioneers of integration in America’s Great Game.