The Greatest Knight: The Remarkable Life of William Marshal the Power Behind Five English Thrones 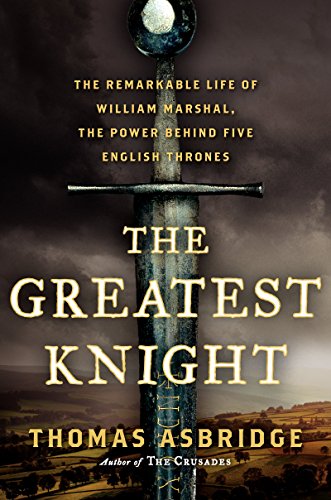 Thomas Asbridge begins this retelling of a great life of the Middle Ages with a less celebrated but still interesting tale. He writes of how great French antiquarian and scholar Paul Meyer first saw a manuscript in 1861 that two decades later he rediscovered, after years of searching, as the biography of English knight William Marshal. It was a poem in Latin commissioned by the great warrior's son and based in witness accounts.

This copy of a now-lost original told not only the story of a prominent Earl in the time of Richard the Lionheart but also of his whole world of medieval chivalry. The manuscript, once part of the famed private collections of the Philips family, has made a significant contribution to scholarship since its first publication by Meyer in 1891–1901.

This epic of 19,215 lines begins with Williams' father John, a typically ruthless member of the Norman gentry during the turbulent years of the civil war of King Stephen of England. Not the oldest son nor from the wealthiest most powerful aristocracy, William Marshal had to struggle to succeed in his world.

As a child, he was held hostage by the king. William of Tancarville, in Normandy, became his patron, and provided him the training and other resources to become a knight. Even then, however, he did not make the final cut to join the retinue of his lord.

Asbridge goes into great detail on the creation of a knight, including the great expense of appropriate mounts, "fundamental tools of the trade cost a small fortune to acquire and maintain." Even without the money for a replacement for the warhorse he lost in his first battle; however, Marshal triumphs as a success in the circuit of jousts.

He lived in a world of the 1100s where already the work of Geoffrey of Monmouth created the "abiding fascination with the stories of King Arthur and his knights" as well as the “Song of Roland” and the heroic ballads of chivalry.

Marshal was a player in a brutal world of complex, and sometimes fatal, class, political, ethnic, and family connections with more that we today could relate to in the modern mafia than to our government and society. Into this mix, religion, notoriety in tournaments, the Vatican, and the power of the Crusade also had roles.

Survival near the top in the epic-sized, constantly moving court (and its vast number of hangers on) of Henry II of England, the most powerful king in Europe, was struggle enough for anyone. Officially, the Angevin rulers answered to the king of France.

In fact, England and France were one nation in a dizzyingly complex series of civil wars, sometimes even within individual castles and courts. Brits, Celts, and Normans were peoples of everywhere in this world but who truly called nowhere home. It was a multi-dimensional chess game where the individual pieces could change sides at any time and courage, skill, and loyalty could trump fate.

It was also an epic soap opera that would make Henry VIII's reign and the Hundred Years War seem tame. Aquitaine passed to Richard the Lionheart through his descent from his mother, the famous Eleanor of Aquitaine who, before her divorce and marriage to the King of England, had been a warrior queen and Crusader of France. Even she used her sons to scheme, in her own right, against each other and against her husband, their father the senior king Henry II.

Richard's rule, that the author describes as brutal and notorious for its widespread raping, cried out for relief by the property-less Henry the junior co-regent of England. With William Marshal at his side, Henry the younger finds success in battle against brother Richard and the promise of a greater glory, only for it to become public knowledge that William Marshal is sleeping with his wife and that there’s a huge conspiracy within his own ranks to destroy Marshal. At the same time, Henry II joined Richard, but the younger king dies from natural causes, having made up with Marshal.

The Greatest Knight, approaching forty but with nothing but his fame, then went to the Holy Land on Crusade in honor of Henry the younger, just as the Kingdom of Jerusalem prepares for a final onslaught. He returns to Europe in time to avoid that disaster and achieves property and rank as a courtier under Henry III in the old king's last years.

Marshal survived betrayal by both the ruthless King Philip Augustus of France and the incompetent King John of England. He had fought to regain Angevin lands in France, first under Eleanor and John but then under Richard, only to see the same lost under John in the first rise and fall of English ambitions in medieval France.

In an age when people were typically dead by age thirty, Marshal began a new life at sixty by expanding his significant holdings in Wales and his vast tracts in the first English colonization of Ireland. Conquest and control of the new lands was made as much by marriage and genealogy as by the sword. Ten years later, he negotiated the Magna Carta and led troops in battle as regent for the boy King Henry III in driving out a French invasion and ending a civil war of the English barons.

It may not have been so good to be king. All five of the crowned kings of England he served "suffered tortured, or sudden, deaths," but political reality in the days of knights in shining armor cannot be beat for adventure, finding meaning about power, or just as a good read.

Even this kind of history can make for poor prose and a dull book in the wrong hands. This story, however, has never been told by a better or more knowledgeable writer than with Thomas Asbridge in The Greatest Knight.

A good read takes you to another world and this one does so much more because it is good storytelling built on solid scholarship—a great life that was really lived.