The Greatest Fury: The Battle of New Orleans and the Rebirth of America 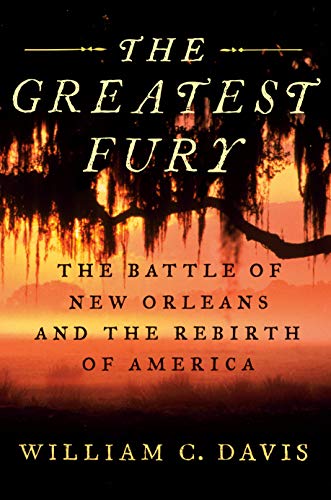 "Davis . . . seamlessly blends the immediate events and the background to tell history not well known."

Professor William C. Davis has a deserved reputation for exciting reads for general audiences that brin alive the past. He also quietly explains the relevance of that history. In The Greatest Fury, Davis tells the story of the Battle of New Orleans that gave America respect as a nation, a major victory, a future president, a national holiday for many years, and almost our national anthem.

"The first truly American Army," "of multiple nationalities white, black, and red, Regulars, volunteers, drafted men, soldiers, sailors and marines, even stateless smugglers and privateers," won one of history's greatest victories. Amid bayonets, cannons, cotton bales, muskets, and rockets, the men of the two armies fought with a savagery that marked the War of 1812 and from which the book takes its title.

The book begins with the experience of the city of New Orleans. Then and now it assaults "the senses with friendly weapons" of color, smell, sound, and taste. "Broad-clothed and beaver-hatted gentlemen . . . aproned merchants . . . buck-skinned upriver backwoods men . . . ladies in Parisian fashion . . . and Choctaw women in deerskin and gingham" shared the streets.

Invasion and slave revolt had recent historical precedents in Louisiana. Conspiracies whirled in its coffee shops by the infamous Aaron Burr, "legendary Reuben Kemper," and James Workman. James Wilkinson, sent by Jefferson "to secure the city against future plots," also worked as "a paid Spanish spy and an American General."

A threat before America acquired it in 1804, this great cosmopolitan city at the mouth of the Mississippi served as the gateway "for more than one-third of the nation's produce." When the Royal Navy blockaded the city in late 1814, New Orleans held "$14 million in cotton" and "more than $1 million worth of sugar." Vice Admiral Sir Alexander F. I. Cochrane personally needed to conquer the city, if only for his share of the prize money.

Despite the city's huge economic and strategic value, the population, one official wrote that he "feared only a British Invasion could rouse them." General Andrew Jackson heard "how they would flee at sight of the enemy." The national government withdrew some of the army and what remained served "under-manned, untrained, and short thousands of muskets," while the politically fractured "legislature still resisted summoning militia."

That incursion came on December 13, 1814, the day that an American force of small boats saw the arrival of an overwhelmingly larger British army and fleet approaching the city. They came to divert American forces so that "His Majesty's hold in Canada would be more secure." Late in the war, British planners saw the "withdrawal of" "the interior states like Tennessee, Kentucky, even Ohio," if New Orleans fell and perhaps in time to "move the army into Georgia and South Carolina."

Andrew Jackson took charge, under questionable legal authority, of "a powder keg with multiple sputtering fuses: a divided population, want of confidence in the civil authorities, a potential threat from the Creeks, geographic isolation, a slave population with a history of slave revolts, and more." In this multi-racial, multi-ethnical city in 1814, "language defined politics and loyalties."

Davis explains, however, "taking and keeping New Orleans or Louisiana presented too many problems," principally from overwhelming American efforts to take it back and "with the region's 100,000 slaves." "Few [among the British] who presented plans for taking New Orleans considered what would come afterwards." British and American leaders at that time, however, signed a treaty that did not specify the fate of New Orleans.

With the threat of the British arrival, the American militia ranks filled, and the city had "thirty-seven cannons with more than thirty tons of powder, several thousand muskets, and tens of thousands of rounds of ammunition," in addition to reinforcements from the regular army under Jackson. "Nearly three months of leaks [from British sources] made further pretense of secrecy pointless."

Fighting began in the darkness of December 23, 1814 and only ended after Jackson's success on January 8, 1815. Battle sequences in the book involve battles fought on bayous, canals, ditches, levees, and mud in darkness, fog, light, and smoke. "The temperature had dropped to freezing or below."

"The din of cannon and musketry, cries of the wounded, and the sight of comrades mangled before their eyes." "Friends fired on friends" "and units from both sides jumbled in blind melee." British losses included the two major generals leading the final assaults.

Davis, however, seamlessly blends the immediate events and the background to tell history not well known. He includes in this flow of information, for example, the odyssey of the Kentucky reinforcements, the problems with trans-Atlantic communications, and the importance of the artillery.

The annotation and bibliography of The Greatest Fury shows the depth of Davis' research. The author draws the campaign in detail, including the battles on land and sea, as well as the roles of the famous and forgotten.