The Greatest Empire: A Life of Seneca 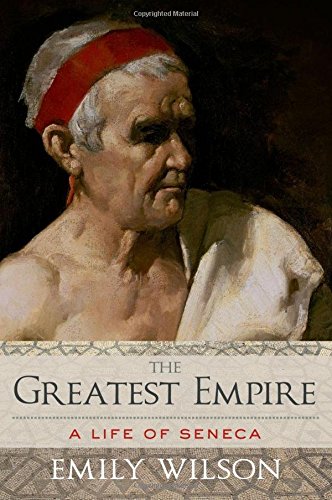 One of the great pities of our time is that we live in a golden age of readable but also solid academic credible studies of Roman and Medieval history for a popular audience. Such works include, among others, Frank McLynn’s Marcus Aurelius: a Life and Anthony Everitt’s Hadrian and the Triumph of Rome.

Our Roman golden age, however, comes at a time of declining interest in everything of the ancient world except seemingly such depravity as gladiators and the Black Death. Scholar Emily Wilson, associate professor of Classical Studies at the University of Pennsylvania, writes such works.

Professor Wilson now offers a biography of Seneca, the Roman philosopher who prospered under the notorious Caligula, was exiled by Claudius, and became the indispensable speechwriter for the controversial Nero. “One of the most humane voices in one of the most inhumane of historical periods,” Wilson writes, this philosopher argues for not serving anyone whom you despise and for avoiding ambition to protect oneself from fickle fate. He denounced wealth and also the immorality of the area. On the other hand, he also asked “show me who is not a slave!”

Seneca today in public history is hardly more than a name. In this work, the reader receives an intimate view of one of the great intellects of the classical world who championed the ideals of not just seeing the universe from outside out but rather to see oneself as the universe from within looking out, the great turning point between the ancient World and the Modern. In that regard, Seneca belonged to a time much later than that in which he lived and died. From that revolutionary view, all that we have gained since his time has come.

Wilson goes even further, however, placing Seneca as an example of the common way that an extraordinary figure could rise in Roman society from relatively modest beginnings. In popular history, Rome had its own one percent and a huge culture of poverty for everyone else. Class, however, is never that simple or straight forward. While Rome did not have what we recognize as a middle class, it did have a complicated class arrangement that did allow for some social mobility by roughly eight percent of the population above the poverty level but not born to the aristocracy.

The author describes that world accurately and without oversimplification. She achieves this difficult end with skillful writing and from a thorough knowledge of the early Empire and the significant material in what survives in Seneca's extensive writings. The reader is introduced to the basics of Greek philosophy without too much detail or any digression.

Wilson has to answer questions of how her subject argued against the value of wealth but died rich. As she explains using Seneca’s essay on the Trojan Women, “Ulysses the clever strategist who is willing to say or do anything to please the king, win the war, and go home loaded with trophies and wealth begins to look rather like his creator Seneca.”

The greater point being that just as Ulysses then subsequently suffers repeatedly for his personal failings in the Odyssey, so too does Seneca in striving for his ambitions. He certainly had reason to question the evils of success but especially as he often played the very kind of political games that he questioned to achieve the prestige that he also claimed to disdain. As the tutor of Nero, he rose with his student to become the emperor's indispensable ghost writer. As Wilson writes “Nero was apparently pleased with his work as major spokesman for the ideology of his regime.”

Seneca's universe was in conflict between his revisionist Stoic philosophy and the very temptations he denounced. He could not live as a stoic, accepting each day as it comes while accepting his fate. Not allowed to retire from a situation he increasingly found untenable; however, Seneca joins in a plot against his mater and is sentenced to committing suicide, what proves to be a drawn out effort before he finally perishes from steam. Losing his final argument on fame with himself, he became the object lesson of his own parable.