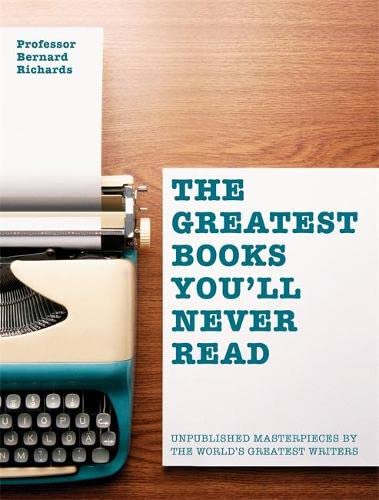 Libraries, books, writing, and writers as subjects are fascinating, even collectively. They can be histories and parts of stories of high adventure, made even more exciting when the reader can visit the real places such as the reading rooms of the British Library, the Library of Congress, and the New York Public and there admire the discoveries made by great minds that visited such institutions in the past. Knowledge is power and the above are the keys to information.

This volume of essays by various writers and compiled by Professor Bernard Richards is the answer to the question of a present for your bibliophile friends on your gift list. It is a thoroughly researched, engrossingly written, and lavishly illustrated collection of histories of the greatest library no one can ever enter: that of the lost and the damned in literature.

Overall, these essays are a collection of ghost stories of ambitions, dreams, failed plans, and even completed work that likely will never appear on Amazon at any price; as the author writes, “a whole host of finished works that are unfinished, unbegun, or lost, and today exist only as suggestive fragments or not at all.” Conversely, works such as Virgil’s Aeneid and Chaucer’s Canterbury Tales are lost because they may be as finished as their respective authors ever intended for them to be. Karl Marx’s early manuscript whimsical comedy Skorpion und Felix could yet see print.

The Greatest Books is also a valuable reference book for the popular literature of writers like Matthew Pearl who create stories around the histories of works as Charles Dickens’ never completed The Mystery of Edmund Drood or Shakespeare’s performed but now lost play Cardenio. Graham Greene’s The Empty Chair, according to George Lewis, is “a mystery that has not given up all of its secrets” including when the executors of Greene’s estate will not allow its complete publication.

The list of writers is extensive, international, and timely. It even includes mention of Harper Lee’s Go Set a Watchman in an account of two novels Lee started but surely will never write. The stature and output of writers such as Edgar Allen Poe and Mark Twain was such that as George Lewis writes of the famous lost early manuscripts of Ernest Hemingway, “there is no need to rue the loss to the portrait of the artist.”

My old sergeant claimed that in each of us could be found the great American novel if only our stories had great writers to tell our lives. In this work, the opposite problem prevails. These writers are among the giants of literature even when sometimes also among the unappreciated yet they usually have at least one more story to tell but one never told. While that last chapter, ending, poem, or manuscript did not make it to print, or eventually the bargain bin at your favorite used bookstore, they did create fascinating and fun tales of why they did not happen.

Professor Richards divides these concise essays by period. The different contributors explain the evidence for how far each author went with an idea as well as likely reasons the final product does not exist. Curiously, in this most interesting of books, the names of the writers of these usually two-page essays appear as abbreviations only deciphered on page 247, practically the last page of the book.