The Great War and the Birth of Modern Medicine 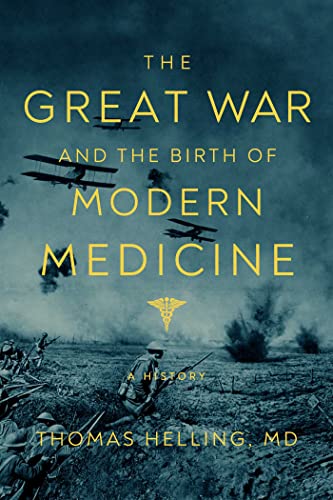 “The Great War and the Birth of Modern Medicine could stand as a solid highly readable history of World War I, even ignoring its important contribution to the history of the advancement of medicine.”

The debt owed by modern medicine to World War II has received acknowledgement but not so much that of the First World War. Physician Thomas Helling in The Great War and the Birth of Modern Medicine, however, argues that “the Great War could be looked upon as the Father of Modern Medicine.”NY Journal of Books review of

“Chemists and physicians and doctors and technology and compassion united in one grand effort to propel medicine into a modern age.” Yet Helling also asks “can we ever justify the costs?” “in a bizarre balance sheet of bereavements and benefits.”

“Before the slaughters began, war was seen as a glorious adventure.” “The clean bullet wounds of a generation earlier gave way to mutilating excavations of limbs from high-energy rounds and artillery shell fragments.” Men “maimed and mutilated by new powerful munitions of destruction” gave opportunity to “white-coated researchers to explore the nuances of physiology disrupted to the utmost” in an era of a medical profession able to explore and learn.

Investigating the pathology of strange new maladies, such as the French farm soil made dangerous by life in the trenches, became a developing science in itself. “Diseases now had causes, not just upset humors or deranged ethers.” The microscope, the Röntgen’s machine, and the scalpel became the tools to save lives then and from then on.

French and the German military medicine began World War I with a philosophy of keeping their surgical facilities away from the front lines. “The sheer efficiency of well-positioned machine gun fire and the hailstorm of falling artillery shells” changed those ideas especially beginning with the industrial scale slaughter at Verdun.

Wounds needed treatment as close to the new battlefields as practical and under sanitary conditions, but especially with waves of mass casualties. The mobile surgical unit and the motorized ambulance came into being but not without resistance from the French military medical establishment.

“Necessity catalyzed other achievements.”  “Governments and private enterprises,” helped doctors, often “literally under the gun” “to figure it all out and make monumental changes in the management of mass casualties, blood loss, tissue damage and wound infection.”

Always, the author humanizes the now largely forgotten medical professionals who, in the “dizzying brutality” of this new kind of war, achieved so much of lasting importance. Dr. Bruce Robertson, for example, “a man of gentle sentiments” “could restore hemorrhaging men, but his own emotional hemoglobin leaked unchecked.” “Harvey Cushing was the consummate surgeon-scientist and the consummate educator.”

Helling has the rare combination of medical knowledge and the ability to do historical scholarship, combined with engrossing storytelling that never loses the reader or the historical narrative. It is from beginning to end a thought-provoking book relevant for all times.

The Great War and the Birth of Modern Medicine could stand as a solid highly readable history of World War I, even if ignoring its important contribution to the history of the advancement of medicine. Helling’s narrative tells the advances within the context of the war, beginning with the ghastly incompetence of the Franco-Prussian War, although the experiences of American Civil War and the Crimean War taught valuable lessons.

The book ends with a chapter on what came from the war. The Great War and the Birth of Modern Medicine has an extensive annotation and a bibliography. It also has photographs.