The Great Secret: The Classified World War II Disaster that Launched the War on Cancer 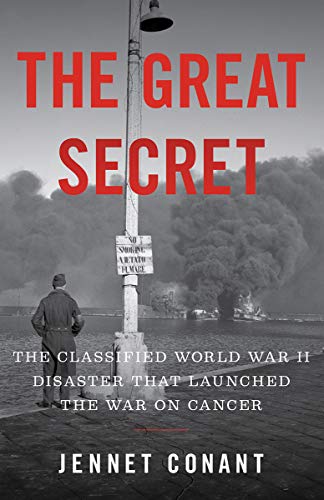 Official denial never goes out of style. In our own time, an Iraqi spokesman famously declared: "There are no American infidels in Baghdad. Never!" In historian Jennet Conant’s splendid The Great Secret, a British officer in the Allied-held Italian city of Bari in World War II, insists with a straight face: “Mustard? That’s impossible. There’s no mustard here.”

The mustard in question was mustard gas. Some 540 tons of mustard gas bombs had just blown up in the strategic port city’s harbor, claiming more than 1,000 casualties during a Nazi air raid. But German warplanes had not dropped the lethal bombs, much as the Allies feared they might one day. The truth about that devastating night, December 2, 1942, later dubbed “a little Pearl Harbor” (the attack sank 17 Allied ships), would not become known for nearly three decades.

When Lt. Col. Stuart Alexander, a doctor and chemical weapons specialist posted to Bari, saw that terrible night’s casualties, he knew something was wrong. Hospitalized with unusual burns, wounded soldiers failed to respond to standard resuscitation measures. They complained about intense heat, tore off their gowns, and demanded water. Before long, most who had been immersed in the oily harbor water had red, inflamed skin, developed large blisters, and entered a “startling downward spiral.” They soon died.

The author does a fine job depicting Alexander’s intense determination to learn the reason for the unexpected deaths. In some way, he suspected, the men had been exposed to mustard gas. Although the use of chemical and biological weapons had been banned by the 1925 Geneva Protocol, their possession was still permitted. It was well known that both the Germans and the Allies had been secretly stockpiling chemical munitions.

Could the ships in the harbor have been carrying mustard gas?

British authorities in charge of the port denied the allegation. That did not stop Alexander from conducting a careful investigation. Even after a diver discovered fractured American gas shells at the bottom of the harbor, British officials—including Churchill—insisted repeatedly mustard gas was not involved. So did U.S. authorities.

For security reasons, a veil of Allied secrecy descended.

Doctors in Bari never received information that might have saved lives. Medical charts were altered to eliminate mention of mustard gas. The world would learn years later that the John Harvey, a merchant ship, had carried a huge supply of hundred-pound mustard gas bombs, for use, if needed, to retaliate against an enemy chemical attack. Exploding ammunition ships had set off a maelstrom, mixing mustard with oily water. Casualties, wrapped in blankets, stewed at length in the lethal concoction.

The story might have ended there. But Alexander wondered whether the mustard, which suppressed white blood cells, might not also slow the rate of division of cancer cells. Enter Col. Cornelius “Dusty” Rhoads, a physician and research scientist. He read Alexander’s classified report on the Bari casualties and realized the deadly chemical held great promise for cancer treatment.

As head of the Sloan Kettering Institute for Cancer Research, founded in 1945, Rhoads would become famous as a leader of the war on cancer. Shepherding the “amazing transformation of nitrogen mustard from virulent poison to potent drug,” as Time magazine put it, he and others gave rise to chemotherapy, a new and controversial cancer treatment.

Conant segues nicely into the introduction of chemo amid the medical rivalries and cancer-treatment complexities of the past-war era. Rhoads proved an ambitious, hard-working researcher. By the late 1960s, chemotherapy had entered its “golden age,” with a proven ability to eradicate some cancers. Rhoads said “it should forever remain part of the medical canon that chemotherapy owed a debt to the dead of Bari.”

From tragedy to triumph, The Great Secret traces these extraordinary wartime and medical events with a grace and authority certain to please readers.