The Great Pretender: The Undercover Mission That Changed Our Understanding of Madness 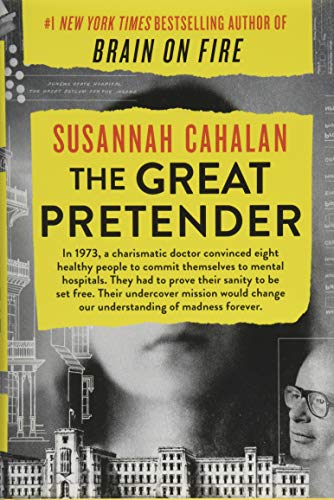 “Cahalan’s research is dogged and her narrative riveting, leading us from red herring to clue and back with the dexterity of the best mystery novelists. Then she builds her case like a skilled prosecuting attorney.”

Stanford University Professor of Psychology and Law David Rosenhan (1929–2012) may not claim as much name recognition as Sigmund Freud, but he arguably influenced psychiatric practice in the United States more than any other human being.

In 1973, the Columbia-trained Rosenhan published an article in Science, “On being sane in insane places" that called into question the very fundamentals of practice and classification in the field. The article described a study in which healthy “pseudopatients” had faked their way into psychiatric hospitals on the basis of claiming auditory hallucinations of the words “empty,” “hollow,” and “thud.” All eight of these individuals were diagnosed with serious psychiatric illnesses, the vast majority labeled as suffering from schizophrenia “in remission.” They reportedly remained hospitalized for between seven and fifty-two days, enduring various degrees of stress and poor treatment. Rosenhan’s conclusion: Medical professionals were unable to distinguish sanity from insanity. He went further: “Perhaps hospitals cure, but psychiatric hospitals don’t. They brutalize, they torture: they are outside the pale; they make the sick sicker, and even the sturdiest, sick.”

The study fit neatly into the emerging anti-psychiatry narrative of the era. In the early 1960s, critics including sociologist Erving Goffman and psychiatrists R. D. Laing and Thomas Szasz had launched a series of broadsides against a field whose cures included insulin-coma therapy and frontal lobotomies. Ken Kesey’s One Flew Over the Cuckoo’s Nest (1962) and the subsequent Miloš Forman film of 1975 brought the “evils of psychiatry” into mainstream popular culture. In an era of questioning authority, large scale public institutions that warehoused patients like inmates and denied them basic freedoms became easy targets. The Rosenhan experiment proved ideal artillery for these attacks.

Rosenhan’s work had two drastic consequences. The first was to add impetus to the deinstitutionalization of the seriously mentally ill that had begun under President Kennedy. Ninety percent fewer psychiatric beds are available today than in 1963. Even extremely ill patients now often have difficulty garnering admission to psychiatric hospitals. The second was the radical revision of the Diagnostic and Statistical Manual of Mental Disorders (DSM)—the field’s Bible when it comes to classification—that moved modern psychiatry away from its psychodynamic roots toward a rigid compendium of diseases based upon the enumeration of symptoms.

In short, Rosenhan’s research proved truly revolutionary. Only it didn’t happen—at least, not remotely in the way Rosenhan described in his seminal paper and subsequent book manuscript. In a deeply researched and daring revisionist history, The Great Pretender, Susannah Cahalan takes apart Rosenhan’s work as though disassembling a jigsaw puzzle. By the conclusion of the narrative, one wonders whether Rosenhan did anything that could meaningfully be described as research at all.

Cahalan was only able to locate two of Rosenhan’s patients. One, Bill Underwood, recounted an experience inconsistent with the data Rosenhan reported. Another, Harry Lando, was excluded from the study entirely—his very existence relegated to a footnote on flimsy grounds—seemingly because his inpatient stay proved a positive experience. Of the other patients, there is simply no historical record.

A former colleague and friend of the researcher, Swarthmore professor Kenneth Gergen, describes Rosenhan as “a bullshitter.” He tells Cahalan: “If you’ve [only] got one or two examples of things that really happened as they are written in the paper, then let’s assume most of the rest was made up.”

Cahalan is no stranger to the shortcomings of psychiatry. Her bestselling memoir, Brain on Fire: My Month of Madness (2012) recounts her own serious psychotic illness, during which she fell victim to multiple misdiagnoses, including that of schizoaffective disorder; she was ultimately found to suffer from a rare neurological phenomenon, anti-NMDA receptor encephalitis, and made a full recovery. However, the episode has clearly transformed the longtime New York Post journalist. In The Great Pretender, she writes of encountering another anti-NMDA receptor encephalitis patient who was not as fortune as she in receiving a correct diagnosis until it was too late, and is now likely to suffer indefinite impairment. For Cahalan, the validity of psychiatric diagnoses is not just abstract science, it is highly personal.

But The Great Pretender is about far more than one researcher—however prominent—and the influence of his misconduct. Cahalan places his story in the context of a much larger crisis in the field, a veritable unraveling. In 2011, a leading Dutch social psychologist, Diederick Stapel, was discovered to have fabricated data—often whole cloth—in more than 50 papers, including the widely read study reporting a connection between poor railroad station hygiene and racism. Since that time, the field has been in freefall.

Bryan Nosek of the University of Virginia has demonstrated that a majority of the field’s 100 leading studies cannot be reproduced or confirmed. Additional evidence has called into question both Stanley Milgram’s obedience experiment and Philip Zimbardo’s Stanford Prison Experiment. In a 2015 op-ed, a Lancet editor cited by Cahalan noted that half of all scientific literature may be untrue.

Cahalan offers us valuable insights into how one such fraudster perpetrates his con—his choice to publish in a generalist journal, for instance, to avoid the scrutiny of experts in his own field. What remains unclear is the why? Her book forces us to ask questions far beyond those related to psychiatric diagnosis: Why is scientific fraud now as much the rule as the exception? What has happened to our culture that fame has supplanted truth as a research goal? And, most important, what can be done to halt this slide?

Cahalan’s research is dogged and her narrative riveting, leading us from red herring to clue and back with the dexterity of the best mystery novelists. Then she builds her case like a skilled prosecuting attorney.

Yet in the end, her verdict is somewhat tempered. She writes: “Unlike Rosenhan, I don’t want to ‘invent knowledge’ where it’s lacking. The truth is I simply don’t know so much.” She describes the study as “flawed” rather than fabricated—refusing to weigh in on whether the missing six pseudopatients exist at all. But like Peter Falk as the television detective, Columbo, one senses she is asking questions to which deep down she now already knows the answers. Sometimes, in spite of the overwhelming evidence, it can be hard to voice a final diagnosis.