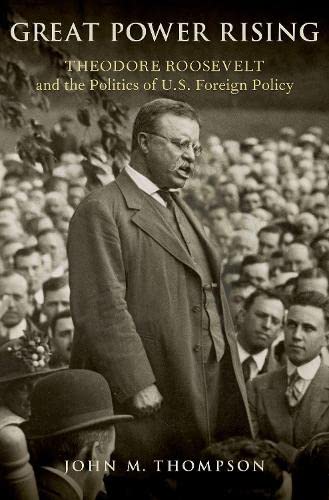 “Thompson shows that throughout his presidency, Roosevelt worked assiduously to overcome the restraints of domestic politics on his foreign policies by using his ‘bully pulpit’ and cultivating the press to shape public opinion.”

Theodore Roosevelt is one of the few American presidents admired across the political spectrum. Throughout his eventful political life, Roosevelt appealed to progressives with his trust-busting, environmental conservation, and social reforms; to conservatives with his robust approach to national defense and unabashed Americanism; and to liberal internationalists with his expansive view of America’s role in the world.

Roosevelt has been called America’s first “modern” president, perhaps because he ascended to the presidency as the United States was becoming a global power. The U.S. had obtained an overseas empire as a result of its decisive victory in the Spanish-American War. It had economic interests in Asia as a result of the “Open Door” understandings with European powers. Its annexation of Hawaii had made it a Pacific power.

John M. Thompson of Zurich’s Center for Security Studies has written a small book analyzing how domestic politics and public opinion influenced Roosevelt’s approach to foreign policy. Thompson shows that Roosevelt as president was both a consumer and shaper of public opinion, and paid close attention to domestic politics when formulating and implementing his foreign policy.

As Henry Kissinger among others has repeatedly pointed out, foreign policy can never be wholly divorced from domestic politics, especially in a democracy. Under the United States Constitution, as Thompson notes, the president is afforded broad and mostly undefined powers in foreign affairs, but domestic politics act as a restraint on presidential power.

Thompson shows that throughout his presidency, Roosevelt worked assiduously to overcome the restraints of domestic politics on his foreign policies by using his “bully pulpit” and cultivating the press to shape public opinion. Roosevelt’s approach to international issues, writes Thompson, was “governed by a combination of his own preferences and the push and pull of politics.”

The author uses case studies to demonstrate Roosevelt’s foreign policy modus operandi. In the Venezuela crisis of 1902, the president deftly straddled the issue of how strictly to enforce the Monroe Doctrine against European (in this case, German) intervention in the Western Hemisphere. While domestic political concerns demanded that he invoke the Doctrine, he downplayed the German threat so as to prevent the crisis from getting out of hand and leading to war, which also had the side benefit of not alienating the German-American vote.

In the debate over where to dig the Central American canal, the president shifted the site from Nicaragua to Panama (then part of Colombia) for both strategic and domestic political reasons. He also, untruthfully, disavowed any involvement in supporting Panamanian secessionists in response to domestic criticism. Roosevelt also effectively shaped public opinion to secure Senate ratification of the Hay-Bunau-Varilla Treaty that established the U.S. Panama Canal Zone.

The Panama success, Thompson notes, “underscored the extent to which international politics had emerged as an advantage in Roosevelt’s bid to retain the presidency.”

Events in the Dominican Republic in 1904 led to the Roosevelt Corollary to the Monroe Doctrine. Thompson notes that the president had been formulating an expanded version of the Monroe Doctrine since early 1903. He used the insurgency in the Dominican Republic to persuade public opinion that America must play a role in preventing political instability in the Western Hemisphere.

Roosevelt paved the way for this policy change by “launching a series of trial balloons in prominent journals” and appealing to public outrage at the threat to American lives and property. But he cautiously stopped short of direct, long-term military intervention, in part because of his gauge of public opinion in an election year.

The president later reflected on these events by remarking that he “had to exercise the greatest care in order to keep public opinion here with me so as to make my [policy] successful.” The only way he could maintain public support, the president said, was “by minimizing my interference and showing the clearest necessity for it.” Roosevelt demonstrated his belief, Thompson writes, that “astute leadership, combined with an informed public, was essential to effective governance.”

Another area where domestic politics affected Roosevelt’s foreign policy was immigration, especially from China and Japan. Though Roosevelt believed in immigration reform that would ease restrictions on Chinese and Japanese immigrants, for political reasons he sided with exclusionists, especially labor unions, to limit the influx of Asian immigrants. This negatively affected U.S. relations with China and Japan.

Roosevelt understood that Japan was a rising Pacific power whose interests could someday clash with the United States. He sought to improve relations with Japan, but also to build-up American naval power in the Pacific. Here again, the president, in Thompson’s words, “sought to balance concessions to public opinion with his convictions.” He believed in leading public opinion when necessary, but usually exercised prudent realism when confronted with sufficient domestic political opposition.

Shortly after winning reelection in 1904, Roosevelt declared that he would not run for reelection in 1908. This made him an instant lame duck, and Thompson suggests that this early declaration was a political mistake that weakened his presidency. Roosevelt supported his friend and key advisor William Howard Taft in 1908, but soon became disillusioned with Taft’s leadership. In truth, as Thompson points out, Roosevelt missed being president and hungered to reenter the political arena.

He did so in 1912, when after losing the Republican nomination to Taft, he formed a third party—the Progressive or “Bull Moose” Party—and split the GOP vote, assuring the election of Democrat Woodrow Wilson.

After World War I broke out in Europe, Roosevelt wanted the U.S. to aid Britain and eventually become a belligerent. Roosevelt, as a friend and admirer of Alfred Thayer Mahan, Brooks Adams, and Henry Cabot Lodge, understood geopolitics and that America’s security depended on the balance of power in Europe and Asia.

Wilson proclaimed U.S. neutrality and this infuriated Roosevelt. The former president proposed an increase in U.S. naval forces and overall military power, including support for conscription. He hoped that the GOP would turn to him to challenge Wilson in 1916, but Republicans nominated former Supreme Court Justice Charles Evans Hughes who lost a close election to Wilson. Out of power, Roosevelt failed to shape public opinion in favor of war.

Thompson notes that during the war, Roosevelt proposed creating a “League of Peace,” long before Wilson suggested the creation of a League of Nations. Thompson implies that Roosevelt and Wilson shared the same vision for such a League, but it is far more likely that Roosevelt’s League would have been similar to an alliance of like-minded powers than the utopian institution envisioned by Wilson.

Roosevelt was a fierce critic of Wilson and his foreign policy, and sought unsuccessfully to sway public opinion against him. Thompson, who appears to admire both Wilson and Roosevelt, deems Roosevelt’s dislike of Wilson “extreme and unreasonable.”

In the end, however, Theodore Roosevelt was the more successful foreign policy president in part because, as Thompson notes, “he understood and took advantage of the ways the international and domestic aspects of foreign policy overlap in the U.S. system.”