The Great Partnership: Robert E. Lee, Stonewall Jackson, and the Fate of the Confederacy 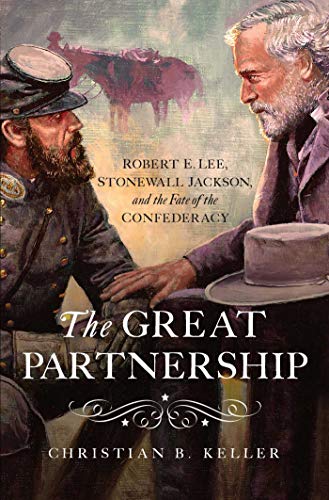 “Christian Keller has proven once again that we can still learn much from the history of the American Civil War. The Great Partnership is a thought-provoking book on leadership relations based on the mostly successful partnership of Robert E. Lee and Stonewall Jackson.”

Robert E. Lee and Thomas “Stonewall” Jackson are probably the two most revered figures in the history of the Confederate States of America. Their military prowess and courage are undisputed. They were great generals but also made their share of mistakes in waging war against the Union during the Civil War.

From June 1862 to May 1863, Lee and Jackson formed what Christian B. Keller calls a “great partnership” that carried the Army of Northern Virginia to victory after victory in the Eastern theater of the war against the Army of the Potomac. The partnership ended at the close of the Battle of Chancellorsville when Jackson was wounded by friendly fire and shortly thereafter succumbed to pneumonia.

Keller is the Dwight D. Eisenhower Chair of National Security and Professor of History and Strategy at the U.S. Army War College in Carlisle, Pennsylvania. That is one of the schools where the Army’s future leaders are trained to be strategists and leaders. The Great Partnership is a book about military history, but the author’s purpose is to impart lessons in “leader relationships, how they are created and ideally function, and how devastating it can be when they disintegrate.”

The Lee-Jackson partnership began during the Seven Days Battles that were fought in the vicinity of Richmond, Virginia, June 25–July 1, 1862. There, Lee, new to command of the Army of Northern Virginia, parried Union General George McClellan’s efforts to seize the Confederate capital in a series of battles fought near the Chickahominy River.

In protecting Richmond, Lee demonstrated the audacity for which he later became famous. The new commander, Keller writes, “pushed the Federals halfway down the Virginia Peninsula to Harrison’s Landing,” despite being outnumbered by Union forces. It was a “turning point in the war,” Keller continues, “that wrested the strategic initiative in the Eastern Theater away from the enemy and conferred it upon Lee and the Army of Northern Virginia.”

But even greater opportunities were missed, in part because of Jackson. The Seven Days was not Jackson’s finest hour. He arrived late at several of the battles and sometimes in the wrong place. He was sleep-deprived and unfamiliar with the ground, he and his men were exhausted from long marches and oppressive heat and humidity, and Federal cavalry repeatedly harassed his forces.

Keller believes that Lee could have “demolish[ed]” McClellan’s army at Glendale and achieved a strategic victory, but Jackson’s “lethargy” and other factors prevented a Confederate rout. Later, at Malvern Hill, it was Lee who erred in launching repeated attacks on a well-fortified Union position—something he would repeat on the third day at Gettysburg.

The partnership blossomed with the victory at Second Manassas in late August 1862. Lee and Jackson, Keller notes, were of one mind in believing that it was essential to shift the fighting away from Richmond and closer to Washington, D.C. and other northern cities. Both understood that because Union resources dwarfed those of the Confederacy a decisive victory over Union forces in the north could result in a political settlement favorable to their cause.

In September 1862, Lee began the Sharpsburg (or Maryland) campaign, where Jackson won a stunning victory at Harper’s Ferry (involving the largest surrender of U.S. troops until Corregidor in World War II), but where the Army of Northern Virginia was stymied at the bloody battle near Antietam Creek on September 17. It remains the bloodiest day in American history.

Keller points out that Lee’s trust in Jackson grew after Second Manassas and Harper’s Ferry; he increasingly sought Jackson’s counsel. “The two leaders,” he writes, “were together multiple times each week for reasons both personal and professional, their staffs intermingled constantly and fostered their own camaraderie.”

The two generals’ shared strategic outlook was complemented by their shared religious beliefs. Keller spends a lot of ink discussing the religious beliefs of both generals and their shared desire to awaken or reawaken the Christian faith of their soldiers. Lee and Jackson believed in divine providence—that God “controlled everything and determined their own personal fate, that of the army, and of the Confederacy.”

The next two major battles manifested what Keller calls the “perfection” of the Lee-Jackson partnership. At Fredericksburg in December 1862, Lee’s army won its most lopsided victory of the war when Union commanders sent wave after wave of troops to attack the stone wall at the base of Mayre’s Heights.

Chancellorsville in May 1863, however, was the partnership’s masterpiece. Outnumbered almost three to one by Union forces under General Joseph Hooker, Lee nevertheless divided his army and sent Jackson on a flanking movement against the Union right. “Both men realized the potential,” writes Keller, “and completely trusted the other’s judgment. Lee was audacious enough to envision it and Jackson perfectly suited to execute it.”

Union forces on the right flank were caught totally by surprise and were routed. Jackson’s troops kept moving forward until darkness set in. Keller judges Jackson’s advance at Chancellorsville to be “the finest one day’s worth of fighting the Army of Northern Virginia accomplished in its four-year existence.”

It was nevertheless a costly battle for the Army of Northern Virginia, and the Union could replace its casualties far more readily than the Confederacy. Lee and Jackson understood this and believed the only solution was to invade the north again.

The cost to the Confederacy was even higher when Jackson was wounded by friendly fire as he road ahead to conduct a personal reconnaissance in the dark. His left arm was amputated, and he died a few days later after contracting pneumonia.

Keller shows that the loss of Jackson was personally devastating to Lee. He had lost his most trusted and most gifted subordinate officer. Lee’s strategy, however, stayed the same—invade the north, win a major victory, threaten Washington and other northern cities, and achieve a favorable political settlement.

Keller writes that Jackson’s death was a “turning point in the war that boded ill for the independence of the South.” Keller shares the view of some other Civil War historians that the Gettysburg campaign might have turned out better for the South if the Lee-Jackson partnership continued.

This school of thought argues that Jackson would have taken Cemetery Hill on the first day at Gettysburg (or at least would have tried to take it), and Jackson’s aggressiveness would have substituted for General James Longstreet’s alleged lethargic movements on the second and third days of the battle.

More fundamentally, the loss of Jackson “from Lee’s immediate command team,” writes Keller, “broke up its tried and tested synergy, destroyed the closest personal relationship Lee enjoyed within it, and removed the individual best suited to Lee’s style of command.”

Keller assumes that the fate of the Confederacy was determined by the results in the Eastern Theater of the war. That assumption, however, has been challenged by other Civil War historians who view the West as the pivotal theater of the war. This school of thought views Vicksburg, the battles in Tennessee, and Sherman’s Atlanta campaign and “march to the sea” as crucial to the North’s ultimate victory.

Even if Keller is correct that the Eastern Theater was decisive, it is doubtful that a Confederate victory at Gettysburg would have changed the war’s outcome.

When President Lincoln placed General Ulysses Grant in command of the Union armies, and when Grant took command in the East, Lee for the first time was pitted against a Union commander who waged war as ruthlessly and relentlessly as he did.

In the Overland Campaign of 1864, Grant conducted a merciless battle of attrition that wore down the Army of Northern Virginia. It is hard to see how Jackson’s presence would have fundamentally changed things.

Keller concludes with what he calls “insights on leadership drawn from the Lee-Jackson partnership.” First, it is critical to pair a strategic leader with a strategic adviser. With Lee and Jackson “ideas moved freely in both directions.” So, too, did trust and respect.

Second, a command team works better if true friendship exists among the leader and his subordinates. Such friendship, Keller writes, promotes a “greater sense of professional ease and trust.” It helps if that friendship is underpinned by shared values and perspectives—in the case of Lee and Jackson religious faith deepened their friendship.

Third, in building a command team, the leader should “mentor and groom” his chief subordinates. This bolsters trust and enables a leader to rely on the judgment and decision-making of his key team members.

Fourth, a leader must be able to adjust his strategic vision and adapt his leadership style when key subordinates are lost. Keller believes that Lee failed to do that when Jackson died, and it cost him dearly at Gettysburg.

Finally, leaders must recognize opportunities to exploit those occasions when “the tactical, operational, and strategic levels of war converge.” Keller believes that Glendale (during the Seven Days) and Chancellorsville presented such opportunities, which for various reasons Lee failed to fully exploit.

Christian Keller has proven once again that we can still learn much from the history of the American Civil War. The Great Partnership is a thought-provoking book on leadership relations based on the mostly successful partnership of Robert E. Lee and Stonewall Jackson.