The Great Domaines of Burgundy: A Guide to the Finest Wine Producers of the Cote d'Or, Third Edition 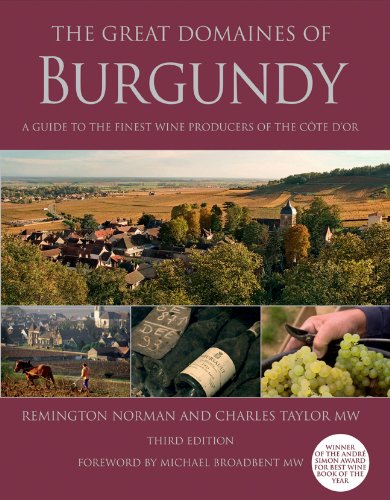 There was a time, up until the early 1980s, when someone of relatively modest means could, if interested, buy the great wines of Burgundy, the grand crus and premier crus, on a fairly regular basis, and become knowledgeable on a first-hand basis of differences between vineyards and producers. Grape growing and wine production methods have seen great improvement worldwide and in Burgundy itself, and the question of whether the great Burgundies of that time were as good as those made now is a bit like arguing over how Babe Ruth would do up against the pitchers and fielders of today, but they sure were tasty at the time.

Today, prices of the better grand cru wines start in the three figures, and premier cru wines are not far behind. Most wine drinkers, were they to venture into the Burgundy aisle, would need to make do with a village wine like a Gevrey-Chambertin, or a regional Bourgogne Rouge, which in fact can be pretty good, but the higher level wines are beyond reach, except for perhaps a very special occasion.

For this Third Edition, Charles Taylor substantially updated the text of Remington Norman’s 1996 Second Edition, and increased the number of winemakers covered from 130 to 141. After a brief introduction by Michael Broadbent, there is a four-page introduction, discussing the scope of the book and highlighting recent trends in Burgundy, both welcome and unwelcome.

Most readers will probably want to read the introduction and last 40 pages all the way through first, and they will be rewarded with relatively detailed discussions of a wide variety of topics, first giving the reader an introduction to the French system of Appellation Contrôlée in general and more specifically how it applies to Burgundy. This method is continued through the rest of the end of the book, as the authors discuss climate issues for grape growing in general and in Burgundy in particular, soil, the two main Burgundy grapes Pinot Noir and Chardonnay, grape growing, wine making, the use of wood, how Burgundy is sold, and how one should buy it and taste it. These sections are particularly useful in explaining the changes that have been made in Burgundy the last thirty years or so.

The last pages contain discussions of the vintage years from 1971 through 2009, and then a glossary of wine terms, which is especially useful in that the authors tend to use the French term for many wine processes that one has probably learned in English. Thus, for example, the process of removing excess buds from the vine to limit yields (making more concentrated wine) is referred to in the text as évasivage. This reviewer, at least, needed to keep a finger in the glossary while reading.

The notion of “only” four pages of introduction and forty pages of discussion of Burgundy wine is misleading, in that with fairly small typeface, little line spacing, two or three columns, and tiny margins, the book manages to cram over a thousand words to a page without photographs (although the book has photos on the majority of pages). The 288 pages of the book are utterly packed with information.

Getting a better sense of the viticultural and winemaking options, and how they affect the final product, is useful for getting into the heart of the book, which is a profile of each of the villages, or communes, of the Côte d’Or, and of 141 producers. These producers were chosen, the introduction states, primarily on the basis of two considerations: “first, absolute quality—the ability to produce something especially fine, in its class; and second, consistency—that dimension of year-on-year excellence that gives one the impression that a bottle from this domaine, whatever its appellation or vintage, would rarely disappoint.”

Given that these 141 producers collectively own approximately 2,000 hectares (a hectare equals 2.471 acres), and the entire Côte d’Or has 9,505 hectares of vineyards, the book covers less than 22 percent of Côte d’Or vineyards. And given that all of Burgundy, including Chablis to the north of the Côte d’Or and the Côte Chalonnaise and Mâconnais to the south, contains over 28,500 hectares of vineyard, it is likely that most of the bottles of Burgundy on the shelf in front of you in the wine shop were not made by one of these producers.
The goal of the Great Domaines of Burgundy, however, is not to be encyclopedic, but to highlight the best producers. The reader is not likely to read all 141 profiles, at least not at once, but instead to use it as a reference. The reader might first, as this reviewer did, look at his or her own Burgundy collection to see if any of the bottles are from the vaunted 141 (yes!), and then read those profiles, which will tell the collector far more about the producer than he or she knew when the bottles were acquired.

Each profile generally contains a history of the domaine, a profile of the owner and/or wine maker, a discussion of the winemaker’s choice of oak, fermentation and aging methods, and a description of the separate vineyard plots and the wines that are typically produced from each plot. This would enable the ambitious Burgundy lover to put together wine tastings that attempt to bring out the effects of different wine making styles. For instance Michel Gros of Domaine Michel Gros uses some different techniques than does his brother Bernard Gros of Domaine Gros Frère et Sœur or his cousin Anne Gros of Domaine Anne Gros, and they all make a village Vosne-Romanée that should otherwise taste very similar. It would be hard to do this in a systematic way without this book.

The book would also be useful when a wine merchant’s catalogue arrives with some Burgundy producers that the reader is not familiar with, helping find which producers are worth the risk. The authors point out that there are some 80 different owners of the grand cru vineyard Clos de Vougeot, for example, and the reputation of the producer is a better indicator of a wine’s probable quality than the name of the vineyard on the label.
The book is less useful for wine tourists coming to Burgundy. The locations of the domaine’s premises are not noted on the maps, and the profiles contain no contact information. The authors note that many domaines are not interested in visitors, and those visitors that come are not likely to be able to get any wine on premises, but that there are other domaines where “receiving visitors is a part of their way of life.” It might be helpful to know which ones are which.

The authors are specialists in Burgundy, and they tend to believe that wine from Burgundy is at a level above all others. They state, for instance, that “Although growers throughout the viticultural world have scaled notably greater heights with Chardonnay than with Pinot Noir, their untiring efforts to match the restrained depth and power of the Côte’s white grand crus continue to meet with limited success. There is a dimension of understated elegance and class in a fine Corton, Meursault or Puligny, which seems to defy mimicry.” Of course, in the famous “Judgment of Paris,” the 1976 blind tasting of wines by a panel of French wine authorities, California Chardonnays were ranked above a Meursault, a Puligny, and a Bâtard-Montrachet, a result that has been repeated in subsequent taste-offs. One can write about subtle differences between wines produced from two adjacent vineyards, but it is likely that even these authors might mistake a California Chardonnay for a Meursault when tasting blind.

Factual errors, at least as noticed by this reviewer, are few and minor. For instance, on page 249 the authors note that the agrément, when the wine is certified as meeting the qualifications for Appellation Contrôlée status, used to be conducted between 15 November and 15 April following the harvest, but is now only granted once the wine has finished its winemaking process (élevage). But the Glossary definition of agrément on page 282 does not note this rather important change in the process.

The Great Domaines of Burgundy is not a starter wine book, but it is a book for anyone who has come to love Burgundy and wishes to learn much more.