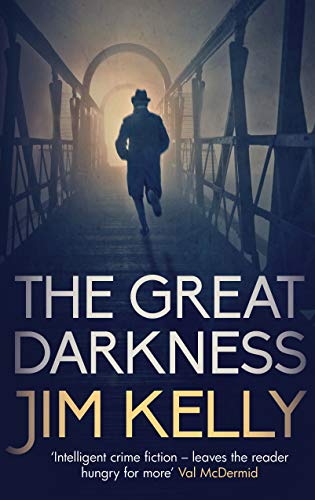 World War II is well covered in literature and history, but in The Great Darkness, first volume in the new Nighthawks series, Jim Kelly comes up with a fresh take—at least for historical fiction readers. Experts in the subject might be familiar with some or all of the surprises covered in this tale, but for the rest of us, they are new.

The novel is set in Cambridge in the early days of the “phony war,” when England was officially at war with Germany but nothing was quite happening yet, compared with the bombardment to come. The country was setting defenses in place, such as barrage balloons (blimps tethered to the ground by cables to interfere with aircraft attacks) and all-night blackouts (the Great Darkness of title).

For the anxiously waiting citizenry like Detective Inspector Brooke, the war is more about collateral damage than battle. Bodies aplenty fall upon his turf, starting with the casualties of three local barrage balloons getting loose and wreaking havoc. Soon events escalate to include murder, suicide, black marketeering, illegal night climbing, subterfuge, corruption, blackmail, and betrayal.

Most of these dark doings occur in the literal dark, where DI Brooke spends most of his time. Without special glasses he can’t work during the day, having been injured in the previous war and become hypersensitive to light. He’s plugged into a network of “nighthawks” who operate in the shadows. These aren’t the usual underground players like drug dealers and thieves, rather, a selection of individualists who prefer or need the night to conduct valid business and lifestyles.

Darkness is the prevailing theme of the book, in all its tangible and conceptual forms. Yet it’s not a depressing story. Gloomy, yes; but as a police procedural at heart, it digs down through the dirt and darkness to find light on the other side.

The prose is direct, bordering sometimes on blunt, but always clear. The author ably captures the city, region, and period without overdescription—an impressive feat given how much occurs in the shadows.

Overall, the novel has a “film noir” feel. Not just because of the darkness theme, but also the narrative’s cinematic structure. Each short chapter is a single scene ending with a cut at the right moment of tension or revelation, then the “camera” switches to a new place, situation, or point of view and zooms or pans, highlighting exactly what needs to be seen.

This chain of scenes steadily fits the story pieces into the main puzzle, moving the plot forward while filling in backstory until all makes sense. But even when the subplots come together and the main mystery is solved, sadness lingers in the air like smoke.

The cruel irony underneath the story is shown in this paragraph, where DI Brooke, trying to do his duty on behalf of an individual killed on his beat, is stonewalled by the military’s duty to the larger population:

“We’re wasting time on this, Inspector. This was one man . . . [but] This war, it’ll kill thousands. You know that. Hundreds of thousands. They’re the dead and the dying, Brooke, while we sit here. In Poland, out in the Atlantic. There’s no rhyme or reason, is there? . . . Pick our way over the battlefield asking: and this one, how did he die? No one has a right to justice, that’s what a war is, Brooke, a suspension of normal rights. What makes [the dead man] so special?”

Brooke cannot argue, but he also cannot give up on finding answers. That doggedness leads him to discover more than anyone wants to know.

Readers, of course, will keep turning pages until they know the truth, too.